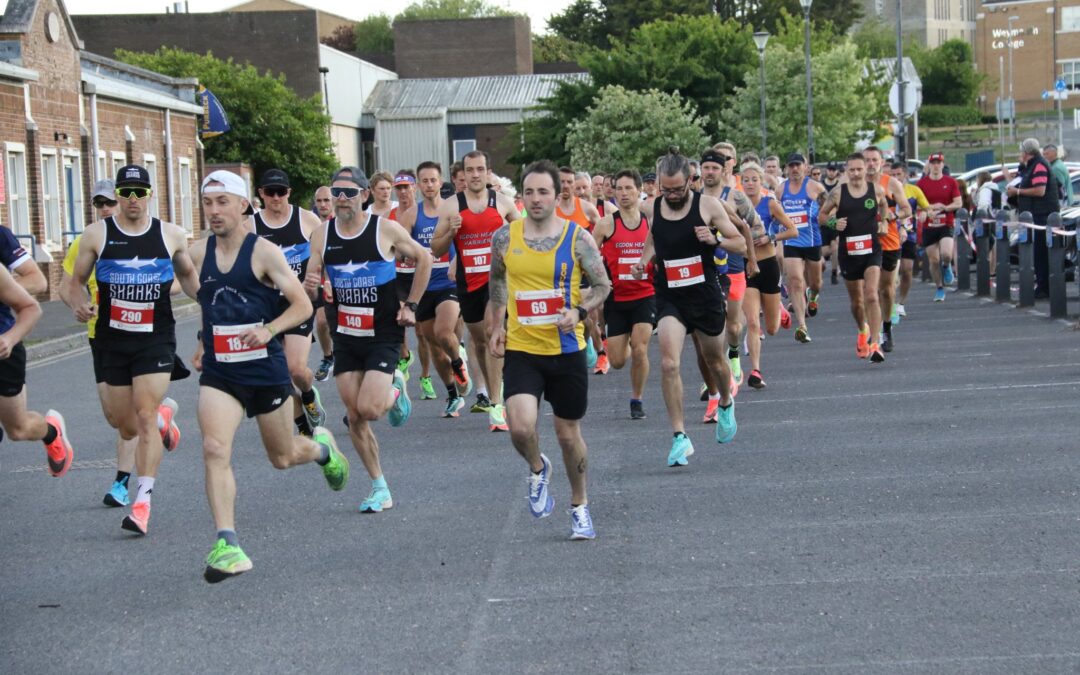 What would be your favourite way to spend a Saturday night? Out to the pub for a few drinks perhaps?… A barbecue in the garden?… A chilled out one in front of the TV with a glass of wine and a takeaway?… Well, if you live in or around the Weymouth area, one recent option on the table was to run a fast and ferocious 10k race around Lodmoor Nature Reserve and Country Park.

It was even enough of a attraction to lure a few of Bournemouth AC‘s finest to table, with Adam Corbin, Rob McTaggart and Nikki Whittaker all keen to get a piece of the action. They may perhaps also have been tempted by the promise of a fish and chip supper on the beach afterwards.

The Egdon Easy 10k was Tag’s first competitive race since his phenomenal 2:25:40 marathon PB at Wrexham in April. He wanted to ensure he’d given his body adequate time to recover before getting back to the cut of thrusts of race environment.

His partner Nikki, who also runs for Bournemouth AC, was keen to do the race though so Tag though he may as well come along and throw his hat into the ring. In truth, he was expecting to be able to win a small league race like this with no qualms. But of course, you never know else is going to turn up on the day.

With the form he’d been showing lately, Adam Corbin should also have been expecting to be right up there. He’d had an excellent run in the May 5 the previous weekend, finishing in 6th place in a time of 27:55, at an average pace of 5:35.

He also ran a superb half marathon PB of 1:17:26 at the Bournemouth Bay Run and put in an excellent performance in the Southern Road Relays in Milton Keynes.

Also present in the May 5, Nikki had a pretty decent run to get round in a time of 42:56, which, considering she usually struggles in the heat, was a good result. She had also been in 10k action earlier in the year at the Chichester 10k where she recorded a time of 52:21 in very windy conditions.

The race started with one small loop in the country park, followed by two big loops. Most of Tag’s recent 10ks had been done and dusted in around 33 minutes and he’d had a few sub 32 minute ones on his resume.

For the majority of the race though it was Mike Parrott of Running for Time who was out in front with Tag sitting in behind. That was quite a good tactic for Tag, since they had to lap a lot of the slower runners when on their second loop.

Adam started off quickly as well, recording a 5:12 in his first mile. At that point he was 4th but he was starting to get a stitch and couldn’t give anything more. The guy ahead of him then stopped and he went past to assume third position.

Going at around 5:30 pace or just over for the remaining miles, Adam managed to maintain his speed well, despite having to keep overtaking the back-markers on the second big loop. 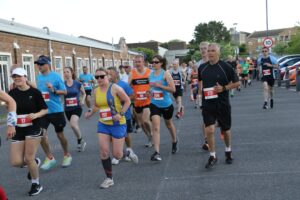 Nikki Whittaker looked a cool customer in her shades

Since it was a very warm evening, Nikki decided to take it steadier and aim for around 8:45 to 9 minutes for her mile splits. She was able to go along at that pace quite consistently throughout the run.

It wasn’t looking like it was going to be the easy win he was expecting for Tag and Mike Parrott was up there pushing all the way and it was beginning to look like Tag would really have to work for it.

In the end the race was decided on one momentary lapse from Tag at about the 9k point which enabled Mike to gain a bit of an advantage. Once that had happened, Tag was unable to reel him back in and Mike made to the line first in 32 minutes 44 seconds.

Just three seconds later, Tag arrived at the line to seal the runner up spot in 32:47. It wasn’t the result he wanted but it was still a fairly decent time from Tag given that it was his first race back since the marathon. 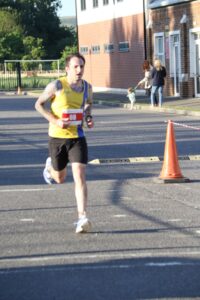 It was a very strong and solid run from Adam and he secured 3rd place, crossing the line in a time of 34:05. That put his average pace for the run at 5:29. It was enough to see him finish a minute ahead of Egdon Heath Harriers’ very own Martyn Bell who took 4th in 35:03.

Jon Churchill recorded a 5th place finish in 35:08 ahead of the next Egdon Heath Harriers man Daniel Hull who was 6th in 35:23. He took the prize for first M40.

The battle for the first M50 was contested by Twemlow man Steve Cook and John Bassinder of Poole AC and it was the John who came out on top, getting to the line in 36:13 to take 8th place overall.

Steve arrived 22 seconds later to claim 9th place overall in a time of 36:35. Considering he’d had quite a lengthy spell out through injury, that was a pretty good time from him.

Purbeck Runners man Julian Critchlow was the next man over the line and he took the prize for first M60, completing the course in 36:48. 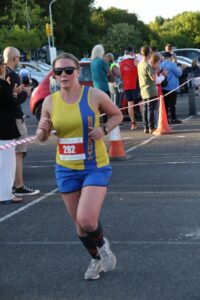 Molly Rasch of Dorset Doddlers was first female, recording an excellent time of 36:54 which put her in 12th place overall. That was just ahead of Egdon Heath’s Jamie Barrington who was first under 19, clocking a time of 37:07.

Amy Hallett of Running for Time was 2nd female, getting in in 40:24 which put her 42nd overall. Then it was Hannah Martyn of Egdon Heath Harriers taking 3rd female spot in 41:22.

Nikki got round in 54:40 which made her 45th fastest female and 159th overall. She was pleased with how even her splits turned out and was even more pleased about the fish and chips she got on the beach at the end, as was Tag who said it was the highlight for him.

Tag and Nikki will both be in action at the next Dorset Road Race League encounter which is the ‘one-off’ summer spectacular edition of the Round the Lakes 10k. Bournemouth AC have assembled a squad brimming with talent and depth as well as numbers and they will be very much hoping for a win in the men’s first division at least.