Almost a very happy homecoming for JC at Maraton Juranda 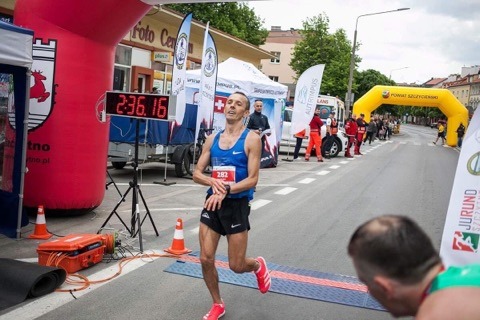 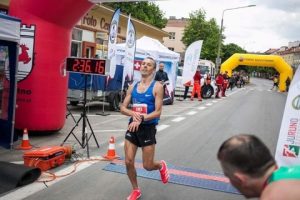 Jacek Cielusecki went back to his roots, returning to the town of Szczytno, where his running journey first began, for the 30th edition of the Maraton Juranda

Going back to the place where it all began, it was an emotional occasion for Jacek Cieluszecki as he returned to Szczytno in Poland for the 30th edition of the Maraton Juranda.

The Maraton Juranda is actually one of the oldest marathons in Poland, dating back to 1981 when it was first established. As any eagle eyed mathematicians will have noticed, that is more than 30 years ago but the race was actually suspended for an eight year period, meaning this year was the big anniversary.

Since it is staged in his home town of Szczytno, Jacek had had the idea of making a triumphant return for the 30th edition of the race. It seemed only right that he should do so since this was the place where he started his journey with running.

Szczytno is located in the North Eastern region of Poland and was in fact formerly a German city named Ortelsburg. It was only towards the end of World War II that the Germans were driven out and Poland re-established the territory. The city was then placed under Polish administration.

It was the year 2000 when Jacek first started running. At that time he was 23 years old. He ran his first marathon in Szcytno in 2003 finishing in a time of 3 hours 36 minutes. He’s certainly come a long way since then it would be fair to say.

Because the Maraton Juranda is quite a small race and the standard isn’t usually that high, Jacek fancied his chances of picking up the win. It was only when he got onto the start line and saw Wojciech Kopeć that he realised he was going to have a real fight on his hands.

Kopeć is a very accomplished marathon runner and with a PB of 2:17. He’s not quite as strong at the moment but still very quick by peoples’ standards. 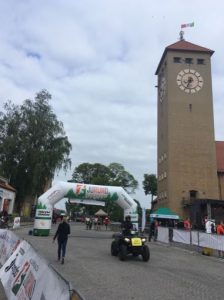 The start line of the Maraton Juranda, next to Szczytno’s answer to Big Ben

As the race got underway, it quickly became evident that it was going to be between Jacek and Wojciech. The course is very flat, giving the competitors every chance of a fast time if they’re on their game.

For the first six miles Jacek was going at around 5:50 sort of pace. Wojciech was slightly ahead at that point and had build up a slender advantage. There was a 10 second gap between them as they went through the 11.5km point, with Wojciech going through in 42:41.

From that point on the race was on and Jacek knew he had a tough task ahead to close the gap. He continued to blast through the miles at just over 6 minutes per mile for most of them.

He was feeling good but a little sluggish and he just couldn’t seem to accelerate any faster in order to close the gap. There was never more than 90 seconds between the pair of them though and in the later stages of the race, Jacek was beginning to clawback some time.

He really pushed hard on the last couple of miles, upping his pace to 5:50 but in the end it wasn’t quite enough and Kopeć took the win. Finishing in 2:35:59, he successfully managed to hold off the challenge from the homecoming hero JC.

There was only 17 seconds between them in the end though, with Jacek crossing the line in 2:36:16. After a full 26.2 miles of running, that’s a very small gap for a winning margin but it was enough.

JC crossed the line in a time of 2:36:16 after having done all he could to close the gap between himself and Wojciech Kopeć who picked up the win

It was a disappointing result for Jacek as he would have loved to have been victorious, but it was still a fantastic effort all the same. With an average pace of 5:56 for the run, he couldn’t really have asked any more of himself. It just wasn’t to be on the day.

It was the second time recently that Jacek had been forced into the runner up spot by a fellow Polish national. It also happened at the Wings for Life World Run event in Sunrise, Florida, where Dariusz Nożyński had a gap of just over two kilometres on JC after they’d run for over 30 miles evading the chase of the Catcher Car.

Of course, Jacek has still won his fair share of races over the past few months, including the Maverick inov-8 Original Dorset ‘Short’ route, the East Cliff Easter Quarter Marathon, the Dorset Ooser Marathon, the Weymouth Half Marathon and the Portland Coastal Marathon.

With the winning mentality that he has, it’s never feels like a success to Jacek when finishes second. The following weekend it was a double-race weekender for Jacek as he took on the 5k and the 10 at Poole Running Festival.

This Sunday he’ll be hoping to set the record straight and get back to winning ways at the Puddletown Plod Half Marathon which is the next fixture in the Dorset Road Race League calendar. 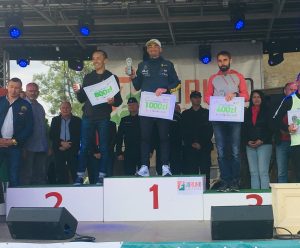 After a close battle, Jacek had to settle for second place on this occasion but he still received a trophy and a cheque for 800 Zloty, which is about £167