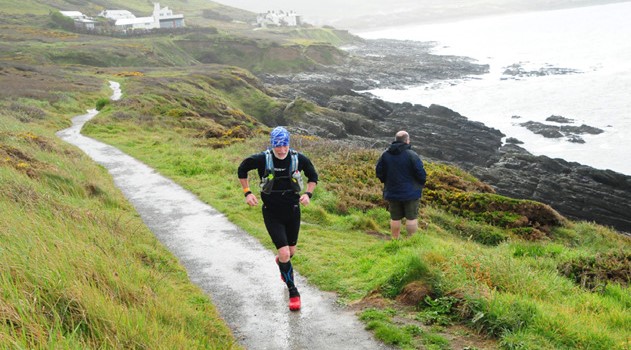 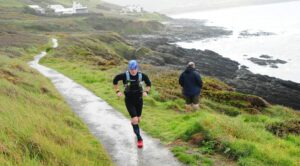 Even the abhorrent weather couldn’t dampen Andy Gillespie’s spirits as he went on a tough, yet character building journey at the Devon Coast Challenge

One day he was at the clinic receiving his second Pfizer vaccine injection and the next he was embarking upon a three marathons in three days adventure at the Devon Coast Challenge!

It was a real sign of the times for Andy Gillespie. But having seen some of the coastal races he would normally do cancelled, Andy wasn’t going to pass up this opportunity for anything.

It was almost as if the jab had given him an air of invincibility and he was determined not to give up, no matter what the event threw at him. In fact, Andy was yet to quit one in all of his 106 previous marathon attempts so he wasn’t about to start now.

Tackling some very inclement weather on the way, it turned out to be one that would really test Andy’s resolve but his never say die attitude enabled him to get through it.

Not only did he survive the tough conditions though, he actually excelled in them, which says a lot about the character and grit that Andy possesses.

The trails were truly treacherous after a period of unseasonal rainfall and several of the runners dropped out after the second day, unable to face another soaking for the third day on the trot.

The Devon Coast Challenge event is put on by Votwo and is the most recently devised of the coastal challenge series, now in its fourth year. It’s thought to be every bit as scenic as its Atlantic and Jurassic Coast counterparts, as Andy will be able to verify having done them all several times.

The route takes it’s participants on its 78.6 mile journey from Hartland Point to Porlock Bay, passing through picturesque coastal towns and villages such as Croyde Bay, Lynton, Lynmouth, Ilfracombe, Woolacombe and The Valley of the Rocks.

The terrain is wild and rugged with many steep climbs to scale and plenty of tricky descents to negotiate as the runners follow the acorn signs as they work their way along the South West Coast Path.

Day One is from Hartland Quay to Appledore. The course incorporated over 5,000ft of elevation and, although it was wet and slippery in places, Andy recorded a huge PB for the day, finishing in 6 hours and 28 minutes and 52 seconds. That put him in 15th place in the overall standings out of 57 runners who successfully negotiated the route.

The second day was Crow Point to Combe Martin and included another 4,900ft of elevation. Again it was very wet and slippery but Andy wasn’t perturbed by that and managed his fasted every Day Two time for the DCC. And that was despite the fact that the course was half a mile longer due to a change to the finish area.

Clocking a time of 6:17:53, Andy claimed 19th position in the rankings for the day. That was out of 62 runners who successfully completed the marathon for that day. Of course, you do get entrants who just do one of the marathons. Not everyone involved is mad enough to attempt all three!! 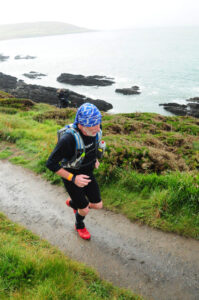 It was a long, lonely road for Andy on Day Two of the Devon Coast Challenge but he pushed through it well

The worst of the weather was still yet to come though and that arrived on Day Three, which was the final stretch from Combe Martin to Porlock Bay.

On that particular day, it really did chuck it down. So much so that only 50 odd out of the 76 who were on the start list actually turned up.

Quite a few of the runners managed to miss the first checkpoint at Hunters Inn. Andy feels there’s no excuse for it these days really as you have the route, either on an app or on your Garmin.

Andy’s one usually told him within seconds if he veered off course. You do get the occasional issue with satellites but they soon reconnect and put you right. Andy accidentally went down someone’s drive on Day Two!

It was raining so hard that for around 15 miles of the route most of the trails had transformed into streams or rivers. Then after that they were just mud.

There were a couple of short road sections that provided a temporary relief but it was a real battle all the way. In terms of elevation gain, this was the toughest day as well, with 6,770ft of climbing to get to grips with.

At checkpoint three, Andy was 6th out of those who started in group 1. When he got to the finish though, he was 8th without anyone overtaking him and without him seeing anyone ahead of him or in the rear.

After the race Andy was quite vocal in asking the other competitors who cut the last two hills off. He did know of course though and they looked sheepish.

The correct route heads up a very steep climb at mile 21 but you can actually keep going straight and cut probably a minimum of a mile off. Andy has never taken that route though of course.

The guy who arrived at the finish just after Andy must have cut that bit off as he was nowhere in the distance behind whilst Andy was still running.

Although the organisers say that cutting that bit off isn’t in the spirit of the event, they never clamp down on it or penalise people for it. It’s frustrating for Andy as he is always honest and takes the designated route and could potentially lose out in the final classification because of it.

At least he knows he’s done the full route though which is really what counts. Closing out the challenge with a time of 6:59:07, Andy was 15th quickest overall on the day out of the 45 runners who made it round.

With a total combined time of the three days of 19 hours 45 minutes and 52 seconds, Andy finished in 13th position in the final standings. That was actually much higher up than he usually finishes and bettered his previous best time of 21:12:42, which he did in 2019, by 1 hour and 26 minutes. 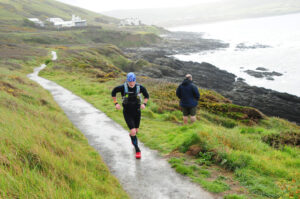 After getting round in the fastest time of Day One and Day Two and the second fastest time on Day Three, Nerys Jones was the overall winner with a total combined time of 15 hours 44 minutes and 51 seconds.

That was 29 minutes and 30 seconds quicker than Sarah Thompson who finished runner up. She was 4th on Day One, 2nd on Day 2 and 5th on Day 3.

With a total combined time of 16:31:37, John Lewis was 3rd on the leaderboard after finishing 6th, 3rd and 6th. Daniel Constable took no prisoners, finishing 4th with his cumulative time of 16:33:20 after he finished 5th, 10th and 3rd.

After he was quickest out of anyone on Day Three, Sean Rice finished 5th on cumulative time with a total of 16:45:21. That was after coming 7th on Day One and 9th on Day Two.

It was a huge improvement for Andy and represented clear progression. It had been a real test of strength, stamina and character but, as usual, he had passed that test with flying colours, coming out of it with another three marathons added to his tally and some great memories to look back on.

The nurse that had given him his COVID jab the day before the event had said to Andy that he may feel a bit fatigued and, after this excessive, three day exertion, she had been proved right!

Next up for Andy it’s the Jurassic Coast Challenge which is now scheduled for July. That race has been cancelled three times so it will be good to finally get it done.

The JCC is usually held in the latter stages of winter so it could be a very different event in the heat, especially since there’s not a lot of shade on the Jurassic Coast. Whatever the challenges though, you can guarantee that Andy will conquer them and get through it, as he always does.