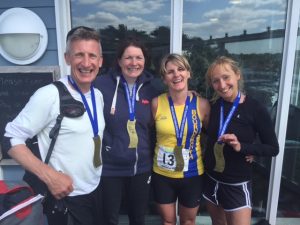 Caroline Rowley and fellow competitors (all of whom are known to us!) at the Arun River Marathon

Caroline Rowley introduced herself to trail running on 14 May, not just any trail running, but over marathon distance! This was the Arun River Marathon, which Caroline completed in 4.24.38, to finish as 5th lady. Caroline declared herself as “happy” with the result, although, not being used to trail running, she “found it tough”. As anyone would!

Further north, Simon Hearn was flying the BAC flag in the Chester Half Marathon.  Simon‘s time was 1.29.56 and he finished 243rd of a total of 5243, 26th in his age category.  Of the event, Simon says “it was a good course, nice and sunny and had a great day, the only nasty bit being a hill at the end, which lost a bit of time”.  It sounds as if a sub 1.30 time for this race is something to be proud of!

Returning to the Dorset County Track and Field Championships at Kings Park, apologies to Bridget Dence for omitting to mention her Championship Best Performance in the report on this website.  In the JW 1500m, in which she won a gold medal, Bridget ran 4.41.0, beating the previous CBP of 4.43.7 which has stood since 2011.  Many congratulations to Bridget, who has remained a consistently excellent performer as she has progressed through the various age categories.