BAC stars roll with the punches in Round the Lakes 10k 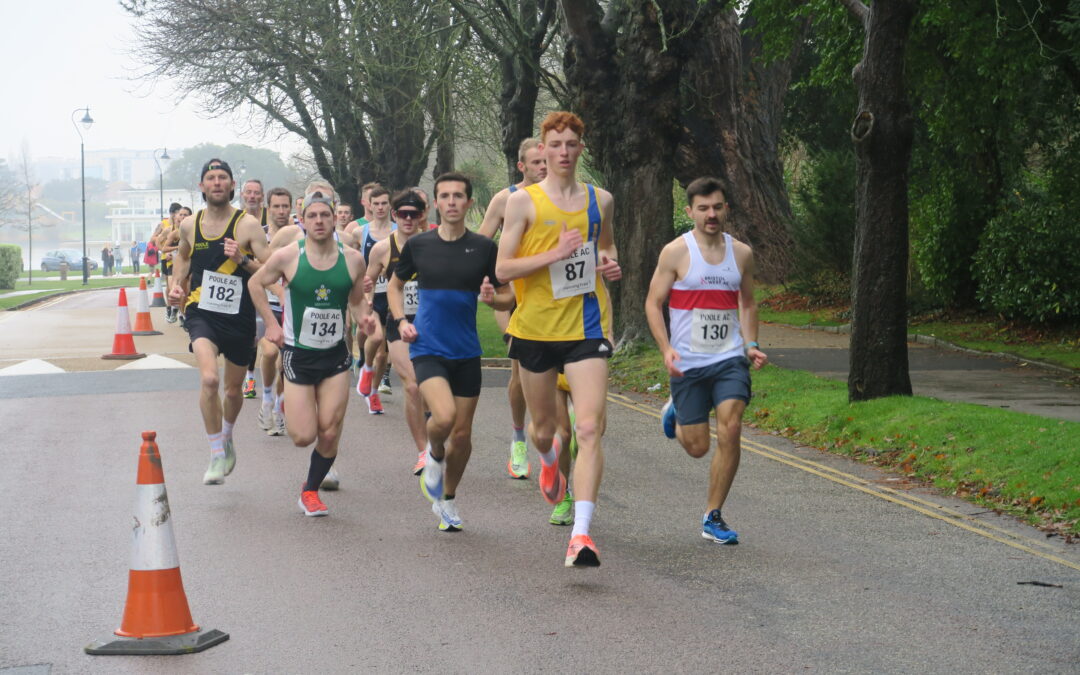 Presenting athletes with a great opportunity to run off all that excess turkey, mince pies and Christmas pudding, the Round the Lakes 10k is always a popular outing amongst the Bournemouth AC fraternity. And the 2021 edition was no exception, with six club members heading over to Poole Park for their annual dose of festive fun of the racing type.

Returning to the scene of the race he won back in 2015, Rob McTaggart was in action again and in the form he’s been in lately he was well capable of getting in and amongst the lead positions.

After a 31:50 in the Telford 10k two weeks prior and a 1:10:48 half marathon at Reading the month before, he’d showed signs that he’s still very much at the top of his game. 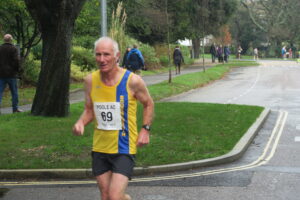 Tag has had a pretty good record in the Round the Lakes 10k over the years as well, finishing 3rd in both 2013 and 2014 before he claimed his victory in 2015. There was also an additional race in February back in 2011 which he finished second in, behind Jacek Cieluszecki.

There was also a Bournemouth AC winner in 2016 when Disco Dave Long produced an incredible time of 31:40 to fend off competition from Daniel Mulryan of Poole Runners. Then back in 2002, Louise Damen finished as first female and was fourth overall with a terrific time of 33:58. 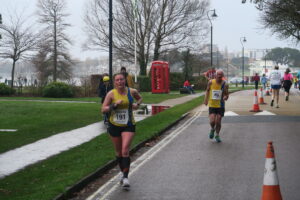 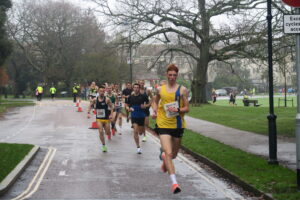 Joining Ollie in Boxing Day blaster was another BAC member who has impressed throughout 2021, Trev Elkins. As well as getting married and fathering a baby boy, Trev has recorded PBs in parkrun, 5 mile, 10k and 10 mile distances. His 10k best was currently 37:24, which he did at Eastleigh in August.

Trev Elkins had had a pretty strong year

After struggling to reach her full potential in the Telford 10k, Nikki Whittaker was pleased to get another stab at the distance. She’d recorded an excellent 5 mile PB at the Victory 5 the previous weekend so she knew she was in shape to for a good run if she could turn it on on the day. 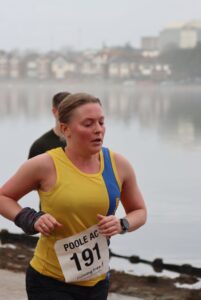 Nikki was looking to show what she’s capable of

Despite being well into his 70’s, Ian Graham has still managed to keep his running pretty regular and, although he may have lost a bit of speed, he certainly hasn’t lost his enthusiasm for racing. Competing in both the first two Wessex League cross country fixtures and the Hampshire League match at Aldershot, Ian also engineered another very successful event in the first Hampshire Cross Country League fixture of the season at Kings Park. He also competed in the Boscombe 10k in November, finishing in 52:53, which gave him a benchmark to try and beat. 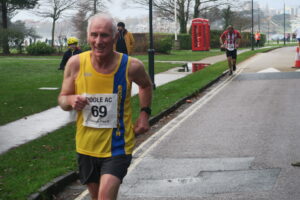 Ian was ready to give it his best shot

In keeping with her usual Boxing Day tradition, Kirsty Drewett ran the race with her dad Robert, who is now 70 years of age. Kirsty also enjoys the cross country fixtures and has competed in Hampshire League and Wessex League fixtures this season as well as helping out in the event the Bournemouth AC hosted. She also completed the insanely hilly Hellstone Marathon in October, never afraid to test herself on the toughest of terrain. 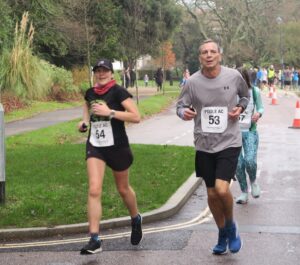 Kirsty Drewett with her dad Robert

After finishing third in the last two years at the Round the Lake 10k, Sam Costley of Southampton AC came out on top this time round, finishing in a stunning time of 30:50. That was just enough to edge him ahead of his clubmate Rikki James who crossed the line in 9 seconds later to take the runner up spot. 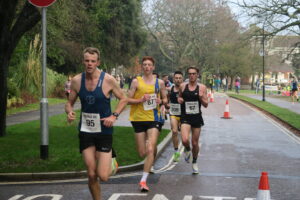 It was a 10k debut for Ollie James and he did not disappoint, finishing in 6th place in a time of 33:14. He completed all of his miles at between 5:16 and 5:24 pace, giving him an average of 5:17. The weekend before the Round the Lakes 10k Ollie had run an incredible time of 15:36 at Moors Valley parkrun so it wasn’t surprising he was able to produce such a phenomenal performance.

He is really going from strength to strength and if he continues to train as hard in 2022 there will be some really exciting things to come from him. That journey would begin with the South West Inter County Cross Country Championships the day after New Year’s Day. 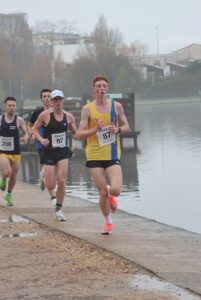 Callum Gillett proved to be the best a man from the Isle of Wight could get and the Ryde Harriers man took 7th place in a time of 33:20. Then it was Rob McTaggart, having to settle for 8th place on this occasion with a time of 33:24.

From Tag’s perspective, it was a pretty mediocre run and he just couldn’t find enough gas left in the last mile to contend with the other Dorset lads who finished just in front of him. 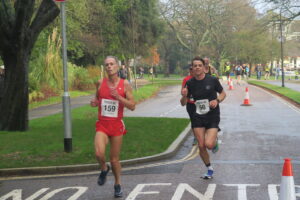 Dressed in festive red, Andrew Ridley was ready to give it his season’s best

Poole AC man Duncan Cooper was first M50, finishing in 35:10 to put him in 11th place overall. That was enough to see him cross the line just in front of Andy Leggott of Lonely Goat who got round in 35:19. Dion Garner of Poole Runners was 13th in 35:20 before a well known face around the Kings Park area, Andrew Ridley, reached the line in 35:31. 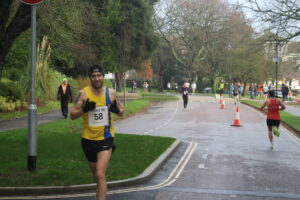 Trev was after a sub 37 minute time 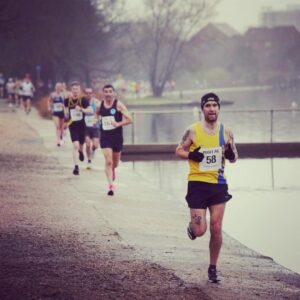 Hoping to get in under 37 minutes, Trev Elkins was on pace after the first 5k, going through in 18:24. Over the next few kilometres he slipped away a touch though before digging in well to salvage some list time over the last 2km. His finishing time of 37:44 put him in 22nd place overall. That wasn’t a bad return out of 167 participants and it was only 20 seconds off his PB. 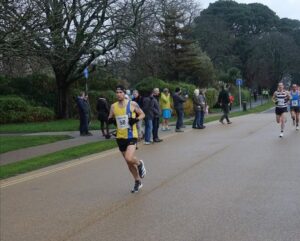 Dawn Andrews of Lytchett Manor Striders was 1st Vet Women, getting round in 40:44 which put her in 48th place overall. 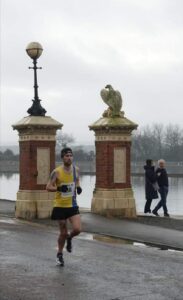 Pulling it round in the end, Trev managed a decent time of 37:44

Producing an excellent performance, Nikki Whittaker recorded a course PB of 51:12 to come in as 19th placed female. That put her in the top 100 overall and it was only 19 seconds off her PB of 50:53 that she set in the Christmas 10k back in 2018. 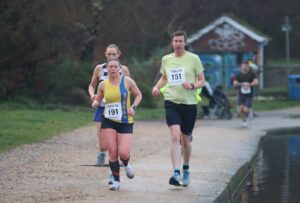 Her pace was very consistent, with the first four miles being between 8:04 and 8:09 minutes per mile. She then recorded an 8:15 and an 8:20 for the last miles before finishing strongly over the last 0.3 of a mile. 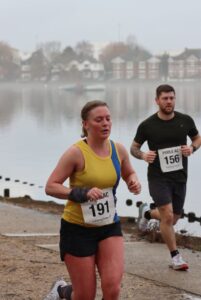 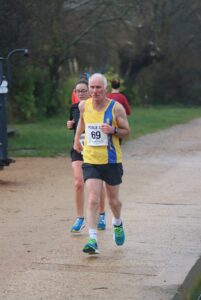 Ian ended up finishing second in the Male Vet 70 category

Kirsty Drewett was chuffed be there to chaperone her dad and see him hit his goal quite comfortably, finishing in a time of 57:35. That put him in 139th place, with Kirsty coming in a second later to take 140th. That run embellished the true spirit of the occasion rather well, since Christmas is a time to celebrate with family and loved ones. 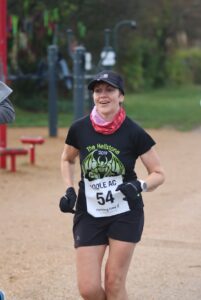 Kirsty Drewett enjoyed accompanying her dad on the run

It was a great way to end a fantastic year of running in the Dorset area, with races returning to full capacity and competition heating up as local rivalries were resumed. It was also a prelude for the comeback of the Dorset Road Race League, which kicked off on New Year’s Day with the Junction Broadstone Quarter Marathon. 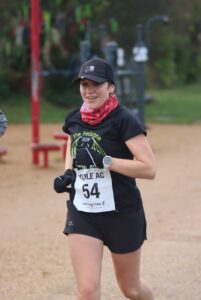