BAC Team Rise to the Occasion at the SAL, 2nd Place in Yeovil! 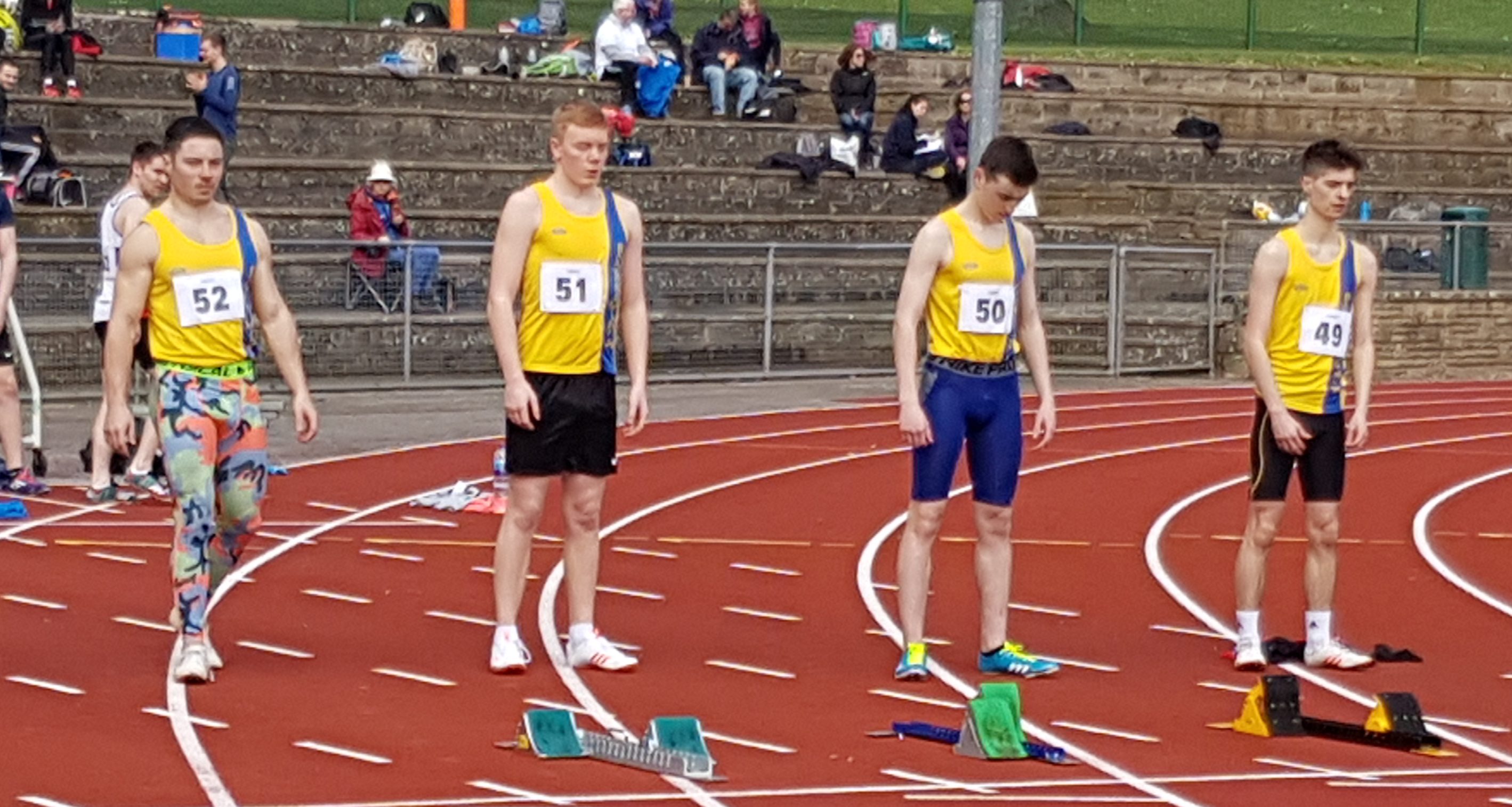 The Southern Athletics League (SAL) is the area track and field league for clubs in the SEAA region who wish to compete in joint (male & female) teams. There are 3 divisions and the top 2 teams at the end of the season will be promoted to the higher division.  BAC were last season’s Division 3 WINNERS and subsequently promoted to Division 2.  They welcomed the challenge and thrived against the higher level of competition.

Team spirits were high and enthusiasm flowed throughout the day, enhancing the true talent of BAC, not only the athletes but our outstanding officials, coaches and helpers.  The men and women’s team pulled together to cover almost every single event throughout the day.  They were rewarded with an outstanding 2nd place spot, just 21 points behind Yeovil. Oxford City AC and Portsmouth were behind with 159 and 139 points respectively.

The day started with a promisingly full coach and the usual buzz of the men and women’s teams. on board  BAC had the largest squad out for many a year and the weather was fantastic with the welcome sunshine to top things off.   The match kicked off on the field with the throw events at midday.

Women’s Hammer: The first to hit the stage and win both A and the B string was the talented Danielle Broom and Pheobe Dowson in the hammer.  This was a great start to the day and the bar was set high with top class performances against a strong field of athletes. Dannielle (18) threw a PB of 57.42m, almost 10m beyond the next competitor and set a new club and county senior record! Dannielle is now 2nd ranked junior in Great Britain, a great achievement.

Pheobe threw 43.72m to win by over 20m! Later in the day Pheobe went on to win the discus with a PB of 52.48m and another senior club record and is now ranked 2nd in Great Britain. Pheobe was selected for the 2018 European Winter Throws championships, finishing 4th in an International field.  Evidently her performance continues to improve. 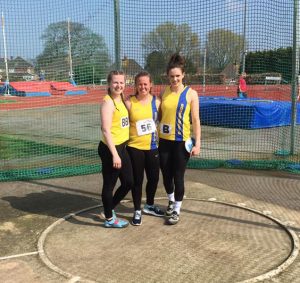 Men’s hammer throwers, Dan Brunsden and Andrew Sheerin stepped up to the mark with 2nd place in both A and B string against some tough competition. Dan’s 42.43m was close to the leader by a big cats’ whisker -1.8m. Andrew threw 26.56m to secure 2nd place behind Yeovil’s athlete.  Men’s Team Leader, Andrew also holds the British Masters Indoor Silver medal for Hammer and bronze for the weight throw.

The men’s shot putt was also a great success with winning throws by Dan Brunsden, 15.19m and Andrew Sherrin, 10.79m. 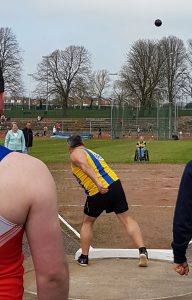 Women’s Pole Vault: Harriet Slade and Nikki Sandell competed in the Pole Vault to grab well-earned points for the club. Nikki jumped a PB of 1.90m and Harriet a respectable 1.20m as a first timer. Well volunteered Harriet! 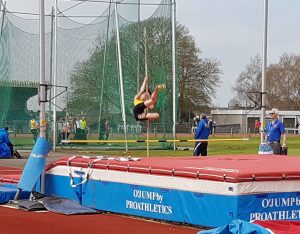 Nikki clearing the bar, by a mere 10 metres! 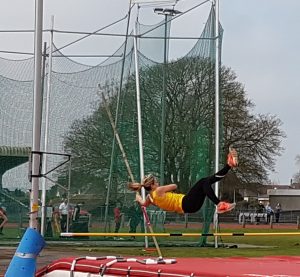 Men’s Pole Vault saw a fantastic win by James Lelliott with 2.70m SB and a close 2nd place PB for new comer Steve Cox with 2.10m. Steve jumped the same height as the B string winner but only evaded top spot due to a missed attempt, well done to Steve! Steve also took his hand to the Discus (non-scoring) although he almost didn’t make it to the circle. The officials tried to stop him crossing the track to join the other throwers despite his efforts to convince them he was there to compete. Perhaps they weren’t expecting a slim, long distance runner to rock up to throw things?

400mH: Steve Cox also nailed the 400H for the first time and brought in the points as the only representative in this event and every point counts in these matches. Steve slotted into the BAC team very well. He’s been bitten by the BAC track & field bug and is enthusiastic about improving his performance and competing at the next SAL match at KP in May.   We look forward to welcoming our women’s hurdler/sprinters, Danielle Marshall and Janet Dickinson back for the next match. Janet was busy officiating and helping the day run smoothly. 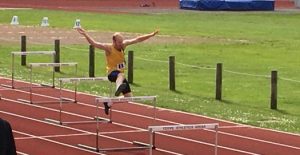 Middle Distance:
Next up, the middle distance runners took to the track. The events were covered by Nikki Sandell, Harriet Slade and Joy Wright.

Nikki Harriet going for the win in the 3000m 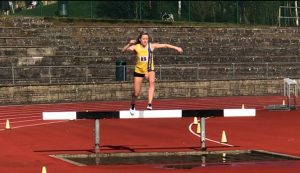 Harriet at the water station, thirsty anyone?

5000m Men
Top points were up for grabs in the men’s 5000m and BAC snatched them with impressive 1st place performances in both A & B string. Ultra-runner, Steven Way clinched it with a convincing win in 15:39.21, making him the fastest athlete for his age group in GB this year! 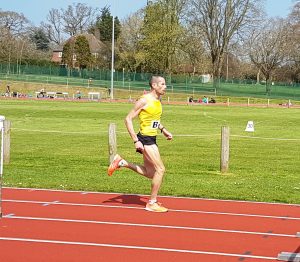 Steve Way out on his own pushing hard over 5k. 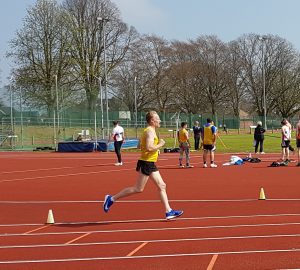 Roy Long, is strong in the 5k

Men’s 800m: Back to the 800m with the men’s performance. This included a great race execution by Lewis Sainval (U20) 2:02.15 and Lewis Bartlett, 2:14.27 PB both bringing in the points for 3rd place. It certainly made it easier for the supporters to cheer them on at the same time by continually shouting “Come on Lewis!”, although there was a third Lewis in the race from Portsmouth, who undoubtedly benefited. Welcome to Lewis Bartlett, a newer member to the BAC team, already showing great potential.

Women’s 400m:
Joy also competed in the 400m, 62.03 SB to come 4th in the A string against a field of U23s. After the 800m and especially the rest of the day’s events, Joy was relieved her body held together considering her constant battle with injuries in the lead up to the outdoor season.  Women’s Team Leader, Jemma Bates also came 4th place in 80.10 against all U17s to gain valuable points for the team. 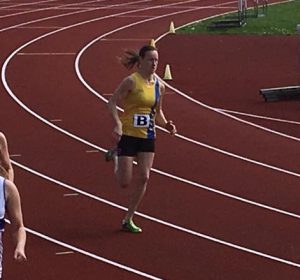 Men’s 400m: Adam Nicholass and Andrew Sheerin showed great commitment to the team by securing valuable points in the men’s 400m. Adam didn’t stop there and pulled in more wonderful points for 3rd in the 1500m and 2nd place over 2000m Steeplechase. A commendable effort by a sprinter! 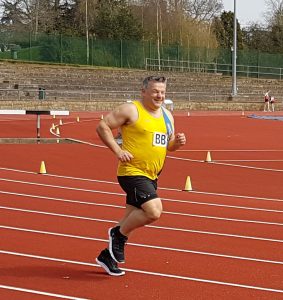 Andrew concentrates his efforts on the throwing events and another one of the many dedicated athletes willing to fill in the gaps to cover the events. 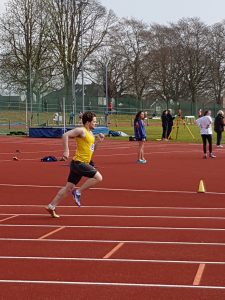 James Lelliott and Joe Hayward’s sterling effort over the 110mH (very high hurdles) welcomed many a cheer from an encouraging crowd. Fortunately neither athlete sustained an injury in their pursuits to cross the line and they were rewarded with a 3rd and 1st place to add to the team points tally. Our very own Janet Dickinson has also perfected the art of lifting, moving and shifting the hurdles. Her help, alongside our other officials and helpers was appreciated by athlete’s and organisers alike. 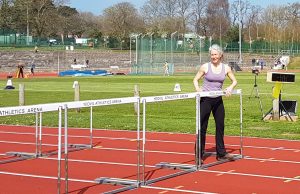 Janet gets a work out lifting hurdles. Surely not higher?

High Jump:
Jazmin Cooke’s (U17) high jump performance 1.45m, secured 2nd place (A string) in a strong field and only 8cm below the winner.  Sian Meadows (U17) also came up with the goods, jumping of 1.40m, 2nd place (B). Our young athletes are jumping to win and it’s exciting to see such great talent coming through the ranks and stepping up to senior competition.

James Lelliott excelled to 1.78m for 2nd (A string) in a highly competitive field. Sam Adams made his debut appearance for BAC in the high jump with an outstanding 2nd place in 1.50m which is close to his PB and a great start to the season. We hope to see more from Sam as he continues to improve throughout the season. 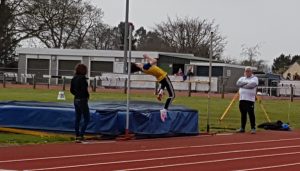 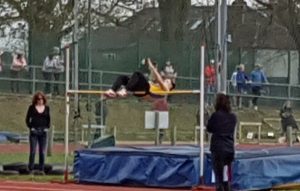 Long Jump:
It was great to Amelia Dobson back from injury and jumping 5.18m for 3rd place with Angela Spall performing well with 4.19m, 3rd (B).

James Lelliott’s jumping continued to impress with a convincing 6.99m win in the long jump. James is ranked 5th in GB and the current British Indoor bronze medallist, behind the former Olympic champion, Greg Rutherford with a PB of 7.65m. Joe Hayward (U17) showed great promise with a 5.69m and excellent 2nd place spot. This is another event that shows the calibre of athletes training with and competing for BAC.

The relays are the final events of the day and could be considered one of many highlights. They are cheered on by the whole team in anticipation of bringing that baton home as fast as possible. 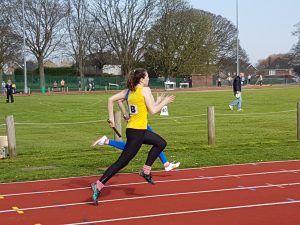 First up was the women’s 4x100m relay with an impressive 2nd place in close race to the line in 52.04, less than a second behind match winners Yeovil. A courageous effort by our youngest athletes, showing great dedication and talent.  The team included: 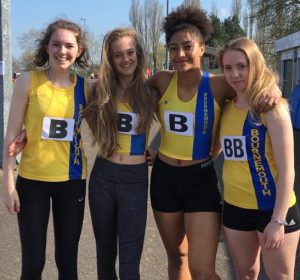 4x100m Men
Next the men showed great form in a close battle for 2nd. They came 3rd in 45.16, less than half a second behind Yeovil. 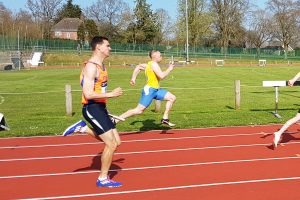 BAC relay teams were boosted by a combination of throwers & middle distant runners, even Harriet lined up straight from the steeple to take the baton for the 1st leg.

The young athletes showed impressive character. They competed against older athletes but ran hard and smashed it. They should all be very proud. The future is bright!

Vikki in the Long Jump 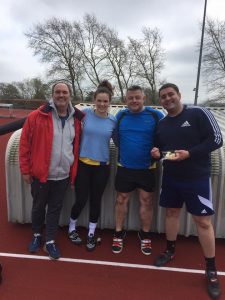 “Efforts today by club members were special in my opinion.
Seeing a full coach of enthusiastic members going to a SAL match has seldom been matched in my 53 years at the club.
Well done everyone.”
Coach Paul Rees

Thank you BAC!
A huge thank you to all who attended and to all the officials and helpers that made the day possible. In particular Officials, Juliet Dobson, Janet Dickinson, Hazel Bates, Wynne, Robin and helpers, Paula Broome, Susie Shepherd and Paul Dowson. Not forgetting a big shout out the both team managers Jemma Bates and Andrew Sheerin. Andrew and Jemma work extremely hard to organise and manage the teams to go and represent our club too the highest standard. Their zest and enthusiasm will continue to spread throughout the season and we look forward to the next match on 20th May. 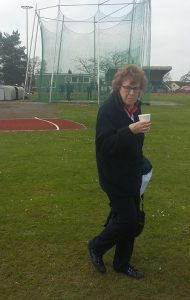 Wynne grabs a much needed cuppa to go!

There are 16 clubs in Division 2, West and BAC are currently 7th place in the league table after match 1. This is just 36 points behind top spot and we can continue to improve with the same dedication and commitment displayed in Yeovil.

BAC is a diverse and wide ranging club with plenty of young new talent moving up through the ranks, some long standing and well established athletes and numerous Masters (35+). No matter what age or level, come and join us on the track for training and at SAL days which are outstanding for competition, enthusiasm and extraordinary team spirit so get your trainers or spikes on and join us!