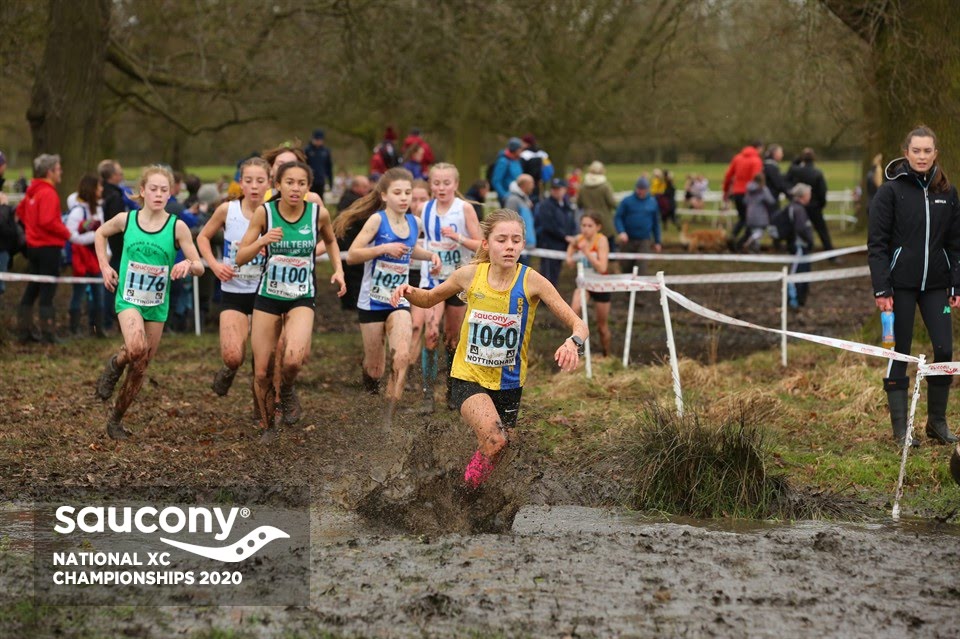 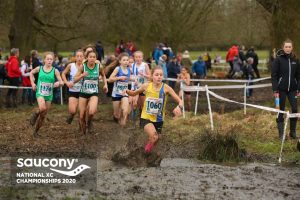 Following all the storms that had battered the UK from pillar to post and the persistent rainfall that followed for weeks on end, when the day of the National Cross Country Championships came round it was inevitable the participants would have some testing conditions to deal with.

The venue for this year’s event was Wollaton Park in Nottingham and unsurprisingly it turned out to be one of the muddiest Nationals on record. As if that wasn’t hard enough, the high winds on the day made it even challenging for those who took part. It was certainly a stark contrast to the idyllic weather they had in Leeds last year.

Of course, being in Nottingham, it wasn’t the easiest place to get to for those living in Bournemouth so only a few Bournemouth AC members made the trip up. They were Annette Lewis, who was competing in the Senior Women‘s race and Erin Wells and Mariah Marshall who were both in action in the Under 13 Girls race.

With it being the National Cross Country Championships, as one would expect, the level of competition was extremely high and the event still remains a popular attraction for the nation’s elite cross country runners of all age groups.

That meant that the BAC representatives would surely have to be on top of the their game to avoid finding themselves battling towards the back end of the field.

Erin Wells had absolutely no intention of letting that happen though and she certainly possessed the talent to be fighting for positions much further up the standings.

It’s been a tremendous season for Erin on the cross country circuit. She finished sixth in the Under 13 Girls Individual Aggregrates in the Hampshire Cross Country League which, considering the standard of opposition, was a terrific result.

At the conclusion of the Wessex League Cross Country season Erin finished in second place in the aggregate standings for the Under 13 Girls which was again, a very impressive performance.

This was the Nationals though and there would be an inevitable step up in class in comparison to those other events that she’d had so much success in.

As for Mariah Marshall, she’d had a pretty good season as well on the cross country circuit. She finished in 18th place on aggregate in the Wessex League and was 71st at the South West Inter County Championships.

She also registered 40th place in the Hampshire County Championships and 72nd in the Dorset County Schools’ Championships.

Again though, competing at the Nationals would be a higher level of competition for her though so it was going to be interesting to see how she coped in that situation.

The course Erin and Mariah had to face was 3.7 kilometres in length and including some almost swamp like muddy water sections that they had to splash through, as well as plenty of extremely difficult sections of mud. 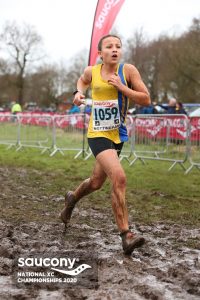 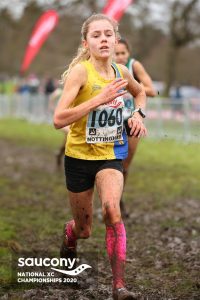 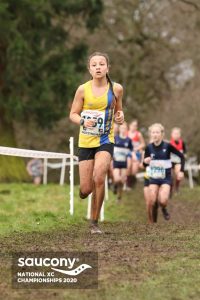 Mariah gives her all as she progresses through the 3.7km course 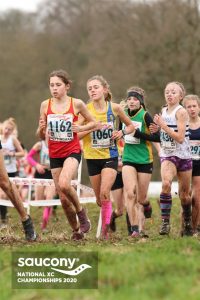 Erin jostles for position with some top level opposition 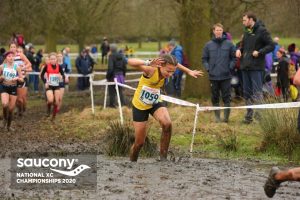 As she has done throughout all her cross country races this season though, Erin ran well and put in a performance to be proud of. Completing the course in a time of 16:28, she was 27th fastest on the day, which was a fantastic result, out of 358 finishers.

Coming in in 314th place, Mariah crossed the line in a time of 20:58. That was a decent run from Mariah and considering the standard of opposition she was up against, it was a very good effort. 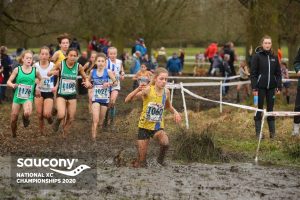 Erin remains focused and strong despite the challenging conditions 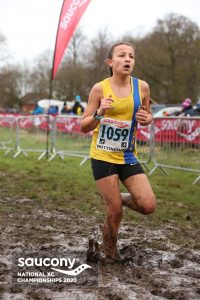 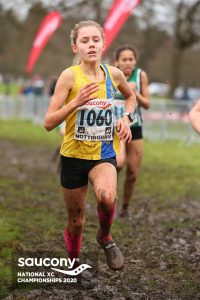 Erin had an amazing run, finishing 27th out of 358 in the Under 13 Girls race 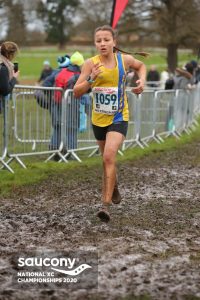 Mariah took a creditable 314th place clocking a time of 20:58

Of course, flying the flag for Bournemouth AC in the Senior Women’s race it was Annette Lewis. Annette loves her cross countries and barely misses any of the big races. She came 77th overall in the aggregate standings in the Hampshire League after completing four out of the five fixtures for the season.

She came 84th in the South West Inter Counties Championships at Yeovil and was 18th in the age category. She was also the Southern Cross Country Champs as well where she finished 650th in an extremly high standard field.

The course for the Senior Women‘s race at the Nationals was 9 kilometres long and again, Annette had to tackle the waterlogged, swampy sections as well as the deep, thick muddy stretches. There were even some huge logs from fallen trees strewn across the pathway that she had to negotiate.

Annette loves all that though. It’s all part of the fun and she never shirks a challenging course or high quality opposition. She just goes out there and gives her all. 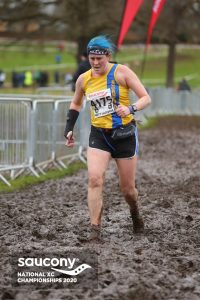 Annette Lewis was competing in the Senior Women’s race 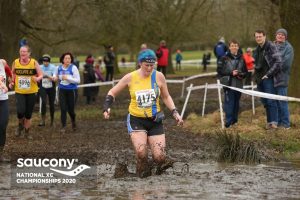 Needless to say, Annette did of course manage to successfully negotiate the course, despite all the hurdles put in front of her and crossed the line in a time of 1:08:09. That put her in 880th place in the standings.

As well as the usual difficulties that all runners are faced with on tough cross country courses like this, Annette also suffers from asthma, which makes it even harder for her. 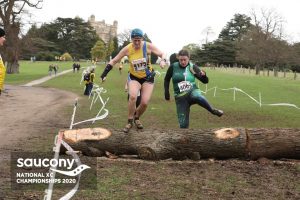 Whenever she finishes a race, the first thing she does is reach for her inhaler and only then does she have the chance to catch her breath again and recuperate.

For her, it is not just a race against her fellow competitors, it is also very much a personal battle against asthma, which she endeavours to win every time.