The return of the popular Guernsey Easter Running Festival, after a two-year absence due to the pandemic, saw club veterans Ian Graham and Dave Parsons jump at the chance to get their fix. That meat attempting to tackle the four races in four days which is the feature of this event.

Dave had participated in the Guernsey Easter Running Festival for 21 consecutive years prior to the pandemic and for Ian this would be his 13th occasion. They were joined, as usual, by Poole Runners man Geoff Scott, who was attempting to complete his 25th Guernsey Easter Festival and, if successful, would complete 100 Easter Races on the Island.

As ever, Ian was downplaying his chances of featuring in the ‘Supervet’ category (all over 60s) in which athletes are ranked according to their age related performances, although he had been showing some good form in parkruns and the Marnhull 12k. In view of a number of health issues over the last year or so, Dave was just going to see how it went, although he did hope to manage all four races. Geoff was very much fixed on his potential century of races.

The weather forecast was very good so it was something of a surprise to find, on waking on Good Friday morning, that it was foggy and cool for the 5k. There was a new course for the Festival this year, however, they had already run on the course last August when they travelled to Guernsey to take part in the West Coast 5k on this same course. Then, there was a brisk headwind which hindered times but this time the conditions were more favourable with just a light wind.

Ian quickly settled into his rhythm and completed the point to point course in an excellent time of 24:29 to finish 103rd out of the 155 finishers, and quite rightly was very happy with that. Dave and Geoff both set off at a pace with which they were comfortable and were equally delighted with their finishing times of 27:29 (117th) and 28:50 (131st) as they were both about 3 minutes quicker than their recent parkrun times. In the ‘Supervet’ category, Ian (75.36%) was first male with Geoff (66.11%) 9th and Dave (65.19%) 10th. Ian’s performance ensured at least one prize to be collected at the end of the weekend!! 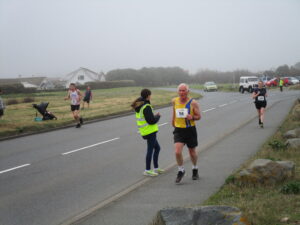 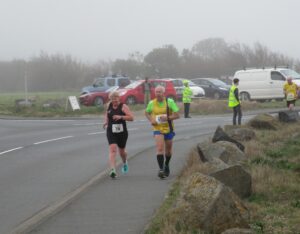 Dave Parsons nears the completion of his 5k effort

Saturday proved to be the hottest day of the weekend for racing and the race was the traditional ‘Full Course’ 4.75 mile Keith Falla Memorial cross country event. Numbers were a little down on previous years with just 88 completing the course. Ian ran a very strong race to finish in 64th place in 41:20 (73.55% – 3rd male). Dave really struggled, possibly due to the heat and had to stop twice quite early on. However, he managed to recover and finish quite strongly in 49:00 (80th 60.24%), with Geoff a little further back in 50:57 (83rd 61.83%). 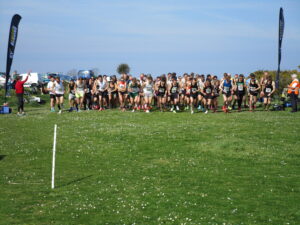 The start of the ‘Full Course’ race 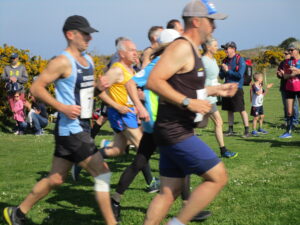 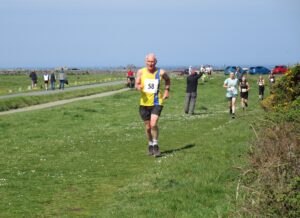 Ian storms toward the finish in the ‘Full Course’ race

Easter Sunday was again warm, although thankfully not as hot as the day before. This year the 4 x 1 mile cross country relay event was at the new venue of Delancey Park. The course, whilst excellent for spectators, was quite demanding with lots of sharp turns and some challenging short hills, although at least it was dry!  Our intrepid three were joined again (as in 2019) by Lisa Evans, a lovely Welsh lady who lives in Guernsey, hence the team name of ‘The Dragon and the Jurassics’! 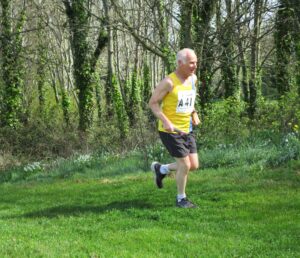 This time, there were a lot of young teams competing which was really good to see. It was always going to be a challenge for a team of such mature years to compete over such a short distance and so it proved. Ian was told to go out on first leg and get a lead the rest could hold onto. He couldn’t quite manage it, but still ran a very creditable time of 8:41. 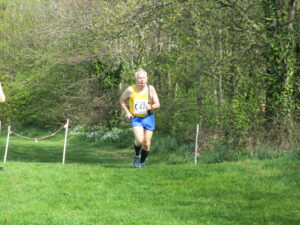 Lisa took over (carrying the ‘chipped’ baton) and managed another good time of 9:33. Dave sped off on his leg but that enthusiasm didn’t last long and he really struggled on the course finishing in 10:16. Then it was over to Geoff for the final ‘glory’ leg. As several teams had already finished, the glory wasn’t to be but he still battled round in 10:31 for 39th team. 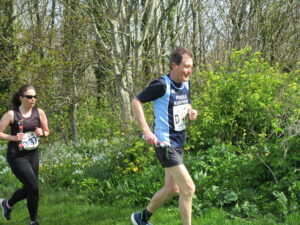 That was three down and one to go! However, for once in his life, Dave decided that he needed to listen to his body and that enough was enough for this weekend. He concluded that the 10k on Easter Monday would be too much, so would make do with the role of spectator.

The 10k is another point to point race and this year conditions, although warm, weren’t too bad with a bit of a tailwind for part of the course. Ian was again the star of the group with a well run race finishing 68th (99 finished) in 51:58. After a while Geoff came into view and to great applause came home in 63:31 (83rd) to complete his 100th Guernsey Easter Run. An amazing achievement indeed! 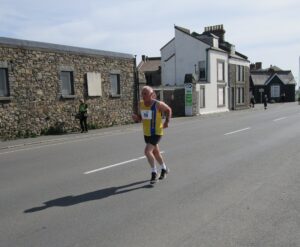 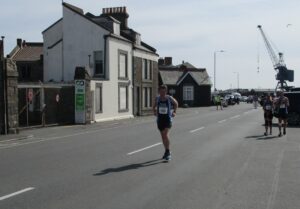 At the time of writing, neither the 10k age category performances nor the overall individual results had been published. What mattered though was that all three performed well and it was great that the festival was back. Despite the numbers being a little down on previous years, the organisers were pleased and are hopeful that it will grow again over the next few years. The three musketeers hope to be back in 2023 for another go.

Postscript – since their return to the mainland, two important things have happened. Firstly, Ian has moved up an age category having celebrated his 75th birthday and secondly, he has also completed his 100th parkrun at Bournemouth on Saturday 30th April. Geoff and Dave joined in the celebrations and also ran, before tea and cakes afterwards.