BAC winners in Maidenhead HM, The Beast and Parkruns 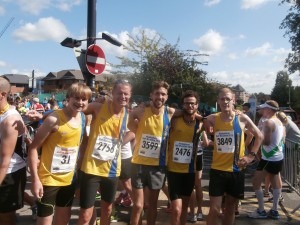 On the same day, a number of BAC athletes were competing in The Beast, starting and finishing in Corfe, over a demanding off-road course through the beautiful Purbecks, also taking place in ideal conditions.  Ross Smith was the first of the BAC squad to finish, 12th of the total of 362, in 1.31.28.  Ross is hoping to compete in the European Duathlon Championships in Spain on 10 October, so it appears that preparations are going well.  The Ladies’ race was won by Heidi Tregenza, who was 28th overall in 1.36.10.  Heidi just managed to hold off Nick Kenchington, who was 31st in 1.37.43, and third Lady was Nikki Sandell, who was first V35 Lady, and 57th overall in 1.44.57.

Of the 388 who completed the Bournemouth Parkrun in Kings Park on 5 September, no fewer than 11 were BAC athletes.  Damian Boyle was leader of the pack, finishing 5th, followed by Paul Dixon-Box (9th), Duncan Wells (12th), Paul Consani (16th), Ian White (21st), Steve Cox (26th), Jud Kirk (29th), Joe Price (56th), Dave Parsons (61st and first V65), Katrina White (115th) and Sam Laws (241st).  The week before, 29 August, there was also a strong BAC representation in the Bournemouth Parkrun, with Paul Dixon-Box finishing second, and Ross Smith 4th.  Paul Consani and Duncan Wells were 6th and 11th respectively, with Ian White, Steve Cox and Sam Laws completing the BAC contingent.  Meanwhile in Poole Park, Steve Way was the winner of the Poole Parkrun on 5 September.  In less than a week, Steve will be competing in the World 100k Championships (Winschoten, Netherlands on September 12th), and everyone at BAC wishes Steve every success, and, to the extent that luck is required, all the luck going.  We will be amongst many following Steve‘s progress with great interest.  Of the 634 who completed at Poole on 5 September, the only other BAC athlete was Ali Carter, who had a remarkable run to finish 4th overall and, of course, first in his age category, JM 15-17.  The week before, 29 August, Graeme Miller was the only BAC representative at Poole finishing 8th of a field of 667.   At the Weymouth Parkrun on 29 August, Simon Munro was 2nd (of 259), and Andy Gillespie continues his regular appearances at the Salisbury Parkrun, finishing 17th of 164 on 29 August, and 27th of 188 on 5 September.