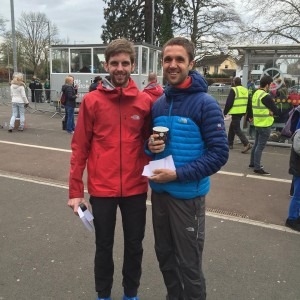 Toby Chapman and Jez Bragg, 1st and 2nd in the Taunton Marathon

Congratulations to Toby Chapman and Jez Bragg, first and second in the Taunton Marathon and Josh Cole, marking a welcome return to competition by winning the Bournemouth Bay Run Half Marathon.  BAC was also represented at the weekend in the Paris Marathon and in the 10k element of the Bay Run, plus Dave Parsons contributes a full account of the Easter Running Festival in Guernsey.

The annual Bournemouth Bay Run took place in ideal conditions, also on 3 April, with approaching 3,000 runners participating in 1k, 5k, 10k and Half Marathon races, the 1k and 5k races being untimed ‘fun’ runs.  The event produced a tremendous atmosphere and activity, particularly around the Bournemouth pier area, and all the races went according to plan, with the results of the 10k and HM appearing very quickly.  Well done to Josh Cole, who has been suffering from injury, on winning the Half Marathon in a time of 1.14.53.  Of the 982 finishers, Ross Blakemore was 46th in 1.29.39, and second lady overall was Gemma Bragg, 53rd in 1.30.43.  Amongst  the 1,000+ who completed the 10k race, four were BAC athletes, Chris O’Brien, 18th in 40.10, Simon Hearn, 21st in 40.28, Yvonne Tibble, 41st in 43.48 and 1st V55, and Louise Price, 107th in 48.22.  Unfortunately, the results don’t mention the clubs of most of the competitors, so apologies if there are any omissions.

Ian Graham and Dave Parsons made their annual ‘pilgrimage’ to Guernsey for the Guernsey Athletic Club’s 35th Annual Easter Running Festival. This was Dave’s 18th successive year and Ian has now been for the last 10 years which makes them very much ‘stalwarts’ of the festival. However, this year the format had been changed and there was a new ‘slimmer’ look to the event which started with a 5k road race (previously 10k) and finished with a 10k road race instead of the usual Half Marathon. The only event which was unchanged was the Saturday ‘Full Course’ Cross-Country which is held over the traditional course and doubles as the Keith Falla Memorial Race. The cross-country relay was due to be held over a shorter course on the neighbouring island of Herm, subject to weather conditions but more of that later.

Good Friday dawned with what was to prove to be the best weather of the weekend and Ian and Dave arrived at the Athletics Stadium at Footes Lane in beautiful sunny conditions and even the wind was lighter than usual for Guernsey. It proved to be an excellent venue for this new 5k event. Everyone was able to watch the children’s races which started and finished on the track. The main race started just behind the main stand and was on a fairly flat course with much of it on quiet country lanes. The runners then returned to enter the stadium and run the last 300 metres on the track finishing in front of the main stand, making it an excellent spectator event. 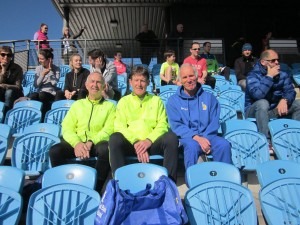 Dave, Geoff Scott (Poole Runners) and Ian relaxing in the sun prior to the 5k

Ian had a good solid run finishing in 80th place (187 finishers) in 21:54 just ahead of a fast finishing V60 from Saint Edmund Pacers although he was unaware that he was being closed down. Dave was on the track at the same time and finished 88th in 22:37, being overtaken on the line by a ‘local’ V60 runner again being unaware that he was being caught! The age categories in the series are in 10 year groups and they initially thought they were 1st and 4th V60 but when the results were published, were surprised to find 3 other V60s in front of them (2 of them under 20 minutes!!). 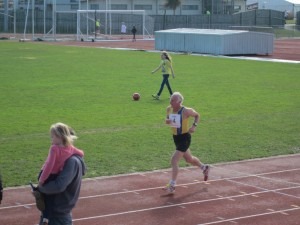 Ian powering home in the 5k 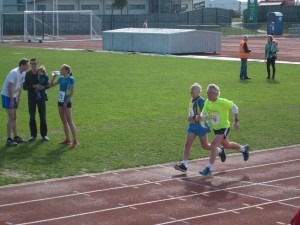 Dave getting caught on the line at the finish

Next came Easter Saturday and the Keith Falla Memorial Cross Country event on L’Ancresse Common and the winds had returned as Storm Katie was approaching. Whilst warming up it was apparent that although the underfoot conditions were good, possibly the best we had ever encountered, the wind really was extremely strong and would be against us on the long run in. Ian set off with some determination and although briefly overtaken on the ‘way out’, by the St Edmund runner, soon went back past him and gradually pulled away from him. In so doing he caught and overtook the V60 winner of the 5k and came home 50th (110 finishers) in a highly respectable 36:16 exactly one minute behind the first V60. Dave had a reasonable run despite the tough finishing conditions and was 61st in 38:16 and had moved up to 5th V60 for this race. 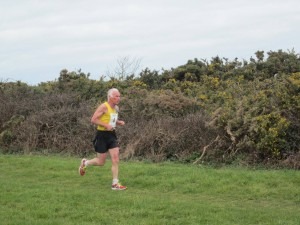 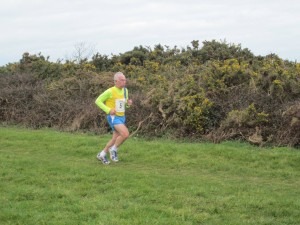 Dave ‘blowing in the wind’ at the finish

Probably the best news of the day was hearing that due to the adverse weather conditions forecast for the Sunday, the Cross Country Relay could not be held on Herm so instead of having to be in St Peter Port to catch the 8.30am ferry, the relay would be held on part of the Stonecrusher Course about 2 miles from our hotel at 11.00. Bearing in mind the clocks were going forward on the Saturday night, this really was welcome news.

Easter Day arrived and the weather was sunny but deceptively cold with a bitter wind sweeping across the start and finish area for the Relays. This year the decision had been taken that the Relay result would not form part of the overall competition which was great news for Dave who has always found this event to be about 10 miles too short. In 2015, Geoff hadn’t gone to Guernsey as he was too busy walking the whole of the South West Coast Path (any excuse!) and our team was (wittily?) named ‘Scott Free’. With Geoff now back in the team we came up with the highly clever title of ‘No longer Scott Free’ and we enlisted as our 4th team member, Angela Jones (4th in last year’s World Masters Mountain Running Championships). Our race order was decided with Angela on 1st leg followed by Ian, Geoff and Dave. We walked around the course beforehand which was effectively the first half of the previous course used and so was even shorter than usual and had been ‘estimated’ at 1.25 miles so no time for warming into the run then! 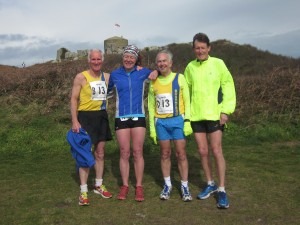 Ian, Angela, Dave and Geoff – AKA – No Longer Scott Free after the race

Putting Angela first was a good move in that she ran a ‘stormer’ to finish with 7:47. Unfortunately, that put us in 12th place out of the 28 teams and there was really only one way to go after that. Ian, (was he saving something for the final race?) was next to go and lost just one place with a 9:12 clocking. Geoff’s battling run of 10:21 dropped us to 17th leaving Dave with the ‘glory’ leg. He decided to give it a go and shot off determined not to get caught by local V60 JP Mace who always seems to be on the same leg as Dave and invariably goes by him at some point. This time it would be different, Dave thought and coming to the final short climb just before the finish, all was going well. Then suddenly there was JP, powering past him just before the drop down to the finish. The effort was worth it though as despite dropping two places for the team to finish 19th, Dave clocked 9:01. When the individual times were posted Dave & Ian had finished 73rd and 75th out of 112 and 4th and 5th V60 respectively. 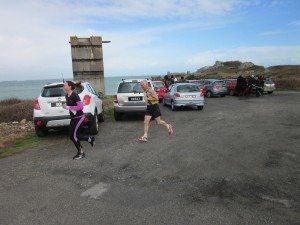 Ian ‘flying’ past the Stonecrusher 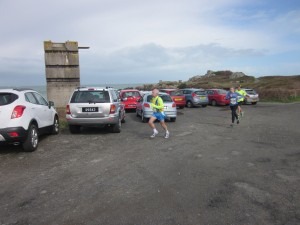 And so the final race on Easter Monday – the 10k road race. The start and finish were on the seafront at St Peter Port as per the Half Marathon in previous years and ‘basically’ followed the old Half Marathon route out to St Sampsons and then off onto a short private road, around a bollard and back. The remnants of Storm Katie were still evident, so yet again, the runners would be faced with a fierce headwind on the return to St Peter Port.

Ian set off in determined fashion and although confessing afterwards that he was surprised to see Dave so close behind him at the turn, he made a much better job of the return into the wind. He tucked in with a group until just before the finish and came home in 52nd place (146 finishers) in 45:32 and was very frustrated to find that just one place and 7 seconds in front of him was the first V60! Dave hung on to finish in 48:20 in 66th place and 4th V60. 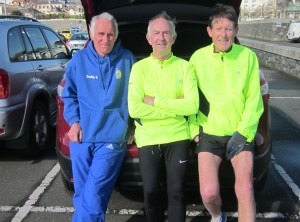 Ian, Dave and Geoff relaxing (exhausted?) after the race

All in all another terrific weekend and, for us, the new format seemed to be a success. It was good to meet up with old friends again and we look forward to returning to Guernsey again in 2017. Anyone else fancy the challenge?

Toby Chapman and Jez Bragg, 1st and 2nd in the Taunton Marathon