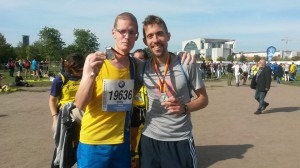 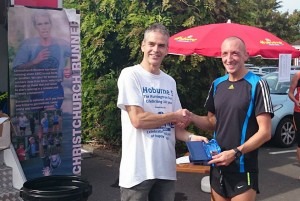 Graeme Miller receives his awards won in the Hoburne 5

On the same day, over a shorter distance and more low-key, but just as important to its participants, was the Hoburne 5 (mile).  The results aren’t yet available on their website, nor on Power of 10 (no criticism – early days!), but we know that, following a fine run,  Graeme Miller was 2nd overall, and winning veteran, and the photo shows Graeme receiving his awards from Peter Wallis, of Christchurch Runners, who took over the organisation of the race this year.  When the results are available, this posting will be updated if there were any other BAC competitors. 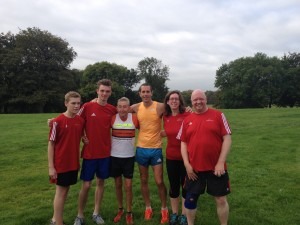 The day before, Saturday 27 September, there were winners in the Poole and Bournemouth Parkruns, and also further afield in Heaton Park, Manchester.  Jacek Cieluszecki was the outright winner of 518 winners in Poole Park, with Simon Way 10th.  In Kings Park, Bournemouth, the first BAC athlete to finish was Ross Smith, 6th, followed very shortly afterwards by Nikki Sandell, who was the 1st lady.  Also running were Joe Price, Duncan Wells (and dog – thought to be Duncan‘s dog’s PB!), Sebastian Hearn (5th in his age group), Paul Hill (for some reason a long way down the field for a winner of this event!), Janet Dickinson, Paula and Jud Kirk.  The Bournemouth Parkrun now routinely attracts over 200 competitors, but nearly 300 (to be exact 291) ran on 27 September.  Meanwhile, in Heaton Park,  Manchester, none other than Steve Way was the winner of the Heaton Parkrun, the first of 424 runners, amongst whom were ex-BAC members John Broom (4th – first Parkrun) and Dawn Broom (3rd lady).  Also spotted in the results was one Ron Hill!  Steve achieved yet another landmark, in that this was his 50th Parkrun – congratulations!