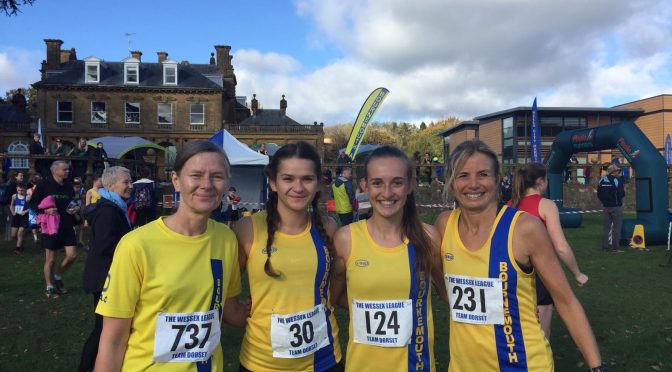 Most people will remember Saturday 2nd November. It was the day of the Rugby World Cup final which dawned with high hopes of an England success over South Africa. It was also a day of torrential rain and high winds which resulted in the abandonment of just about every parkrun in the area.

Would the Wessex Cross Country League race go ahead the next day? Well, fortunately, Sunday 3rd November turned out to be a bright sunny day which was ideal for cross country running with plenty of mud, even on a course which consisted mainly of zigzagging up and down a field. It was a course imaginatively worked out and organised by Poole Runners to take place within the confines of the tight area available.

Bournemouth AC‘s youngsters were present in strength, with some excellent results. In the U11 category the BAC stars were William Launder for the boys and Isabel Cherrett and Esmee Hunt Altkins for the girls. William is now 3rd aggregate U11 boy for the season so far, and Isabel and Esmee are 1st and 2nd U11 girls so very well done to them! BAC’s U11 girls’ team now lie 2nd in the aggregate team table.

It is a similar story in the U13 category. Oscar Ewen Matthews was the 2nd U13 boy and occupies 2nd position for the season so far, with the BAC U13 boys’ team leading the competition so far. Such is the depth of BAC’s U13 boys’ involvement that there is also a BAC ‘B’ team in the table.

Erin Wells and Darcy Hawkins were BAC’s U13 girl stars, finishing 3rd and 4th respectively, with the team lying 3rd in the competition, and Erin is 3rd individual U13 girl so far. With our U11 and U13 athletes running so well, together with the depth there now appears to be, there is surely a bright future for BAC’s cross country running.

At the U15 level, many congratulations to Neve East, who won the U15 girls’ race, closely followed by Martha Preece who was an impressive 3rd. Neve, having competed in both fixtures so far, is the leading U15 girl. Anya Sandell, Ruby Bowden and Laura Reeves all ensured BAC has an U17 ladies’ team in the league, which is 3rd on aggregate thus far.

BAC’s teams are also doing well at the senior level. Richard Brawn, who was the first senior man to cross the line at Lytchett (he allowed a couple of U20 men to precede him!), is now the leading senior man for the season so far, and helped by Jonathan Matthews, who was 9th at Lytchett, BAC’s senior mens’ team is now 2nd overall.

Not to be outdone, the BAC’s ladies’ team is now 1st! Holly Collier won the ladies’ race at Lytchett, with Lisa Elmore coming in 3rd. Having competed in both fixtures, Lisa is 2nd lady in the aggregate table for the season so far. Well done to all the 35 BAC athletes who competed at Lytchett. The next fixture is on 15th December at Canford School. Please see below for the full BAC results.

BAC’s senior mens’ team in the Hampshire Cross Country League are keeping the club flying in Division 1 – but only just. The new course at Sparshalt College, set up by Winchester & District Athletic Club, proved to be a genuine cross country course, with plenty of mud, glorious mud, some hills just when you didn’t want them, countryside, and just two long laps. Most people, as they left, expressed the hope that this could become a permanent course.

BAC’s senior mens’ team finished in 7th position (of 10) in Division 1, with 283 points. But the warning signs are there. The top team in Division 2 scored just 2 more points, and the top two teams in Division 3 would now be above BAC were they in Division 1, scoring 156 and 284 points respectively. So we cannot afford to relax! BAC still has a veteran mens’ team in the competition, at present lying 17th of 24 teams.

Particular mention must be made of Henry Bramwell-Reeks who, having competed in both Hampshire Cross Country League fixtures so far, is 8th U20 man so far. BAC’s senior ladies were impressively led home by Holly Collier, with the team 16th of 26 teams. Unfortunately, there has not been a BAC veteran ladies’ team in either fixture so far, so fall out of the competition.

In the younger categories, Jasper Todd was the 6th U17 man, and lies 7th U17 man aggregate for the season so far. Martha Preece featured in the top echelons of the U15 girls’ race as did Erin Wells in the U13 girls’ race and Oscar Ewen Matthews in the U13 boys’ race. Oscar, having competed in both fixtures is 8th U13 boy so far, and it is pleasing to report that BAC has an U13 boys’ team in this league, currently lying 9th (of 14). Well done to all of the 22 BAC athletes who competed at Sparshalt College. Perhaps there will be a few more to the next fixture at Aldershot on 30th November. Please see below for full BAC results.