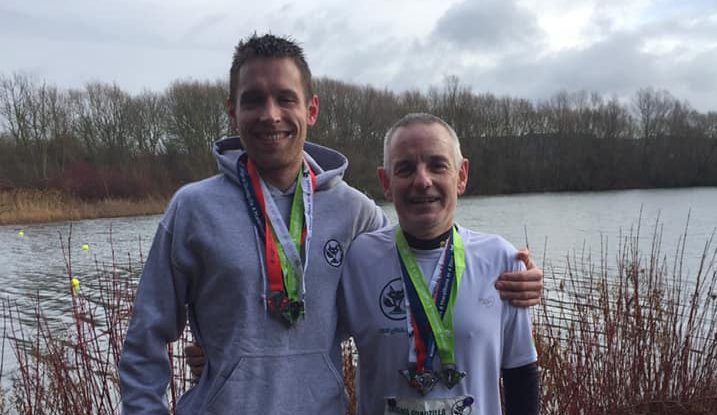 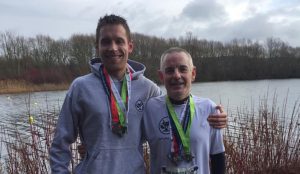 After successfully managing to reach his target milestone of 50 marathons towards the end of last year, Stu Nicholas could have been forgiven for taking it a bit easier in 2019, but then, lets face it, that just simply isn’t in his nature.

This year Stu is planning to conquer even more marathons and take on some even tougher challenges and that intention was signalled resoundingly when he revealed he’d be taking on the Enigma Quadzilla.

The Enigma Quadzilla is an event that is every bit as beastly as it sounds, consisting of four marathons in four consecutive days. And these aren’t just any marathon either.

Each one entails completing of seven-and-a-half laps of Caldecotte Lake in Milton Keynes, thus making it, not just a physical challenge but a mental one as well. The distance of each lap is 3.55 miles, with one additional smaller 1.67 mile loop on each day to make a total distance of 26:52 miles.

The task doesn’t, however, mean the participants will be running four consecutive marathons that are exactly the same. That would just be sheer lunacy.

The Caldecotte Lake course isn’t alien to Stu though. In fact, he kicked off his incredible marathon exploits last year with back-to-back marathon triumphs at the Winter Enigma, both of which were at Caldecotte Lake.

On bonfire night in 2017, he won the Enigma Fireworks Marathon, which was again at Caldecotte Lake and he also claimed victory in one of the “Week at the Knees” marathons there in March.

Having had so many great memories from the venue in the past, Stu had every reason to be confident going into the Quadzilla event but of course, he’d never done four consecutive marathons before, so in that sense, it was new territory for him.

Before setting off for his first marathon out of the four, on Thursday 7th February, Stu had been having doubts about whether he’d be able to complete all four marathons. What he did know though was that, once the hooter sounded and race got underway, he would do everything in his power to achieve that goal.

Planning to start off steadily and not expend too much energy on the first day, Stu had a very smooth start to the proceedings, running well within himself to finish in joint second place with Keith Luxon of Benfleet.

His time for the first marathon was 3:18:40 and, although it was quite a steady run from Stu’s perspective, only one man in the field was able to beat that and that was Paul Davies from Centurion RC who finished in 3:15:59.

On day two the conditions were a lot worse, with a howling wind and persistent rain to contend with, on top of the fatigue from the previous day’s exploits.

It didn’t slow Stu down though and he and his newly formed partner in crime, Keith Luxon cruised in for a joint victory, crossing the line in a time of 3:16:24.

Their closest rival on the day, Louise Parker arrived at the finish almost five minutes later, posting a time of 3:21:12. Then it was the previous day’s winner Paul Davies taking fourth in 3:29:16. That meant Stu and Keith were now in the lead in the Quadzilla standings.

After that his legs were aching a bit so he was fearing that the next day might not be so quick. However, with Keith by his side again for every lap, the pair finished together again in a time of 3:18:47.

This was almost exactly the same time they did the first marathon in so they were maintaining a remarkable consistency despite the obvious fatigue. They finished joint second on day three, with a chap called Bruno Denis securing the win in a time of 3:06:52.

The question now was, could they pull it together for one final time and keep that consistency going on day four? Stu and his new found buddy Keith had agreed to run every lap together and that they stuck to that pledge all the way.

On that morning, Stu’s legs were in bits and first and he was relying on Keith a bit to pull him round. As the race went on though, he gradually began to feel better.

The determined duo had a plan and they stuck to it – and it had worked a treat. They finished marathon four in joint first place with a time of 3:18:13, so again, an almost identical time to what they’d done on the other three days.

It was a truly impressive show of consistency from the two of them – and also discipline as well. To be able to complete all four marathons in the same time, they couldn’t afford to get carried away in any of the races. They had to ensure they kept plenty in reserve for the next day.

Since they’d been to hell and back together, the pair figured it was only fair to share the win for the Quadzilla competition. The fact that they were with each other every step of the way made it an altogether different experience than it would have been if they’d had to do it on their own. It made the laps go a lot quicker and they certainly felt a lot less monotonous. 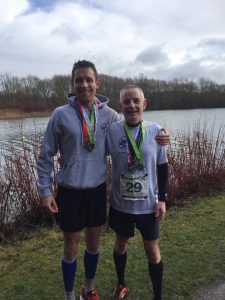 After Paul it was four members of the 100 Marathon Club finishing in 4th, 5th, 6th and 7th, including David Barr, who ran with Keith and Stu for as many of the laps each day as he could before they strode on ahead. Stu will of course be hoping that one day he will join David in the 100 Marathon Club.

In fact a comment from David on Keith’s Facebook post summed it up rather well when he said: “A truly incredible performance. It was a pleasure to watch two great runners own that lake. To do four sub-3:20 marathons in February conditions is astonishing. The quad kings of 2019.” 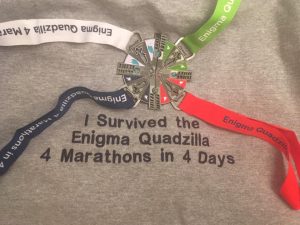 It was the third best Enigma Quadzilla time of the nine years since it’s been going so that was some achievement from Stu in his debut quad and just goes to show how strong he can be in events that require some sort of superhuman level of endurance.

Needless to say, the day after he’d completed the challenge, Stu was hurting all over and his body was certainly letting him know how hard it had worked from the Thursday to the Sunday of that week.

He went in with no illusions that it was going to be easy and no visions of grandeur though. His only target was to finish and he was pleased as punch that he’d managed it. To win the competition was simply the icing on the cake.

And speaking of which, he did in fact come home to a rather delicious looking coffee and stout cake made by his partner Anna and no doubt he enjoyed replenishing all those lost calories when devouring that! 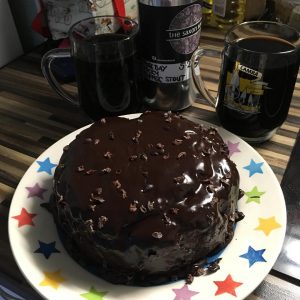