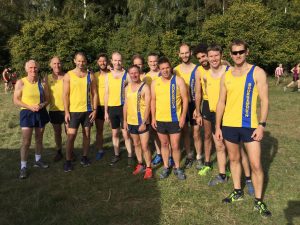 The Hampshire Cross Country League season opened on Saturday 15 October at Farley Mount, Winchester with the largest BAC squad seen at a league fixture for many years – 14 senior/veteran men and 5 veteran women! The only disappointment was the absence of many youngsters, but well done to Anya Sandell, who competed in the U13 Girls’ race, and Tom Farwell, who ran in the U15 Boys’ race, with his younger brother Sam running in the U11 race, organised by the hosting club. Without taking anything away from Josh Cole, Graham Robinson and Anthony Clark, who finished in the top 50 of the Mens’ race, and Marcus O’Toole and Gonzalo Mogorron, who completed the BAC senior mens’ team, and Emma Dews, Nikki Sandell and Joy Wright, who made up the Veteran Ladies’ team which finished 2nd, and everyone else who wore the BAC vest, the star of the day was surely Max Catterall, who cycled from his home to Clapham Junction railway station, boarded the train to Winchester with his bike, and then cycled from Winchester station to the venue. and then, after racing, did the same journey in reverse, by which time it was pouring with rain! BAC‘s men have two objectives this season, firstly to remain in Division 1, and secondly, to finish the season with a Veteran Mens‘ team result, which was achieved last season for the first time in years. On both counts it was a good day at Farley Mount. The senior men finished mid table, well away from the relegation zone, 6th of ten complete teams, with 287 points, comfortably, it was pleasing to note, ahead of the top team of Division 2.  The veteran mens’ team of Nick Kenchington, Jud Kirk and Simon Hearn were 4th in Division 2 (of the Veteran Mens’ competition), of eleven complete teams, an excellent result.  All the ladies competing at Farley Mount were veterans, counting towards both the senior and veteran ladies’ results.  As mentioned earlier, the ladies’ team consisted of Emma, Nikki and Joy, and finished 6th of twenty-one teams, and an incredible 2nd of a total of fifteen veteran teams (the position our veteran ladies were at the end of last season).  It is only a few years ago that, at the most, there would be just one or two ladies competing in this League (and hats off to those ladies), so it is real progress to see, not just a ladies’ team, but an all-important reserve as well should anything go wrong, in this case provided by Caroline Rowley and Sam Laws.  But, all-in-all, it was great to see so many of the blue and yellow vests around the site and in the races.  Results (BAC): Senior/Veteran Men: 32. Josh Cole 35.20;  34. Graham Robinson 35.54;  41. Anthony Clark 36.22;  74. Marcus O’Toole 38.25;  106. Gonzalo Mogorron 40.01;  156. Nick Kenchington 42.34;  163. Richard Brawn 42.52;  168. Jud Kirk 43.03;  176. Simon Hearn 43.20;  204. Simon Hunt 45.00;  205. Steve Cox 45.04;  218. Richard Nelson 46.35;  244. Ian Graham 49.31.  There were 263 finishers.  Senior/Veteran Women: 17. Emma Dews 24.34;  45. Nikki Sandell 27.14;  67. Joy Wright 29.10;  95. Caroline Rowley 31.00;  136. Sam Laws 38.14.  There were 143 finishers.  U15 Boys: 39. Tom Farwell 17.43.  There were 159 finishers.  U13 Girls: 45. Anya Sandell 14.57.  There were 71 finishers.  Sam Farwell competed in the U11 Boys‘ race, which doesn’t form part of the League, the results of which haven’t yet been published. 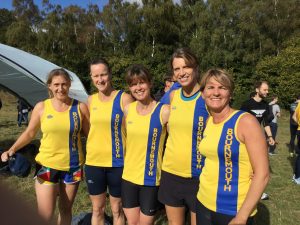 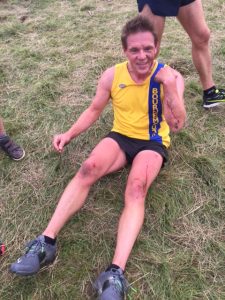 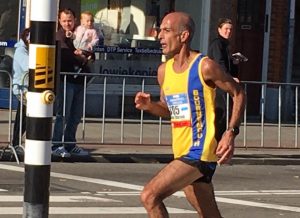 Sanjai Sharma on the streets of Amsterdam

The next day the Amsterdam Marathon was held, with Sanjai Sharma finishing 206th of a total of 12181, with a time of 2.49.40 in the full marathon, and Graeme Miller 122nd of 14832, in 1.24.07 in the half marathon.  Sanjai says: “although this was my second fastest marathon I was disappointed as I was going well till 31k, then there was a recurrence of recent issues.  I recovered around 35k and pushed hard until the finish, and have never felt batter at the end of a marathon!”.  Graeme has been suffering from injury for some time now, so, for Graeme, this was an excellent result. 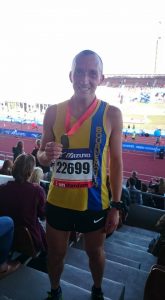 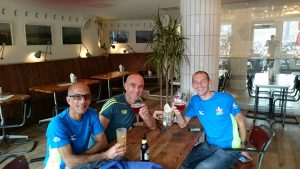 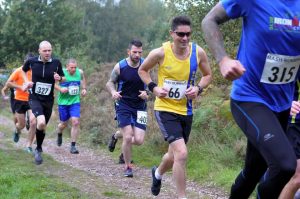 Back to Saturday, 15 October, Chris O’Brien was competing as part of ‘Team Facebug’ in the Milford Mashup 10k, which is a 10k-ish loop around Milford Common and Cannock Chase in Staffordshire, described by Chris as “a lovely race but challenging conditions”.  Chris was 13th of 316 in 44.48. 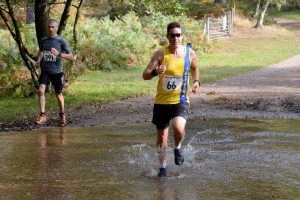 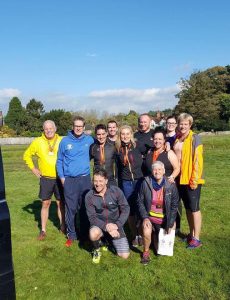 Nearer to home, Two Riversmeet Leisure Centre in Christchurch was organising two races, one a 10k, to launch its ‘Lifestyle Active’ programme.  Billy McGreevy was the winner of 97 competitors in the 10k race. 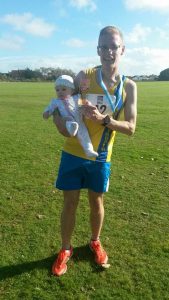 Billy McGreevy with his biggest fan 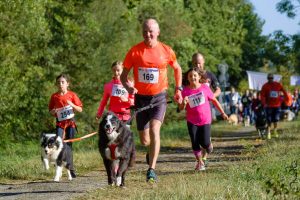 Back to the Hampshire Cross Country League, Farley Mount….. 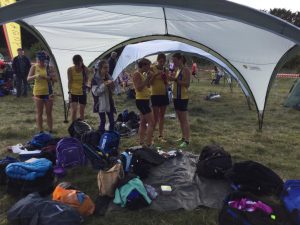 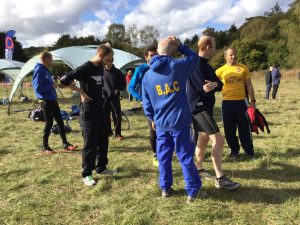 Mens’ Team contemplate their surroundings at Farley Mount, with Max Catterall’s bike in the rear 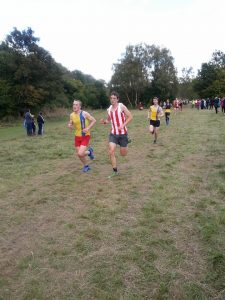 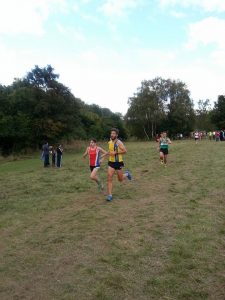 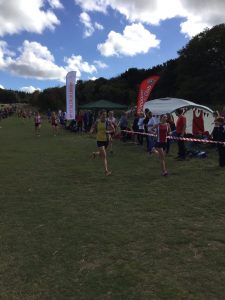 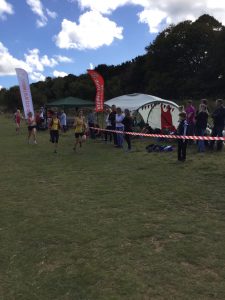 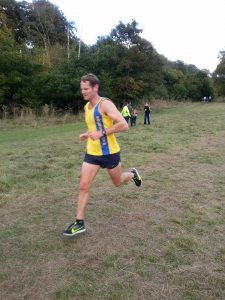 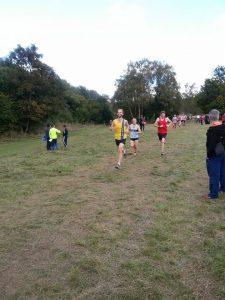 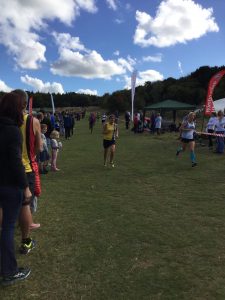 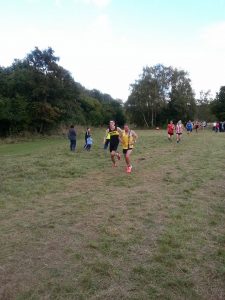 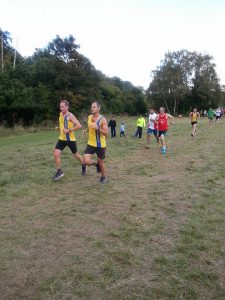 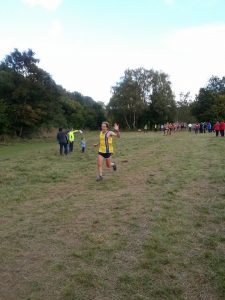 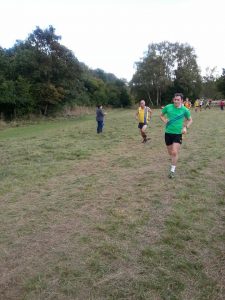 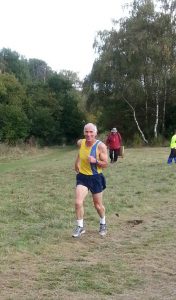 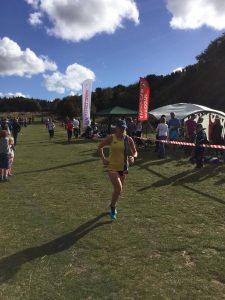 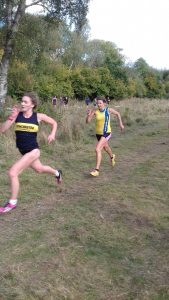 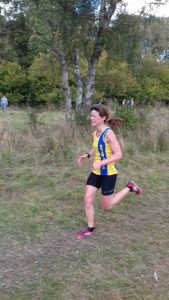 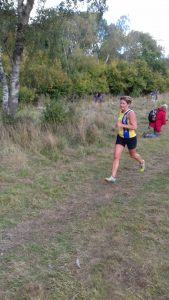