Harry in a hurry at Kempton Park 10k 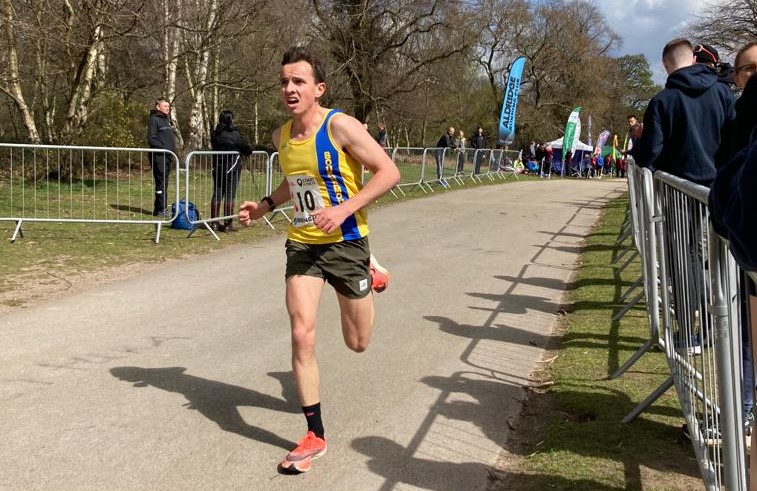 After his blistering time of 31:41 on the track at the Night of the 10,000m PB’s, Harry Smith was out to prove that he could do it on the road as well. That quest took him to the Kempton Park Running Festival where he would feature in a fast, flat 10k race that took in the splendour of the Grandstands and the racecourse.

Kempton Park is of course a famous horse racing track in Sunbury-on-Thames, Surrey, which is actually on the border of Greater London. Usually hosting high profile Jump events in the horse racing calendar, it is a much rarer occurrence to see human runners out there on the circuit. But the Kempton Park Running Festival presents that very opportunity, with a Half Marathon and a Full Marathon also on the agenda, along with the 10k that Harry took part in.

In fact, Heather Khoshnevis did the Marathon race at the event last summer, at a time when races were gradually returning to the calendar as the nation emerged from its covid induced containment.

The way Harry’s been running at the moment he almost resembled a prized, seminal stable thoroughbred with a turn of speed that would make him a bookie’s favourite at virtually any derby.

It was Harry who recorded that incredible 14:48 time at Poole parkrun earlier in the year which turned out to be the fastest parkrun of anyone in the country that day. He then went on to go quicker than that at the AVR Westbury 5k Series where he registered a 14:45 to win at a canter. 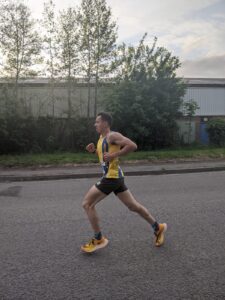 Harry recorded a fantastic PB of 14:45 at the AVR Westbury 5k Series

He also finished first in the biggest parkrun in the country when he clocked a 15:18 at Bushy at the end of April, adding a cherry to the cake of what had been a terrific month of running. That included two fine performances in the Southern and then the National 12-Stage Road Relays and a win in the Salisbury 10 mile race.

Securing a top ten finish in two of the Hampshire Cross Country League fixtures as well, Harry had certainly proved he could mix it with the very best of them in an off-road setting, which is where he feels he excels the most.

The Kempton Park 10k started and finished in front of the racecourse grandstands, providing an electric atmosphere for the runners as they set off and then as they rounded the clubhouse turn and headed into the home straight at the end.

There were also cheer points on the back straight and a DJ pumping out the tunes and geeing up the crowds around the start and finish area. In fact, in many ways it was similar to the Night of the 10,000m PB’s with all the razzmatazz that came with it. The standard though was of course, very different.

In the Kempton Park 10k there was no one else of Harry’s ilk competing. In a way it’s good when that happens, as it means Harry gets a pick up a race win without coming under too much pressure. But from another perspective, it’s not so good, as when you’re looking to record a new PB but you have no other runners around to push you on, it can be hard to keep the intensity.

Starting off with a ferocious 5:01 for his first mile, Harry signalled his intentions loud and clear. He wasn’t hanging around! He then followed that up with a 4:59 for the second mile and 5:04 split for the third mile. 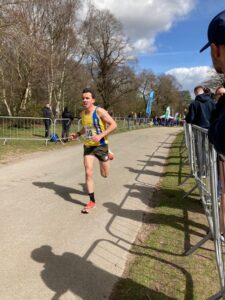 It was actually over the second half of the race that Harry really started to pick up speed though, galloping through to fourth mile and fifth mile at 4:53 pace and the sixth mile at 4:54 pace before upping the pace even further for the last third of a mile.

Even though the course came up slightly long, Harry’s official time was still an astoundingly quick 31:21, which was even faster than his time at the Night of the 10,000m PB’s.

It was a truly magnificent display from Harry and his Strava activity had him going through the 10k distance in 30:41, showing it was an even better performance than it actually looked on paper. With an average pace of 4:57, it was definitely one that Harry could look back on with immense pride.

Being a horse racing course as well, it was quite exposed to the wind in places and there were a lot of gravel sections to contend with. The second placed runner was over two-and-a-half minutes behind Harry and that was James Willingham who finished in 34:03. Then it was George Scott of Highgate Harriers taking third place in 34:20.

Harry’s lead was so commanding that it was effectively a time trial for him, so he did really well to keep focus and keep the intensity levels up throughout the run. 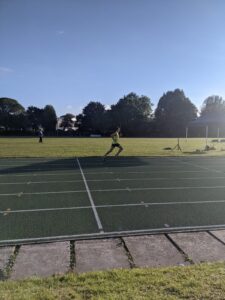 Three days later, Harry was back in action at the SETAFA Summer Track Series in Salisbury, where he took part in the 3,000 metres. It was the first time he’d ever raced a distance under 5k but he managed to pace it really well, winning it in a time of 8:40.63.

His 1500m splits were 4:23 and 4:18, demonstrating what a solid run it was and with an average pace of 4:39, it was indeed another highly impressive show of speed.

Next up for Harry, it’s the special summer edition of the Round the Lakes 10k over in Poole Park where he’ll be up against many of Dorset’s top talents in the next road race league fixture. Although there are plenty of other big names vying for victory, in the kind of form he’s in, you certainly wouldn’t bet against Harry to come out on top.