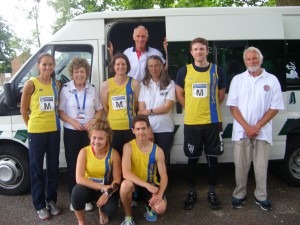 What is known, however, is that we have two National Champions, no less, from the England Athletics U20/U23 Championships at Bedford on Saturday, 20 June, namely James Lelliott and Phoebe Dowson.  James became the U23M Long Jump Champion with a jump of 7.50, a distance which isn’t James‘ PB, this being 7.57, achieved at the John Rumbold Open at Kings Park earlier this year. Phoebe achieved her U23W National Champion status in the Discus 1k with a throw of 48.27.  Many congratulations to our two Champions, and also to Kevin Hodgson and Patrick Sylla who, although not gaining championship titles, were amongst the ‘elite’ squad earning the right to compete at the National Championships.  Kevin worked his way through to the U20M 100m heats, finishing 4th in his heat in 10.98.  Patrick was a highly creditable 6th in the U20M Long Jump, achieving a distance of 6.94.  Well done to all – we are very proud of you!

Also on 20 June a Regional Schools competition was taking place at Exeter.  Rumour has it that Danielle Broom was competing, and possibly other BAC athletes as well.  Regrettably, no further information is to hand at present, and your scribe isn’t available now for two weeks, but hopefully some more up to date information can be provided after that.

The third round of the Youth Development League (Lower Age Group) season was taking place at Portsmouth at the moment of writing (21 June), and a squad of our athletes was spotted leaving Kings Park in the morning.  Hopefully, all is going well, and it is anticipated that more information will be provided here in due course.  In the meantime, the results will no doubt eventually be available at www.ukydl.org.uk.