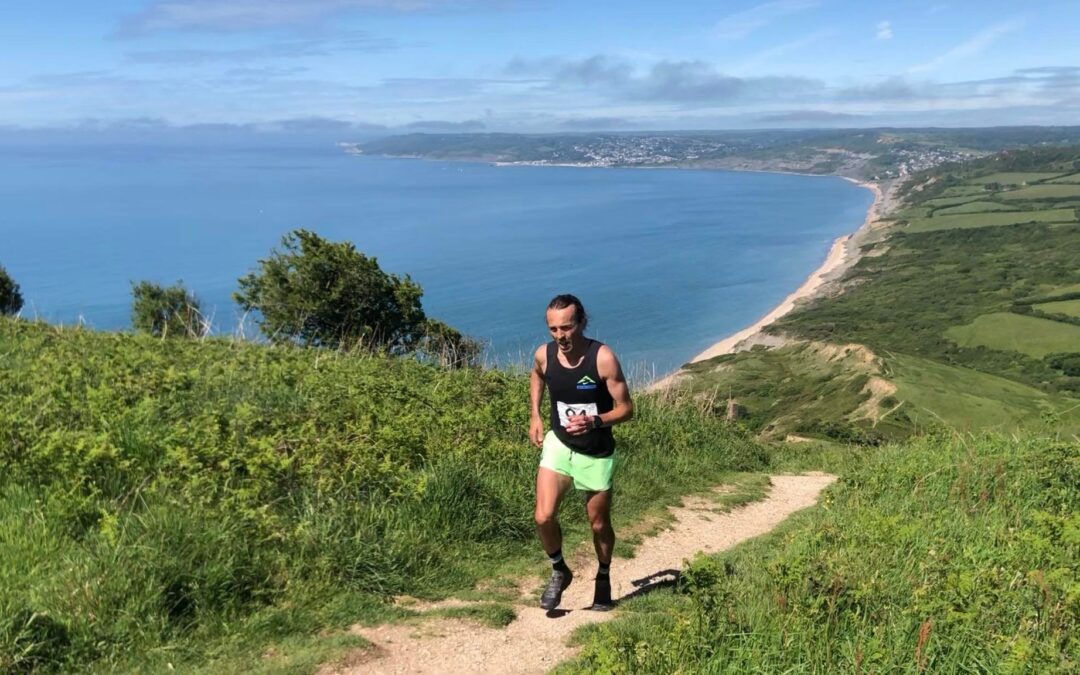 Incorporating two of the biggest climbs on the South West Coast Path, Thorncombe Beacon and Golden Cap, The Bosun is first mate and younger sibling to The CapTEN, an extremely brutal 10 mile race on the same stretch of coastline. That was the race that Jacek Cieluszecki won back in September, setting a magnificent new course record and finishing over six minutes ahead of his nearest rival.

It was also the weekend before he took part in the Salomon Mamores VK up in the Scottish Highlands. That was a 5k fell race featuring a 1 kilometre of vertical, so basically uphill all the way.

JC was also in the line up for The Bosun, looking to complete the double and secure another 32Run win. This time it was the prelude to another big race as the weekend after he was set to compete in the UK Ultra South Downs 100k.

The Bosun was only just over 10k in distance but it featured a humungous 1,850ft of climbing along the route, making it super tough but at the same time, making it right up Jacek’s street. Usually for him, the tougher the climbs, the more he can make his supremacy tell.

There were no flat sections on The Bosun route. It was all uphill or downhill, which really played to JC’s strengths. One of the good aspects about The CapTEN was that the race organisers took a keen interest in who was winning the race and how they performed. They remembered JC and were thrilled he had returned for The Bosun. They even jokingly announced him as the winner in the race briefing that took place before the race had even started!!

That really put the pressure on Jacek and may even have made some of his adversaries more determined to beat him and show that it wasn’t a forgone conclusion. 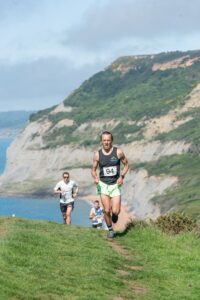 Jacek Cieluszecki had been earmarked by the race organisers as the man to beat
Photo by Sam Rose (samrose.uk)

In truth though, JC never approaches races in that way. Even though he often does come out on top, he’s a very humble man and never goes into it thinking he’s better than everyone else. He knows he simply cannot afford to be complacent. The moment he starts thinking that all he’s got to do is show up and he’s won it – that’s when he’ll come unstuck. He goes into every race wanting to put everything he has into it and that’s what gives him that winning edge.

The Bosun course starts and finishes in the village of Seatown and heads East over Thorncombe Beacon before looping through Langdon Wood and over the mighty Golden Cap, standing at 626ft. It then drops back down to the finish. 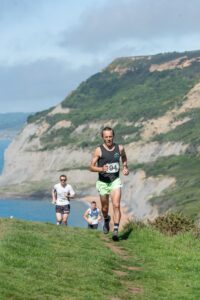 JC took command of the race from the outset
Photo by Sam Rose (samrose.uk)

It was straight into a steep climb as soon as the race began and Jacek went out hard, taking the race by the scruff of the neck. To start off with Zak Hurrell of Wells City Harriers was in hot pursuit but it wasn’t long before JC began to pull away. There are very few men out there who can match him on an upward slant. 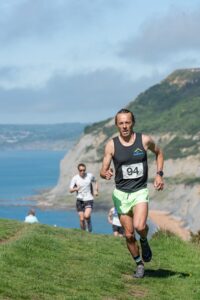 At first there were a couple of other runners close behind JC
Photo by Sam Rose (samrose.uk)

The first mile incorporated 441ft of elevation and JC got through it at an average pace of 8:18. A sharp descent followed before a slightly less severe incline took him up to 1.7 miles. By this time Jacek had already established a good lead but he couldn’t afford to rest on his laurels. He had to keep attacking it. 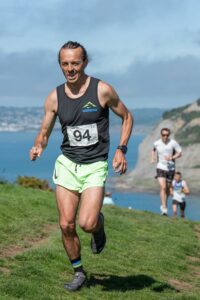 He made them look easy but the climbs in The Bosun were extremely tough
Photo by Sam Rose (samrose.uk)

Despite the climb, he still got through the second mile in 6:54 before completing the remainder of the descent and starting the next climb in a 6:37 third mile.

The fourth mile was mostly uphill, consisting of 300ft of elevation and JC powered up that at an average pace of 7:49 before registering his quickest mile of the race at 6:35. That took him up to mile 6. 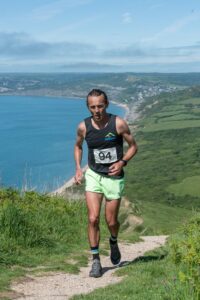 JC arrives at the top of Golden Cap
Photo by Sam Rose (samrose.uk)

A very tough climb was followed by a steep descent. It was then downhill all the way to the finish from there and JC was able accelerate to top speed as he hurtled toward the finish.

Even with the race win sewn up, he was still pushing hard and giving his all with the aim of setting the quickest time he could. That is the mark of a true champion. And since it was the first edition of The Bosun, whatever time he finished in would be the course record. 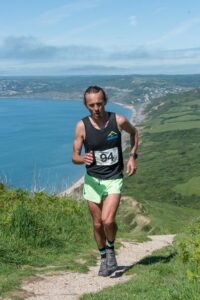 It was a tremendous show of strength from Jacek
Photo by Sam Rose (samrose.uk)

It turned out to be 47 minutes and 41 seconds, putting JC almost two and a half minutes ahead of Zak Hurrell who took the runner up spot in 50:04. Josh Carr of Thames Hare & Hounds finished 3rd in 51:09.

Egdon Heath Harriers man Graham Sherwin finished in 7th place recording a time of 59:06. Graham has been putting in some decent performances in recent Dorset Road Race League fixtures so for JC to have finished over 11 minutes quicker than him was quite an achievement. 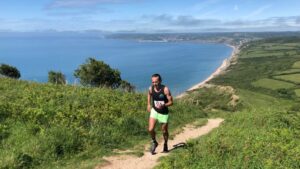 The elevation recorded on JC’s activity was 1,762ft over the duration of his 6.39 mile run that gave him a highly impressive average pace of 7:27 minutes per mile. To do that, he had to go exceedingly fast on the descents as well as demonstrating extraordinary strength to get up the inclines in the way that he did.

The result would have given Jacek confidence going into his 100k race but he knew, with ten times the distance to cover and almost 8,000ft of elevation, the UK Ultra South Downs 100k was going to be a different proposition altogether.