Jez gets his 100k encore at Belvès 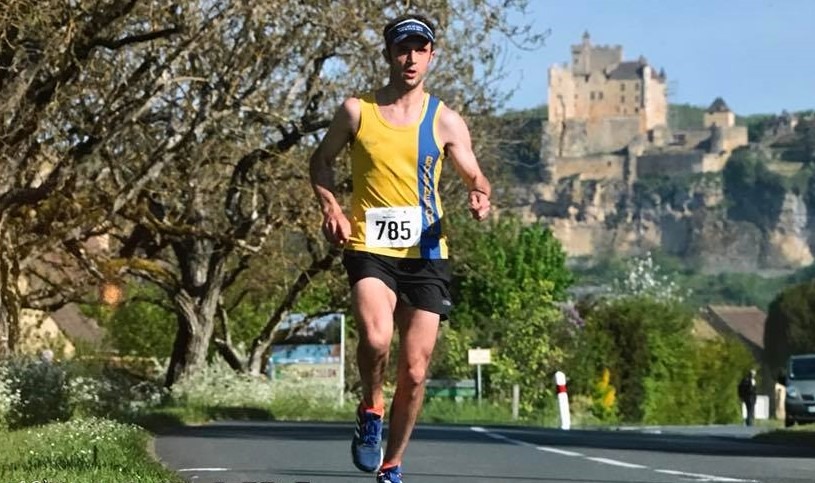 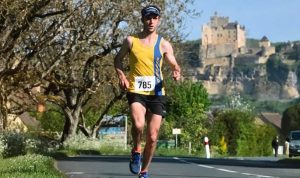 After his attempt at the UK 100k Championships had been scuppered by a stomach bug, Jez was looking to make his mark at the French National Championships instead

It was a cruel twist of fate that saw Jez Bragg succumb to a severe stomach bug just 24 hours before he was due to set off on his target race of the year, the Anglo Celtic Plate 100k.

He was left virtually incapacitated but still managed to drag himself to the start line, not wanting to miss out on the race he’d been training so hard for or the opportunity to represent England.

Amazingly, even though he was clearly in a bad way, Jez managed to run 23 and a half miles of the 63 mile race before being forced to pull out. He simply had nothing left in his body to give.

It was a massive disappointment for Jez, but he was determined to bounce back. He was now left with the prediction of finding a suitable 100k race that he could do instead.

Since he’d put in all the hard graft in training to get himself into probably the best shape he’s been in in years, he simply had to put it to good use. Cue the French National 100k Championships at Belvès.

It was the right place at the right time for Jez, and with it being the French National Championships, there was a pretty good chance it would be the right level of competition as well to help push him onto a decent time.

The course was really beautiful and was one big loop, so completely different to the 2 lap circuit he would have had to negotiate 32 times at the Anglo Celtic Plate.

The first half of the race went to plan for Jez and he was able to keep to a pace of around 6:40 m/m. At the half way stage he was on around 3 hours 30 minutes, so pretty much bang on target. He was hoping to be able to hold onto that pace but when it reached the middle of the day, the heat suddenly built up.

With the sun streaming down and no shade to hide in, Jez began to get extremely hot. The temperature soared to 32 degrees and all he wanted to do was jump in the Dordogne River, which the course followed for the most part. He was sticking his head in the sponge buckets at the aid stations to soak himself but within a mile he was bone dry again. 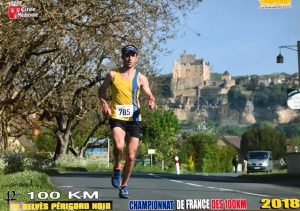 At the half way stage Jez was bang on course to finish close to 7 hours but as temperatures rose, the searing heat began to hamper his progress

Most of the French runners had accompanying cyclists with drinks on hand and water to cool them down. Jez had to make do with bottles that he had placed at the aid stations. Most of the time they were left in the sun though and by the time he got to them they were too hot to drink.

That made it extremely difficult for Jez to get the right level of hydration and certainly put him at something of a disadvantage against his French adversaries.

All these were contributing factors to a drop in pace in the second half of the race for Jez. But despite the unrelenting heat and the hilly nature of the course, Jez was determined to make it to the end.

He wound up crossing the finish line in a time of 7 hours 47 minutes and 42 seconds. That put him a quite incredible 4th place overall. This was a huge achievement for Jez, especially given the fact that he’d only recently recovered from his stomach bug and taking the extremely difficult conditions into consideration. 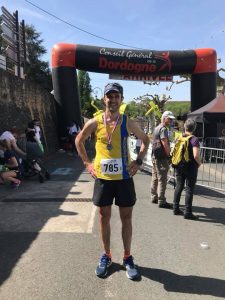 Jez did remarkably well to get to the line in a highly commendable time of 7:47:42

The only thing he wasn’t completely happy about was the time. He’d taken 4 hours 17 minutes to complete the second half of the race, leaving him with noticeable positive split. Plus 100k runners at the level Jez is at only really judge their performances by the times they post.

The benchmark is always to get to the holy grail of a sub 7 hour race. Jez has actually done that once before, back in 2009 at the UK Athletics 100k Championships. It’s a target that is extremely tough to attain though and only the very best of the best can do it.

Given his current level of fitness though, Jez feels he should have been close to the 7 hour mark. Nevertheless though, it was still a very good run and no doubt he’ll look back on it fondly in the weeks and months to come.

If recent races have taught us anything it’s that there is no legislation for the weather. It doesn’t matter who you are or how much training you’ve done. If it’s a baking hot day for instance, that is always going to take it’s toll.

On the whole though, Jez enjoyed the race and it was great for him to see some of the area. The local people he met along the way were very welcoming and were extremely proud of their race. It was the 42nd time the race had been run and it had attracted a field of over 500 runners, of which a total of 385 made it to the finish. 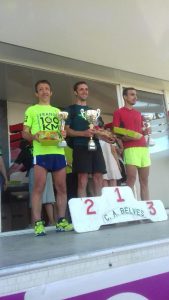 Jez brought back the trophy for winning the Open race, which was for those not competing in the French National Championships