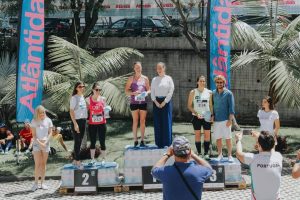 Whilst enjoying a well earned vacation in the sunnier climes of Madeira, in true BAC member fashion, Joy Wright decided to rock up and take part in an impromptu half marathon that just happened to be on in the area at the time.

The race was called Meia Maratona Atlântida and was staged on a hilly route along the south coast of the island starting at Câmara de Lobos.

Joy knew very little about the race and hadn’t planned on doing it at all. She’s currently focusing more on the track but found out about it when talking to a lady in a camping shop and just thought why not give it go. And it turned out to be a great decision.

She actually finished 4th female in the race and took 1st place in the V40 category. This came as great and completely unexpected result for Joy.

In fact, she could even have snuck into the top three, narrowly missing out by just 11 seconds. She actually thought she was in 4th place throughout so consequently wasn’t too worried when she was overtaken by two women on the last hill with just 200m to go.

As it turned out she had enough left in the tank for a sprint finish down the hill for the last 80m. In the process she overtook one of the ladies who had passed her on the hill, along with a couple of men as well. If she had known she was actually in third place, she could have perhaps put up more of a fight to hold onto the position.

When all is said and done though, she had to remind herself that it wasn’t about the competitive element, it was the experience that she really did it for, which she thoroughly enjoyed. Finishing 4th and winning the V40 category was just the icing the cake.

Joy’s finishing time of 1:42:28 was certainly a performance to be proud of. In fact, it might even go some way toward helping to restore the reputation of Brits abroad. And she wasn’t even wearing a football top at the time. She did happen to have a beer afterwards though, although in her defence, it was a beer company sponsoring the event so it would have been rude not to.