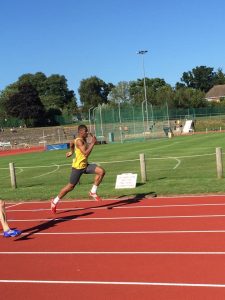 Mark Hargreaves is back! And how! After seemingly many years, Mark returned to competition in the Littledown 5 (mile) on Sunday 18 September. This race, as ever excellently organised by Littledown Harriers, is over a course which isn’t exactly for PBs, yet Mark managed to run 29.10 and finish 6th, and 1st V55. Mark wasn’t the first BAC athlete over the line, however, as that honour went to an in-form Alex Goulding, 4th in 28.59, with Billy McGreevy and Tom Paskins packing in after Mark, 7th in 29.12 and 8th in 29.44 respectively. Completing the BAC contingent, all very close, were Ross Smith, 10th in 30.05, Tony Hunt, 19th in 32.14 and Jud Kirk, 20th in 32.24. Had this race been part of the Dorset Road Race League BAC would have had a win – let’s hope for a similar result at the Hoburne 5 mile race on Sunday 25 September!

Meanwhile, on the other side of Poole Harbour, Damian Boyle was running the Purbeck Marathon, off-road, up and down, over a distance which appears to be slightly longer than the ‘statutory’ marathon.  It seems there were some issues at the start which means that the results aren’t yet available, but Damian is very happy with his 3.50 time, and believes he is in the top 20.  Damian describes the race as a “fabulous” event, run this year in glorious weather, and he appreciated the free bottle of cider at the end, which “didn’t last very long”!

Further away, on the other side of the Atlantic, David Long was competing in the Philadelphia Half Marathon.  Of his run, David says: “I was disappointed with the time, but happy how I raced.  Got a little too excited at mile 8 and didn’t respect the distance which left an emotional last 5 miles to say the least”.  Disappointed or not, David still ran 1.12.14, to finish 18th of a total field of 12206 – not too bad!!