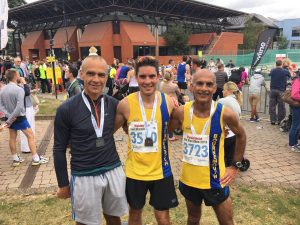 Simon Way, Chris O’Brien and Sanjai Sharma after their successes at the Maidenhead Half Marathon 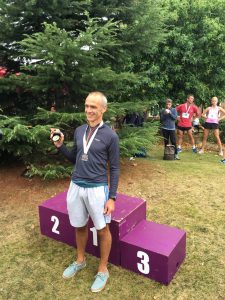 Simon Way – winner of the V50 race at the Maidenhead HM

Meanwhile, on the same date, nearer to home, Max Catterall was showing most of the field a clean pair of heels in The Beast, a tough off-road course starting and finishing at Corfe Castle, taking in, amongst various other climbs, descents, narrow cliff-top paths, etc., the notorious Jacob’s Ladder.  Max was 8th to finish of a total of 347, in a time of 1.34.13.

Also on Sunday 4 September, Bournemouth & District Special Olympics hosted a Special Olympics competition at Kings Park, with the assistance of many BAC officials and helpers, under the guidance of BAC member and coach, Tony Jones-Pert, who does a tremendous amount of work to help, support and encourage those athletes with disabilities wishing to take part in the sport.  Those who were at the event at Kings Park could not fail to have been impressed with the enthusiasm of the participating athletes, many of whom travelled considerable distances with their teams, and with the amount of enjoyment they clearly derived from competing.

So, near and far, it was a good day for BAC!

Simon Way, Chris O’Brien and Sanjai Sharma after their successes at the Maidenhead Half Marathon