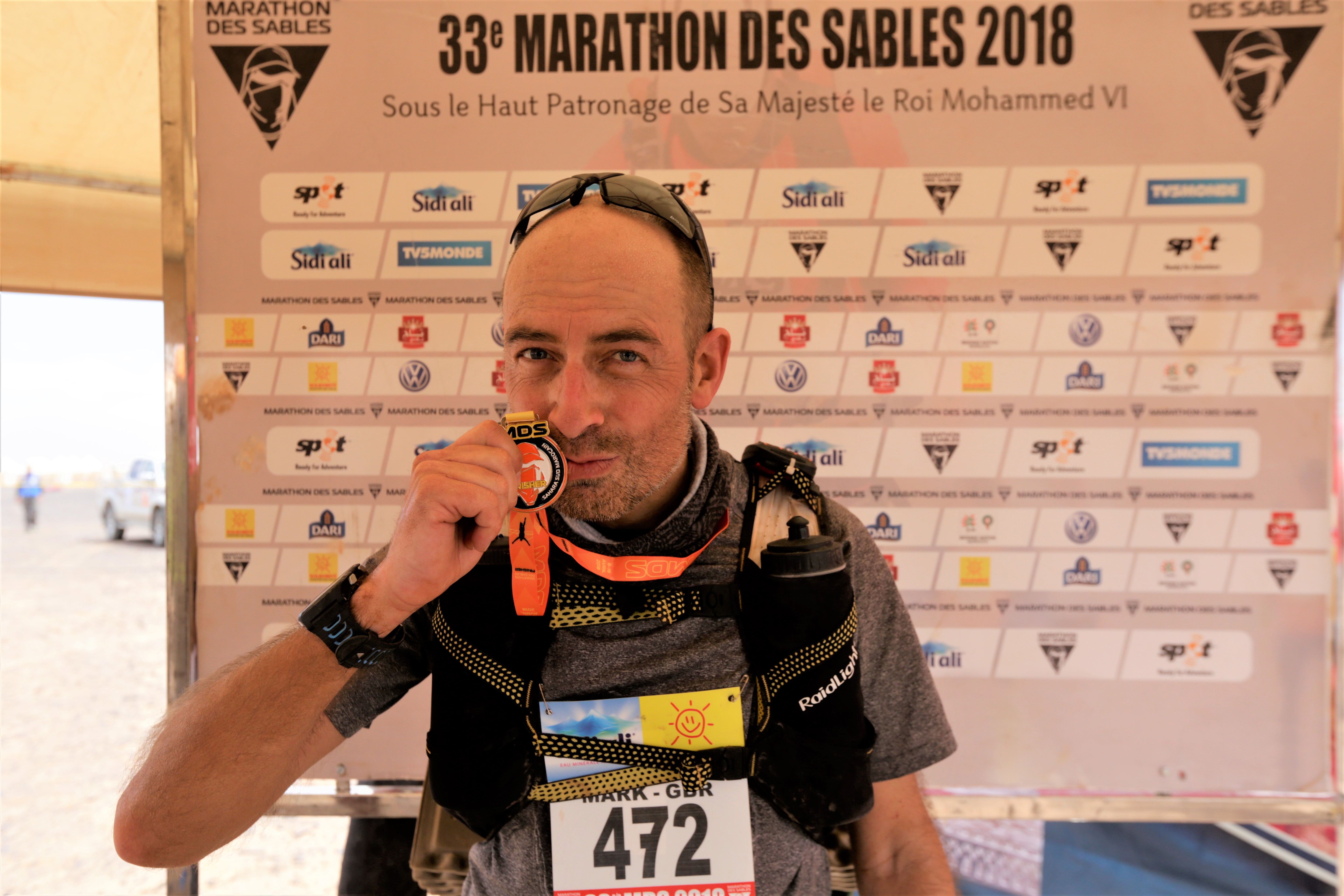 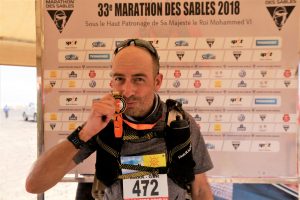 Mark Hillier was about to go on a journey that would push him to his absolute limits, both his mentally and physically, as he flew out to Morocco for the 254 km Marathon des Sables

On 6th April, Mark Hillier flew out to Morocco to join just shy of 1,000 other lunatics from a total of 50 countries in their attempt to complete the 33rd edition of the Marathon des Sables.

Reputed to be the toughest footrace on earth, the MdS is pretty much a self-sufficient 6 day ultra-marathon held over a desert course of approximately 254 km in length.

Running in 120 degree heat and with an 8 kg backpack on – carrying all your own food, bed, medical kit, even an anti-venom pump just in case any scorpions decide to get up close and personal, runners complete 6 separate stages and each evening share a cramped Berber tent with up to 7 fellow competitors.

A year ago Mark was happily running half marathon distances but then at the ripe old age of 46 his brain decided to embark on a mid-life crisis which has seen him run 5 ultras in the last 10 months, with more planned. But it’s fair to say that MdS would be, by far, his biggest challenge to date.

Commencing Stage 1 with ACDC’s ‘Highway to Hell’ blaring out as you crossed the start line (the same tune was blasted out at the start of each day), the first day was deemed to be a gentle 30.3 km ease into the event.

In reality MdS organisers had decided to throw competitors in at the deep end by introducing a lot of soft sand combined with some substantial sand dunes. However, feeling fresh and a touch excitable, Mark completed the stage in 4 hour 18 minutes, putting himself in 362nd place overall.

Stage 2 was 39 km in length and after an initial sandy climb and dunes for the first 5 km, the following 20 km was a flat monotonous drag before hitting 3 km of meaty sand dunes followed by a climb up the El Otfal jebel.

By the time Mark reached the bottom of the jebel, it’s fair to say he was in trouble struggling with the heat as well as dehydration. He managed to reach the top of the climb by screaming at himself pretty much the whole way up, before limping through to checkpoint 3, strategically positioned 4 km from the stage finish.

The last 4 km were apparently something of a haze for Mark and upon crossing the finishing line he was promptly put on a stretcher and taken off to the medical tent to be checked over and re-hydrated! 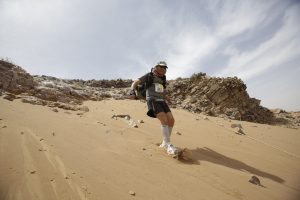 Despite being pretty much ruined he’d completed the stage in 6 hours 4 minutes and climbed to 306th position in the general classification.

Stage 3 was 31.6 km in length, containing some of the most amazing terrain and mountain top views – but with it also the biggest climbs of the whole event.

Scared and scarred by just how badly he’d been affected by Stage 2, Mark decided to take it easy by walking the first few kilometres in order to see how his body would react to having to do it all again.

As it turned out though, the breathtaking views and mountain ridge running seemed to fill Mark with renewed energy and he completed the stage with a huge smile in a time of 6 hours 8 minutes, although by being conservative, he’d dropped back to 414th place overall.

Stage 4 was the infamous long stage, totalling 86.2 km and taking in sand, sandy climbs, huge sand dunes and, of course, more sand! Mark decided against any kind of pre-stage strategy (basically because he couldn’t think of one), although he ended up running the stage with tent mate, Caleb, which turned out to be a perfect plan.

Boring each other to death for hour after hour by sharing each others life stories as well as other various anecdotes, 50 km in to the stage both Mark and Caleb were trucking along pretty well. Picking up a female competitor, Hannah around the 50 km mark and creating the equivalent of a 3-person peloton, all seemed okay(ish) as night fell and head torches came out!

But by the time checkpoint 6 was reached, 65 km in, Mark was beginning to feel quite badly fatigued and struggling with major blisters. From this point on, it’s fair to say that progress dramatically slowed, with the final 10 km being completed in absolute agony and taking what felt like an eternity (probably because it did!).

Crossing the line some 18 hours 38 minutes after the stage had commenced, Mark owed it to Caleb and Hannah for literally dragging him through and despite completing the stage non-stop he’d dropped to 443rd in the overall classification. 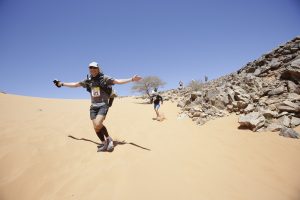 With the long stage still ongoing for those that were walking it and/or taking time to get some sleep, the following day for Mark was a rest day and an opportunity to seek medical assistance for his feet, which ended up with both being heavily bandaged in readiness for Stage 5.

Stage 5 was the marathon stage at 42.2km in length, commencing in a sandstorm and sticking with a brutal headwind for pretty much the whole stage.

Dosed up on painkillers and fuelled by fruit pastilles, Mark drew an amazing amount of energy from somewhere (probably the drugs!) and felt the strongest he had throughout the whole event, finishing the stage in 5 hours 4 minutes and climbing back up to 394th, which was to be his final MdS finishing position.

Crossing the line at the end of stage 5, Mark was presented with his medal by MdS Race Director, Patrick Bauer. MdS is Patrick’s baby and as it’s creator he’s been at the helm for all 33 editions, welcoming every competitor at the airport when they arrive and placing the finishers medal over every competitors head when they ultimately finish. He really is inspirational.

Stage 6 is known as the Solidarite or Charity stage, totalling a comfortable 7.7 km in length. Traditionally, all competitors walk the stage with their tent mates, through sand dunes and back to civilisation! It is deemed separate to the previous stages and has no bearing on your finishing time or position at the end of stage 5.

After a 6 hour coach journey followed by 2 days decompressing back at a hotel, Mark returned back to the UK. He says MdS was, without doubt, the toughest challenge he’d ever taken on, from both a mental and physical perspective – and whilst at times it took him to within a millimetre of his breaking point it was also the most amazing, beautiful, magical and inspiring event he’d ever been part of.

In the process, Mark also raised just over £3,400 for the Stable Family Home Trust, a local charitable trust based in Ringwood who support people with learning difficulties to both live and work in the community.

His final comment is that a year ago, he’d not even heard of the Marathon des Sables and if somebody had told him exactly what it entailed and that he’d be capable of completing it, he’d have thought they were barking mad. But his midlife crisis is telling him that we’re only here once so if there’s something daft/crazy/impossible that you think you’d like to challenge yourself, then his advice would be to go for it. After all, your mind WILL allow your body to go places you never thought possible!!