MATCH WINNERS! What a day at the SAL!

On Sunday 20 May 2018, Bournemouth AC played host to the first of two SAL home matches at Kings Park.

Team captain, Andrew Sherrin said he was staggered by the level of competition and how well the Bournemouth athletes performed. So many PBs! Lots of new faces who ran, jumped and threw with the same SAL commitment. It is staggering to win by such a large margin in the face of such strong opposition. Well done to everyone, the support was outstanding. A huge thanks officials, coaches for the never ending support.

BAC are now placed third in Division 2, West with a total 439 points, a short margin under Basingstoke’s 457 and Woking 495. They are still within our reach and if BAC continue to perform to such high standard, another promotion could be realised. Regardless, it’s fantastic we’re so high up the table with 16 clubs in our division.

The SAL goes from strength to strength!

As it this was a home match, the day started off a little different as athletes made their own way to the track for their respective events. However, it soon unfolded into yet another fantastic day which was buzzing with enthusiasm, excitement and determination. Much of our success comes from the atmosphere created by the team and the way we support each other throughout the day. Many came early to provide some much needed support and camaraderie in the form of vocal, emotional and spiritual support.

The weather was conducive for some great performances as it was warm with only a light breeze along the back straight. The match kicked off at 12.00 with the usual 400mH, throwing and jumping. 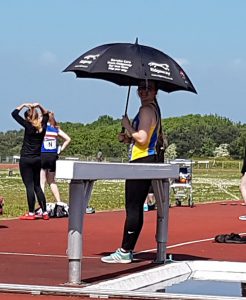 Danielle Broom seeks solace under the shade of her brolly

The women struggled to get a B string runner yet Janet Dickinson did not fail to disappoint by running an outstanding PB of 76.1s for 2nd place. 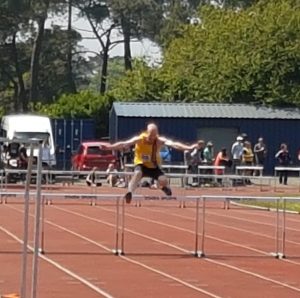 Pole Vault:
A great performance in PV as Stewart Cotterill came 2nd (A string) with 2.35m and a win by Steve Cox with another Pole PB of 2.35m.
Rachel Matton made a great debut impression by clearing 2.15m for 2nd place and Nikki scaled 2.05m to win B string.

Long Jump:
More success in LJ with a wins in both A and B string for men and women! Rob Woolgar won with 6.31m and Joe Hayward in 5.45m.
Amelia Dobson won in 5.04m and Olivia Galloway matched it 5.04m for more 1st place points. Victoria Coombs was non scoring and jumped 3.53m.

The women performed well with two great wins in A & B string. Chloe Burrows ran a great SB of 12.5 and Jazmin Cooke stormed home with a PB in 12.9. Non scorers Brooke Ironside and Lydia Rogers both ran a great 12.9s!

Brooke Ironside stepped up again with an outstanding 26.1 PB for 2nd place, A String and Rebecca Hannibal also came 2nd (B) with an SB 27.7s.

400m:
Muiris Egan stepped up again with a convincing win in 400m in A string with 51.6s SB and the versatile and dedicated Adam Nicholass scored valuable points with 4th in 63.5s.
It was 3rd place for Joy Wright with 62.9 and a well-executed 1st place for Abigail Richardson in 64.2.

800m:
Lewis Bartlett ran 2:25.5 but the only yellow vest due to an injured runner pulling out at the last minute runner.
It was a real treat to watch the women’s 800m with a highly competitive race as Abigail Richardson ran 2:24.9 for 2nd place and Holly Collier a great 2:26.8 for 1st B string. Laura Reeves stepped in for a great non-scoring PB 2:41.1.

1500m:
Rob McTaggart aka Tag, seized valuable points for 3rd place in 4:21.6. Tag is another valuable asset to the club, with his versatility in running various events from shorter to the marathon. He also competes for the Road Running section alongside many others such as Steve Way, Steve Cox, Harriet Slade, Joy Wright …………. It’s great to see this kind of dedication and realisation of the need for both speed and endurance to enhance your chosen discipline or event. We welcome more Road Runners to the track and hope more follow in future.

Next up, the women’s 1500m saw Holly Collier back in action with a great 2nd place (A) in a time of 5:08.2, a determined race to the line less than a second ahead of the athlete behind and Lauren East clinched another 2nd in 5:48.9. The points kept rolling in! 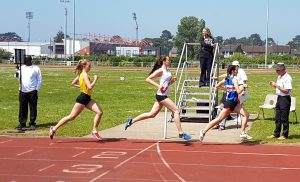 The Men’s 3,000m welcomed Steven Way to the track where he nailed a 9:07.1 SB for 3rd place despite a hefty week of ultra-marathon training. He even ran a 20 miler that morning as a warm up! Another display of determination and dedication amongst the BAC athletes. Jacob London ran a great PB, 9:45.7 in the same race for 3rd place (B) well ahead of the last runner. Another welcome to Paul Drake, making a big come back with his first race on the track in over 20 years. Just a blink of an eye to many. He ran a well-paced 10:40 and is keen to compete again for BAC. Paul will be another Masters athlete to watch for inspiration as he gets fitter and faster.

The Women’s 5,000m increased the BAC points tally with Nikki Sandell’s 20:05.9 SB for 2nd A string and Julia Austin’s win in 21:01.2 PB. Welcome to Julia as this was her debut match for BAC and no better way to start than with a win! 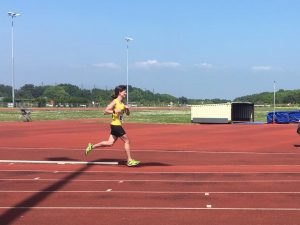 The Women’s 100mH was a great race as Olivier Galloway and Joy Wright won both A and B string in 15.1s and 18.5, PB respectively. It was a tough race and the runner next to Joy hit a hurdle and fell. It didn’t hinder Joy from giving it everything as she was well away with the hurdle fairies to realise. 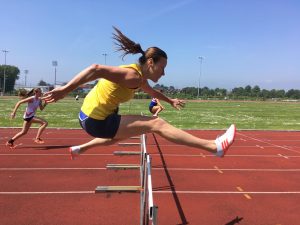 The men stepped up next to match these wins in an exciting 110mH against strong competition. Cameron Hale ran a PB of 17.1 and Rob Woolgar’s another PB of 17.8. 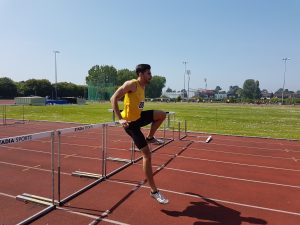 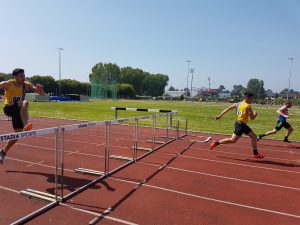 1500m Steeple
Despite some concerned faces, Holly Collier stepped on the track to compete in yet another event, an event that she had never tried before. Holly had an incredible race and wasn’t fazed by the barriers nor the effects of the previous 800m and 1500m on her legs. In fact, Holly smiled the entire time and even gave out a good squeal as she hit the cold water jump. Needless to say it was a PB but also a great 2nd place in 6:12.6. Nikki Sandell also competed in the same race with the remnants of the 5,000m in her legs. Nikki is extremely dedicated and committed to the club. She continues to improve her distance running and also the Pole Vault. This was no exception with a fantastic win in a PB time of 6:23.1. 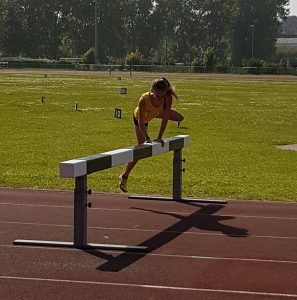 Holly flying over the steeple 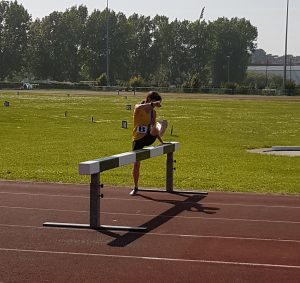 The strength and enthusiasm of the athletes continued. Steve Cox and Adam Nicholass ran the 3000 SC ensuring the team scored as many points as possible and both finished 4th. Steve ran a PB, 14:56.8 and Adam and SB 15:47.9. 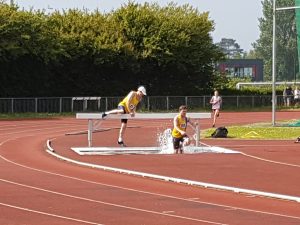 Adam & Steve at the water jump for a cool off!

High Jump:
BAC had a strong field out for the HJ with Lewis Sainvall’s winning jump of 1.95m, a great PB! Cameron Hale won B string with a 1.78m Jump.
Jazmin Cooke won A string with an outstanding 1.62m PB after running back and forth from the 4x100m. Not a bad day, nipping across to break a club record, then popping back over to smash your High Jump PB. Great performance Jazmin! Victoria Coombs jumped 1.23m to bring in even more points. 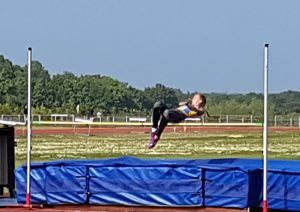 Shot:
Top performances and top points from Dan Brunsden and Andrew Sherrin, both winning the shot with 15.19m SB and 10.41m respectively. Stephen Dobson threw 9.95m (ns). It is still undecided who won the roaring competition but the betting shops have set good odds on Dan.

The women scored top points for A string with Danielle Broom’s outstanding PB of 11.40m. Isabella Shepherd threw 7.58m to bring in great points for 3rd.

Isobella Shepherd also delivered in the Discus. Although she was unwell, in true BAC spirit she stuck to the task and did all three heavy throws to the best of her ability. She threw 40m+ twice in the Hammer and placed 2nd in the B string against a talented field. Well done Issy! Danielle came 2nd in A string with a great throw of 39.69m. 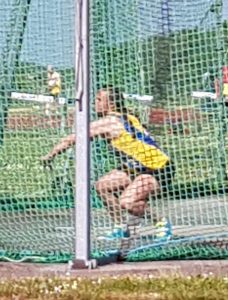 Issy gets down to business in dicuss 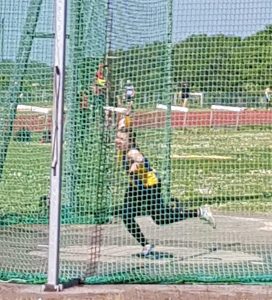 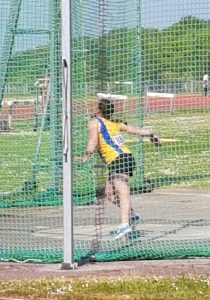 Dan won the discus with a convincing 43.76m, well ahead of other competitors. Andrew Sherrin won B string 29.04m and Steven Dobson threw 18.59m (ns).

Yet again there were more top performances and maximum points in the Hammer throws as Dan and Andrew won A and B string 46.26m and 36.82m SB respectively.
A great win by Danielle in A string with 56.96m and Issy 2nd as mentioned above.

A great day for BAC throwers and a huge boost to the points table! 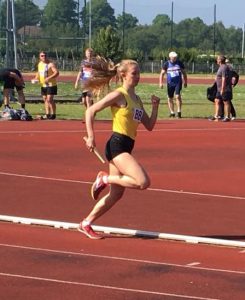 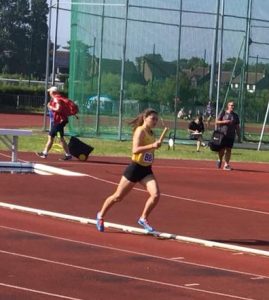 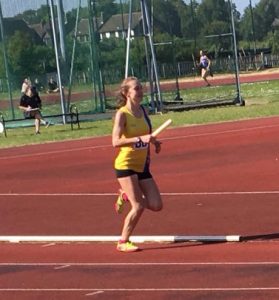 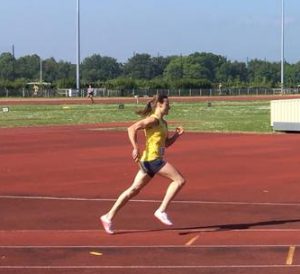 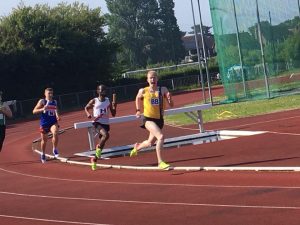 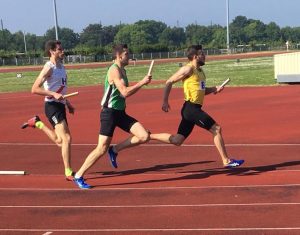 Due to a few last minute injuries BAC were in need of male runners to take on the 3000m steeple chase and female runners to fill the 5,000m and steeple. Needless to say, BAC athletes stepped up to the mark and pulled through to score top points. Thanks to all those volunteering for events at the last minute, particularly in events they never train for, e.g., hammer throwers taking on the 4x400m relays and sprinters scaling the steeple chase.

Thanks to the younger athletes for giving up your valuable exam revision time and even adding it to the day. 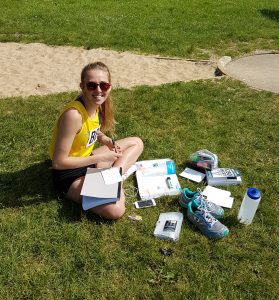 Thank you again for all the BAC officials, helpers and supporters, including family and friends. Well done all!

Remember we can still catch Basingstoke! 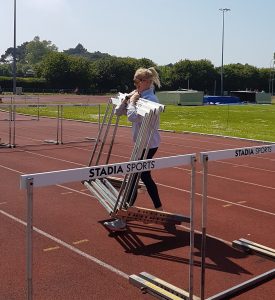 Anya has a go at breaking the Hurdle Carrying World Record