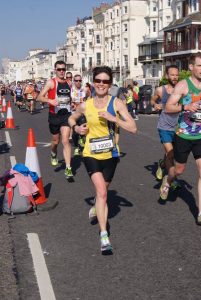 On a blisteringly hot day on the south coast, Nikki Sandell took on the Brighton Marathon. As if the sweltering conditions weren’t tough enough, Nikki managed to turn her ankle over 7 miles into the race.

Instead of quitting though like most mortals would have, Nikki soldiered on to complete the race in an incredible time of 3 hours 8 minutes, making her 14th overall female finisher out of 4,818. This was no mean feat (excuse the pun), especially when you factor in the immense pain she was experiencing for the remaining 19 miles after ankle-gate.

Unfortunately, the injury did hamper Nikki’s target of a sub 3-hour marathon, which, given her recent form would possibly have been achievable. She secured a new half marathon PB of 1.28.08 at Blackmore Vale in February and recently clocked a superb time of 18.59 for 5k on the track. 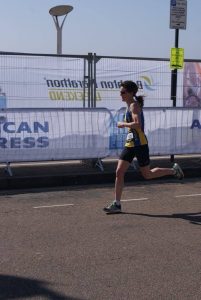 Nikki digs in to conquer the Brighton Marathon with tremendous tenacity

The race was generally well organised despite a slightly chaotic first few water and gel stops. Nikki almost missed her first gel stop and had to get it out of the box herself. It was a predominantly flat course but with a few long slight inclines that can take it out of you without you even realising. The wind didn’t present too much of a problem on the day, although there was a surprising headwind to content with for the final 3 miles.

Nikki was feeling strong toward the end of the race and did manage to pass quite a few people in that last sector but she feels that her pace wasn’t anywhere near what it should have been had she not suffered the setback.

Nevertheless, the time she did get is still a marvellous achievement though on a day like that. Let’s hope she makes a speedy recovery and is back tearing up some other courses soon.