No easing up for BAC boys at Eastleigh 10k 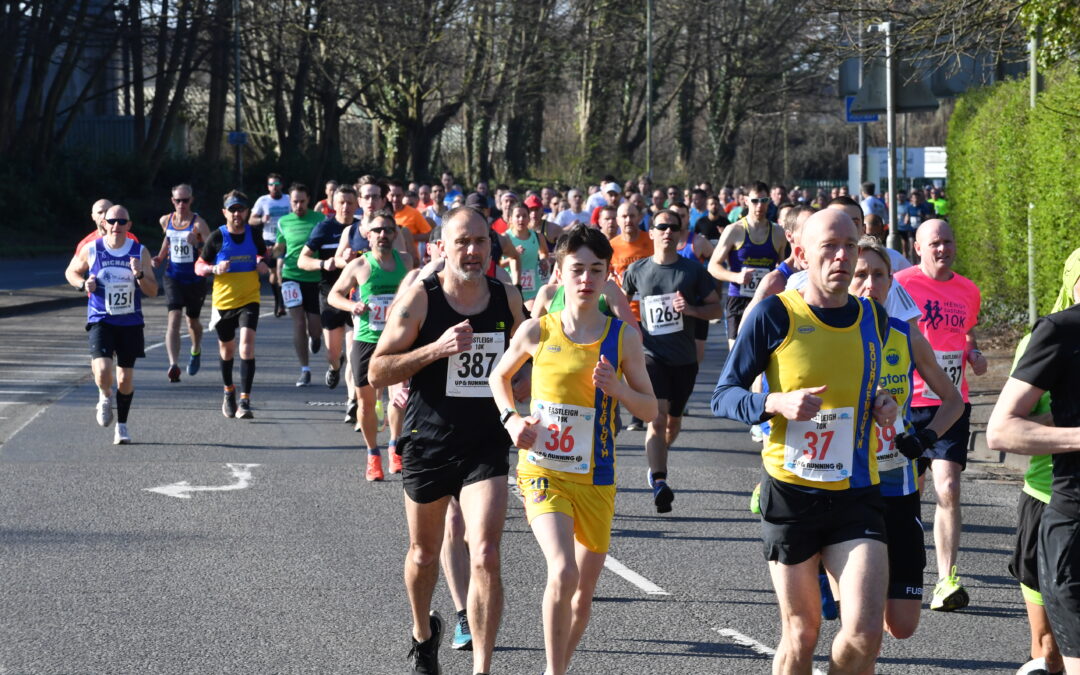 Unquestionably one of the best and fastest races in the southern region, the Eastleigh 10k provides a perfect platform for runners in good form to fulfil their potential. That’s certainly what a number of Bournemouth AC members were hoping to do when they took to the start line on a sultry Sunday morning.

The last edition of the Eastleigh 10k took place in August and that was when Trev Elkins recoded his 10k PB of 37:24. He was looking to improve on that this time round and had been putting in some good training including some quick parkruns in preparation.

Another man who has been running extremely well of late was Sam Jackson and he was also ready and raring to go, harbouring hopes of a sub 36 minute time. His 10k best was set at the Christchurch Christmas 10k in December and that was 36:35 so again, that was a good target to try to eclipse.

And of course, Sam’s brother Luke who also runs for BAC was in action that day as well. He’d been suffering from a bad back though so wasn’t expecting to be challenging his PB time of 39:03 which was set back in 2013. But he had been training well lately so there have been signs that he’s coming back into form and he did run well in the Christmas 10k to record a time of 40:06.

Barry Dolman was there as well, along with his son Harry who has been training with the BAC juniors. Both Barry and Harry have really been enjoying their running recently and after a first place finish at Lymington Woodside parkrun, Harry was really beginning to excel. The Eastleigh 10k would provide a great test for him against some top call opposition, most of whom would be significantly older than him. 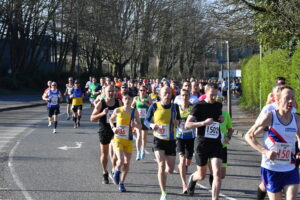 Testing yourself against high quality opposition is one of the best ways to improve and that’s what Josh has been doing recently and it’s really been working. His PB of 33:30 was set at the Tatton 10k last Spring so that was the target for him to aim for. 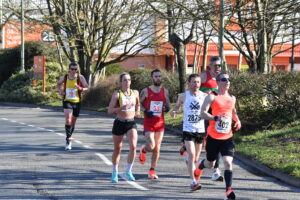 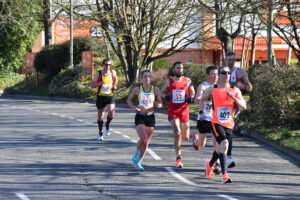 He had hoped to get a bit closer to a sub 36 but got a stitch at 6k so had to slow down a bit to get rid of it. It was still a superb run from Trev though and another step in the right direction. 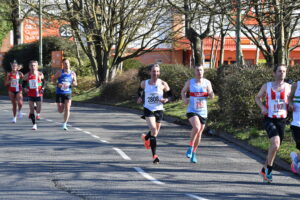 Sam was agonisingly close to a PB but just missed out

Although he felt like he struggled a bit but it was still a good solid run for Sam and there’s no doubt that if he keeps working hard and training well then faster times will come. 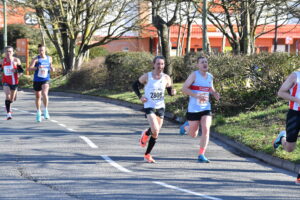 It was still a good run from Sam though to finish in 36:39 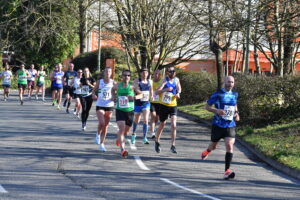 Luke Jackson (black headband) was hampered by back issues but still got round in 41:05

Proving that talent definitely does run in the family for the Dolmans, Barry finished in an excellent time of 38:33 to come in in 194th place and Harry got round in 39:35 which put him in 241st place. 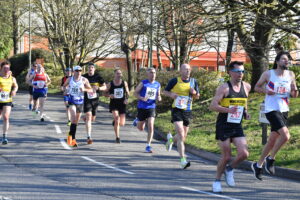 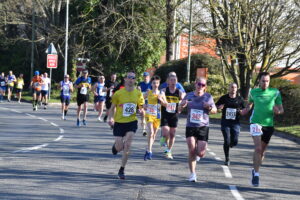 Harry didn’t come in long after, getting to the line in 39:35 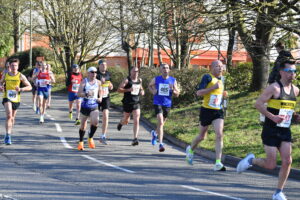 Barry’s running has really turned a corner of late 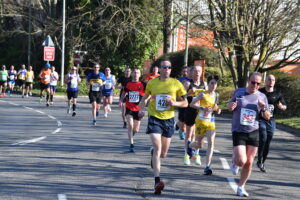 Perhaps the most outstanding run of the day though from a BAC perspective came from Josh Cole. His preparation for the race wasn’t great as he’d been travelling about a fair bit resulting in a disruption to his taper.

Nevertheless though, he set out fast, with a 5:02 for the first mile. He worked hard over the first couple of kilometres to get onto the back of the second group as he felt like that would put him in a good position. 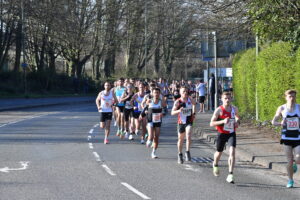 He possibly did pay for that a bit from 5 to 8k where he slowed a touch and then he suffered a lot over the final 2k, although that is to be expected really. He was trying to go with everyone who came past him for as long as he could hold on.

Josh puts absolutely everything into his races and he ended up full on sprinting the last quarter of a mile to overtake Will Cullen and seal 22nd place overall in an astonishing time of 32:29. 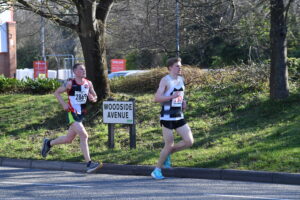 That consisted of a 16:06 for the first 5k and a 16:23 for the second 5k and his average pace for the run was an electric 5:15 minutes per mile. It really was a terrific run from Josh and he’s already looking forward to doing it again next year.

He was very pleased to get his awesome new PB in before the birth of his son Sullivan who arrived just a week later. If he gets the fast genes passed down from his dad, there’s no doubt he’ll be a cracking runner when he’s older too. 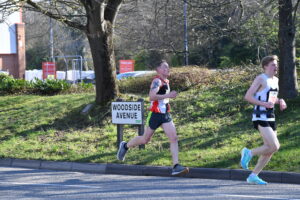 Josh blasts through to a remarkable PB of 32:29

The race winner was Alex Lawrence of Victoria Park Harriers & Tower Hamlets and he whizzed round in an incredible time of 29:28. That was enough to fend off competition from Daniel Mulryan of Thames Valley Harriers who was runner up in 30:10. Then it was William Cork of Brighton & Hove who crossed the line in 30:26, just ahead of Southampton’s Aiden Lennan who took 4th in 30:29.

Twemlow man Lee Dempster managed a brilliant PB of 33:13 to take 42nd place, coming in just before Sarah Astin of Belgrave Harriers who was first female, registering a magnificent time of 33:17.

Lonely Goat man Andy Leggott was 48th, clocking a superb time of 33:47 and Poole AC’s Brian Underwood secured an excellent PB of 33:49 to take 50th place in the overall standings, just behind Matt Risden of Southampton.

Wimborne AC man Damien Huntingford also improved his Power of 10 profile with a stunning time of 34:59 which put him in 83rd place overall. Poole AC woman Vicky Ingham was 6th female, crossing the line in 35:11 along with Twemlow man Steven Rigby.

Tom Andrews of Lytchett Manor Striders also had a cracking run to get round in a time of 35:29.

It was great to see so many Dorset based runners at the top of their game and smashing out PBs to prove that the local running scene is currently teeming with talent. This healthy level of competition can only serve to spur Bournemouth AC runners on in their quest to be the best that they can be.