Parkruns and Manchester Marathon – PBs and a win 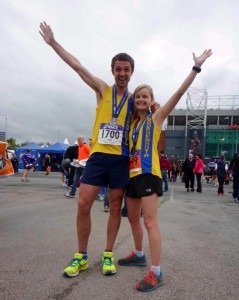 Jacek Cieluszecki was (again!) the winner (and first of a record field of 627) of the Poole Parkrun on Saturday 5 April, with Peter Thompson second and Rob McTaggart third.  Both Jacek and Peter ran PBs for this course.  Also running in Poole Park were Steve Way, 9th (not a PB for Steve, whose running at the moment is planned and controlled in preparation for his rapidly approaching 100k), and Joe Arundel, 11th.  Meanwhile, in Kings Park, of the 177 competitors, Duncan Wells was 4th, Ian White 5th and Jud Kirk 7th.  Congratulations to Bridget Dence, the first lady to finish, and it was good to see Ryan Birchell, category JM 11-14, competing in the Bournemouth Parkrun for the first time.

The next day, 6 April, saw Gemma and Jez Bragg take on the Greater Manchester Marathon.  The forecast for the day was consistent rain and strong winds…………….but thankfully the rain held off and although there was an annoying wind it didn’t stop the 8030 runners to the start line, hoping to get that PB!  The course itself was fairly flat with a few small climbs and ran around the ouskirts of Manchester city, not particularly scenic but the crowds and support were fantastic.  Both Jez and Gemma had solid runs, with Jez finishing in a time of 2.43.09, placing 33rd overall, missing out on his PB by just 6 seconds.  Gemma finished in a time of 3.18.26, placing 35th female and 676th overall, making it a PB by nearly 9 minutes, and both Jez and Gemma ran negative splits!  It was a long drive home from Manchester after the marathon, especially on tired legs, and they were both happy to get home and shower before celebrating with a glass of vino! 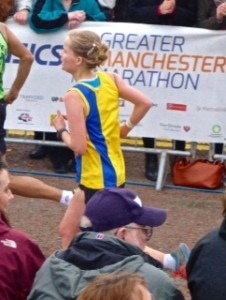 Gemma Bragg in action in the Greater Manchester Marathon