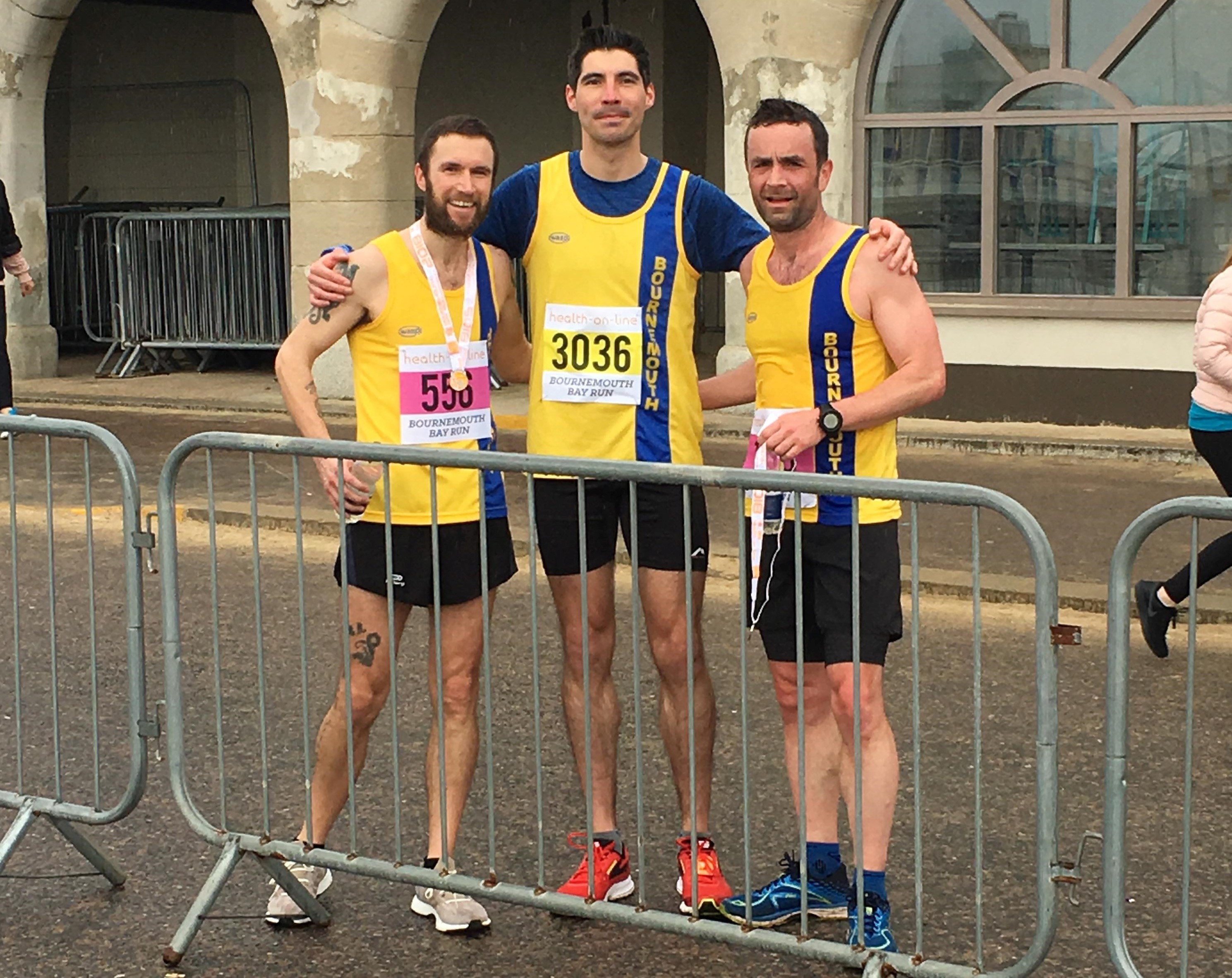 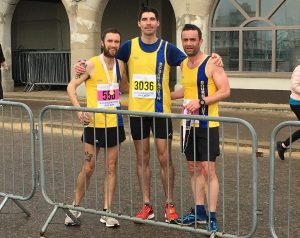 It’s that time of the year where the races come thick and fast as we build up to the showpiece event of the running calendar, the London Marathon. For some Bournemouth AC members, that meant heading to the seafront again, just as they had the previous weekend at the Easter Quarter Marathon. Instead of Boscombe though, it was over to Bournemouth Pier this time for the Bournemouth Bay Run.

The event started off with a 10k race, which featured four BAC hopefuls. Trevor Elkins, Damien Boyle, Jo Dilling and Julia Austin were all looking for strong performances to compliment the hard work they’ve been putting in in training.

The Bournemouth AC men in the race, Trevor Elkins and Damien Boyle became locked in a battle for supremacy.  At first Trevor was ahead as they made their way along the promenade.

The first 5k went very smoothly for Trevor, going through in 18:51. It was the zigzag that really knocked the stuffing out of him, interrupting his rhythm and resulting in a downturn in pace for the immediate aftermath. 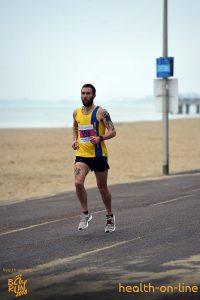 Trevor Elkins made a good start to the race, finding some good pace along the promenade

Overtaking Trevor on the zigzag, Damian pressed on when he reached the top. Trevor tried to track him once they got to the top but Damian had pulled away by a couple of seconds.

A bit of cramp started to kick in at that point and Trevor had to utilise some breathing exercises to get himself back in contention. It had taken him a couple of kilometres to recover from the zigzag and get back to his earlier pace.

It was then a case of holding on for the final 2k for Trevor and he really had to dig deep in the final mile as they battled the headwind on route back to Bournemouth Pier.

It was Damian who got to the line first though, clocking a superb time of 38:31 which put him in 12th place in a field of 920. Trevor filed in 12 seconds later to take 13th place a time of 38:43. There was very little to choose between the two in the end. 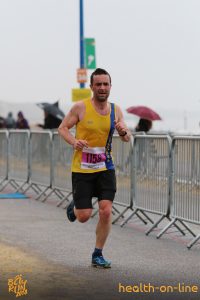 Although he’d had a good run and bounced back well from a couple of recent disappointments, including a slightly off-key display in the Bournemouth 10 mile race, Trevor wasn’t wholly satisfied with his run.

He was pleased with his pace for 8 kilometres out of the 10. But it was the 2km in the middle that let him down a bit. Trevor has run some cracking 10k times on the treadmill and has been hitting the 36’s in the gym. He’s finding it hard to replicate that form outside though. It’s frustrating because he knows the aerobic fitness is there. It might just be that he needs a little more strength in his legs. 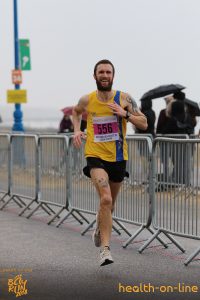 Trevor was fairly pleased with his time of 38:43 but feels there is still room for improvment

Initially, Damian’s main target was the London Marathon, where he was looking to attempt a sub 3. However, he ‘accidentally’ signed up for a 50 mile ultra in Snowdonia, so that has now become his main priority.

The theory behind this is that blowing up at London would mean suffering for an hour at the most, whereas not being prepared for two ascents up Snowdon could mean over 10 hours of suffering.

That said, he’s still hoping for a small PB at London and will look to complete it in around 3 hours 10 minutes. It will be his first time of running the London Marathon so he’s very much looking forward to finding out what all the fuss is about. 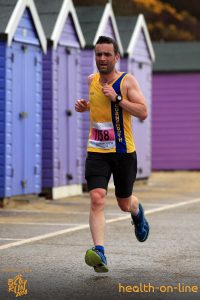 There were also two Bournemouth AC ladies in action, with Julia Austin and Jo Dilling both hoping to make a splash. It was Julia’s second race for BAC, after the Easter Quarter Marathon that she did the previous week.

Having recently moved to Southbourne from Princes Risborough, Julia is still trying to find her feet and settle into the area. Joining BAC will hopefully help her integrate into her new environment and push on with her running hopefully as well. 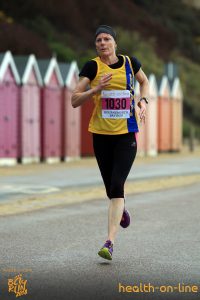 Julia quite enjoyed her run in the Bournemouth Bay 10k, although she felt the course was harder than it looks, with a lot of steady inclines in there besides the dreaded Gordon’s Zigzag. She crossed the line in 60th place overall with a time of 44:50.

That made her 13th placed female and 1st in the F45 cateogory, just as she was in the Easter Quarter. Although her run was a minute or so slower than her last 10k time, which was in August 2017, it was still a pleasing result for Julia and it is nice to see her already picking up some age category wins. 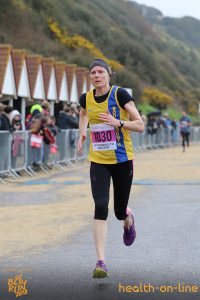 Only having recently moved to the area, Julia has hit the ground running, taking her 2nd F45 category win in as many races

After doing two cardio classes the day before the Bournemouth Bay Run, Jo Dilling was kind of in two minds about doing the race. It was the thought of being annoyed with herself for not doing it but persuaded her to give it a go. 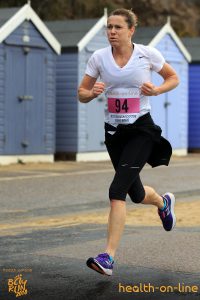 Despite doing a couple of cardio classes the day before, Jo Dilling found the strength to run well in the Bournemouth Bay 10k

It was a good job she did as well as it turned out to be a pretty good run for Jo and she was not far off her time in this two years ago. She crossed the line in 76th place overall in a time of 45:43.

That made her 14th placed woman behind Julia and put her 2nd in the F45 category, also just behind Julia. If she can keep her training with the club going, Jo is hoping she could improve on this next time. 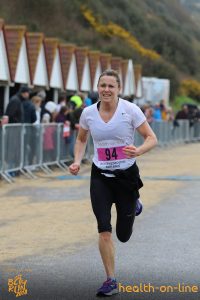