Team and individual wins, and a clutch of County medals, meant this was a successful event for BAC, but there were some disappointments too. 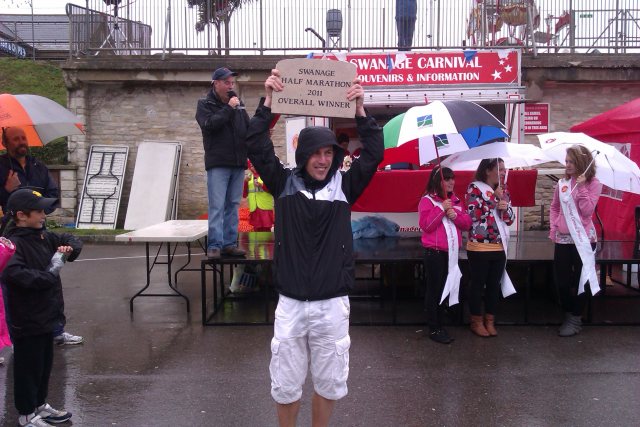 Congratulations to Rob McTaggart, whose form continues to improve, on winning outright what is a tough, undulating (some would say hilly!) half marathon, in conditions which could have been better, although admittedly could have been a lot worse. The heat which is so often a feature of this race gave way to cool, damp weather this year, but with a substantial wind which, fortunately, was blowing in a direction which impeded the competitors only now and again.

Rob was followed into second place by club captain, Simon Munro, and the next two BAC finishers, Jacek Cieluszecki and Graeme Miller, with Rob and Simon, made up the team which won the overall team prize.

Richard Nelson, as BAC's fifth scorer, completed the Dorset Road Race League team. It appears from an initial look at the results, without extracting the non-League athletes, that BAC has won the League in this race, but this is subject to confirmation, and it has to be said it was a close-run affair. Purbeck Runners were there in strength, and without any one of our first five finishers, BAC would certainly have come in behind them, and possibly one or two other clubs as well. We certainly cannot afford to relax!

The race was also the County Championship Half Marathon, and congratulations to Janie Chapman, who, as the second lady overall, earns herself a Silver medal, and, in addition, a Gold medal as the first in her age category. Rob McTaggart is, of course, the County Half Marathon Champion, and Gold medallist, for this year, and Simon Munro the Silver medallist.

One very unusual result was that Stuart Fox, instead of leading the BAC team home (often with an overall win!), this time was almost the last BAC to finish. Stu was seen, having apparently pulled out, at about four miles, but he restarted to finish the race. It appears from subsequent enquiries that the problem was cramp, so we all sincerely hope that there is no injury, so that Stu can continue fully his training for the Berlin Marathon later this year. One can only admire the fact that Stu didn't pull out altogether, but carried on with the race, most of which must have been very unpleasant for him. We wish him well for the rest of his training.

Also, spare a thought for Andy Gillespie. Andy had had to pull up whilst training the previous Wednesday with a hamstring problem, but, having rested Thursday and Friday, thought that he may be OK for the half marathon, but found himself in pain very early on. However, having "never had a DNF", Andy continued to the finish line, with a determination which demands our respect. Hopefully, Andy will soon be over the problem, and back to full training.