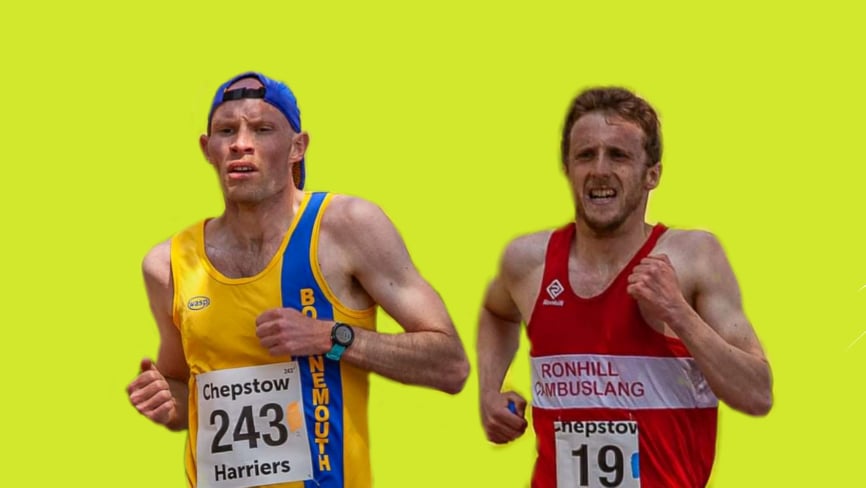 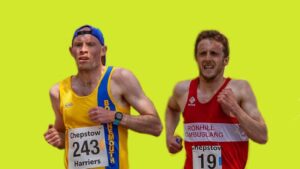 It was a return to the realm of the cut and thrusts of real, no frills, straight up, all-out racing when Rob Spencer and Grant Sheldon took to starting grid for the Speedway 10k

In an event billed as “Old School racing in the modern world”, the concept of the Speedway 10k is simple. You go there, bang out a fantastic new PB, and then go home happy afterwards. At least that’s the theory anyway.

The race organisers certainly do all they can to create the right  environment for elite club runners to reach their full potential anyway, providing a fast, flat, two-lap course, with chip-timing, at an easily accessible venue.

The event is only open to men who can run a sub-35-minute 10k and women who can go sub-38, so the standard of the field is guaranteed to be high. There is also prize money up for grabs as well to encourage higher quality athletes to get involved.

This edition of the race featured an appearance from one of Bournemouth AC‘s fastest gunslingers in the shape of Rob Spencer. Rob has been in scintillating form of late, as he demonstrated when he posted a 24:47 in the EA 5-mile Virtual Road Relay in January.

Based on that performance it was pretty clear that he’d be in good shape to topple his current 10k PB of 31:35 which was set at Goodwood, in Chichester, back in February 2020.

Of course, the proof of the pudding would be doing it in an actual race though and at the Speedway 10k, he was going to get that chance to show what he’s made of.

Joining Rob in the race was fellow Bournemouth-based athlete Grant Sheldon. Grant is a pro triathlete, originally from Scotland but now spending most of his time down south.

He’s perhaps most famous in this neck of the woods for his jaw dropping 13:38 5k in the Virtual National Road Relay in April last year which was quickest time of all. Using the Cowell Drive loop by Littledown to record that, it caused quite a stir amongst the BAC squad when the news filtered through.

Grant occasionally trains with Craig Palmer and some of the other Bournemouth AC members and has also expressed an interest in doing some coaching at the club. In fact, he’s already come along to a few of the Tuesday night sessions to work with top EA coach Tom Craggs.

Rob didn’t really have any specific expectations in terms of what sort of time he might be able to produce. He just wanted to give it an honest, hard effort to prove that his last few months of training have been working.

The runners were set off in a wave start system with each wave consisting of 30 athletes. Rob was in the second wave with the 31-minute-ish runners.

Sticking with the front group of runners in the wave, the pace was fast and ferocious, but Rob took it in his stride. Managing a 4:44 for the first mile, he followed that up with a 4:48 for the mile two. 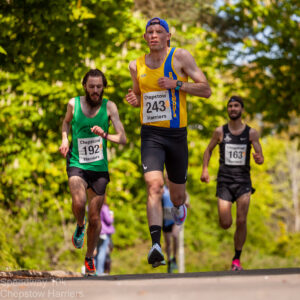 The end result was an astonishingly quick time of 30 minutes and 46 seconds. It was a huge PB for Rob, 49 seconds quicker than his previous best, and he was delighted with that. 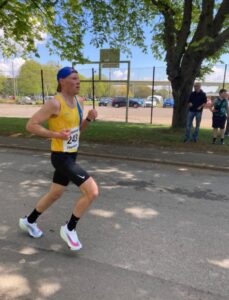 Rob put in an outstanding display to record a phenomenal new PB of 30:46

Finishing 2nd in his wave, he’d even managed to catch a few of the wave one runners as well which shows what a strong run it was. His average pace for the race was 4:55 and it was enough to see him take 27th place on the overall leaderboard in a field of 136 athletes. Given the standard of the field, that was a magnificent outcome for Rob.

Meanwhile, Grant was starting in the first wave so with his engine revved, he was ready to go as soon as the chequered flag was lifted. And by the first chicane, he was already up to top gear. 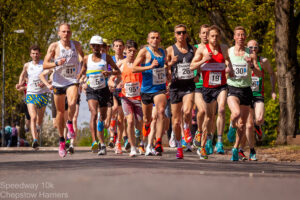 Weighing in with a 4:37 for the first mile and a 4:38 for the second mile, there weren’t many in the field who were able to sustain that sort of pace.

At the 3k point, Grant and Omar Ahmed of Birchfield Harriers went off the front of the field. They then had a good little battle over the next couple of miles, with Grant registering a 4:42 and 4:49 for the third and fourth mile. 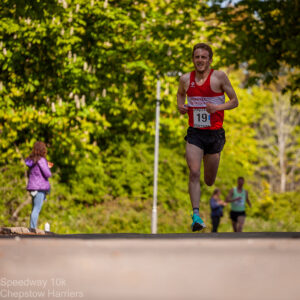 At the 7k Omar managed to break Grant and powered away to seal the win in a time of 29:18. Hitting 4:49 pace for the fifth mile and 4:56 pace for the sixth mile, Grant completed the remaining 0.2 of a mile and zoomed over the line to secure 2nd place with an outstanding time of 29:28.

That was actually only a second off his PB which was set in the City of Stirling 10k back in 2019. With an average pace of 4:44 minutes per mile it was a truly terrific display from Grant. On reflection, he was happy with how the race went, but he’d like to go even faster! 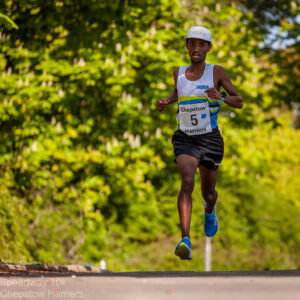 There was a group of very talented runners coming in just behind Grant, with Joshua Grace of Aldershot Farnham & District taking 3rd place in a time of 29:34.

Then it was Charlie Brisley of Newham & Essex Beagles in 4th, registering a time of 29:37 and Reece Edwards of Belgrave Harriers getting 5th in 29:40.

12 runners successfully got round in under 30 minutes which gives a good indication of the calibre of field they’d managed to assemble. 30 runners in total went under 31 minutes and 53 went sub-32-minutes. 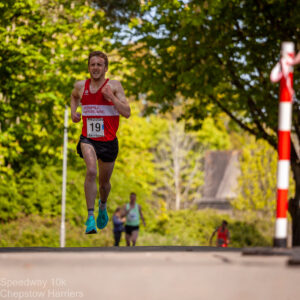 Despite the lack of competitive racing and the absence of any meaningful league fixtures, the running scene is still looking in a pretty healthy shape it would seem.

Jennifer Nesbitt of Cardiff AAC was 1st female, getting round in 33:20 to finish in 71st place overall. Then it was Chloe Richardson of Birchfield Harriers taking 2nd female spot in 34:26 coming in 91st overall. Michelle Pearson of Belgrave Harriers was 3rd female, completing the course in 34:46 which put her in 97th position overall. 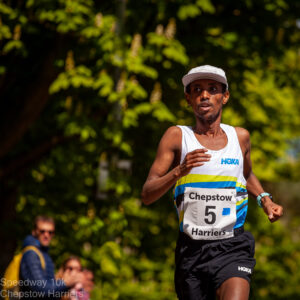 Omar Ahmed cruises home to seal the win in a time of 29:18

Triathlon season is getting underway now for Grant so he’ll have some exciting events to look forward to this summer, no doubt. And from a running perspective at least, he’s looking in fantastic shape it’s safe to say.

It was certainly great to see Rob and Grant both hitting their full potential in a proper race and that was hopefully a sign of great things to come from them.

Now he knows that the formula he’s using is working, Rob is going to continue doing what he’s doing and hopes to see more signs of progress in the summer events.