Signs are good for BAC at Vitality London 10,000 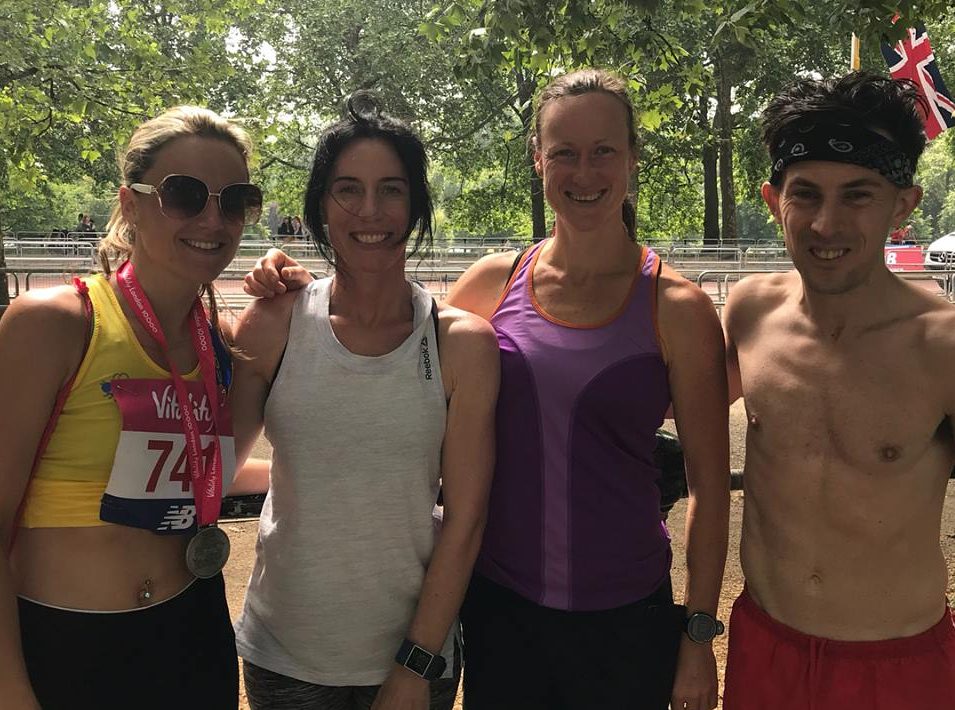 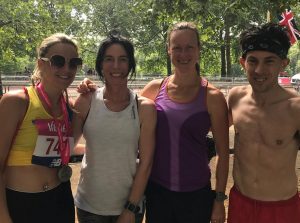 Harriet Slade, Mandy Adams, Joy Wright and Rob McTaggart were all in action at the Vitality London 10,000

Off the back of being awarded five free male and five free female entries to the Vitality London 10,000 for a no show at the Southern Road Relays, it would’ve been rude for Bournemouth AC not to fill at least some of those slots.

Having been on the lookout for a good 10k race to provide the platform for a potential PB assault, Rob McTaggart stepped up to the plate and offered to organise the entries for anyone wishing to participate.

Running in London has been quite a novelty for Tag recently, with the nation’s capital providing the venue for two of his best performances of the year.

Following up a huge a PB of 70:25 at The Big Half Marathon, Tag’s do-or-die display in the London Marathon earned him plenty of plaudits, as he was the first BAC member over the line, taking 31st place out of over 40,000 entrants with a time of 2:30:40.

Also lining up for BAC and making the most of the free entries in a race that ordinarily costs £33 were track superstars Harriet Slade, Joy Wright and road running stalwart Adrian Townsend. Mandy Adams and Jodie Sloane of Littledown Harriers also took up a place.

Having already entered the race previously, Trevor Elkins completed the line up for BAC. The Vitality 10,000 was a target race for Trevor and he’d invested a lot of time and hard training in the build up to this race.

Feeling in good form after banging out a 15:23 1500m  on the Saturday before the race, Tag was optimistic about his chances of getting close to the 32 minute barrier.

For the first 4.5k of the race he was going quite well but then a horrific bout of hay-fever got the better of him. That resulted in a woeful last 1.5km which probably cost him a sub 32.

In fact, it was so bad that he was on the roadside retching in the last kilometre and only managed to get going again when he saw Steph Twell approaching behind. At that point his instinct kicked in and he was able to persevere and save himself the indignity of getting ‘chicked’.

Despite all that, Tag still finished in an outstanding time of 32:32, which put him in 93rd place out of over 14,000 people who took to the start line.

With a plan to finish in the high 37’s, Trev was looking to set off at about 6:20 pace for the first mile and then aim for 6:10’s after that. Then if all was well he’d try and crack it up for the second 5k.

Unfortunately, his plan did not come into fruition on the day. He started off slowish, taking care not to set out too fast and risk burning himself out. He just couldn’t seem to get his legs to switch into gear though when he wanted to push on.

On top of that, his breathing was erratic, resulting in him stopping and walking after 3 or 4 miles. He got going again and managed to make it to the end but there would be no PB for Trevor on this occasion.

Registering a time of 39:23, Trevor came in 706th place. Although he was disappointed with his performance, he did appreciate the finisher’s medal he got afterwards. And he was able to find some solace in the fact that he finished within 10 minutes of Sir Mo Farah, who won the race in a time of 29:44. 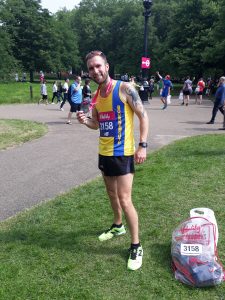 Although it wasn’t quite the performance Trevor Elkins was looking for, he did like the medal he was given afterwards

There seemed to be some issues with the starter pens in the race that did impact some of the runners in the early stages. It caused a few problems for Adrian Townsend and he felt he had a terrible first three miles as a result.

There seemed to be hundreds of slower runners ahead of him who clearly should have started much further back. That meant he got held up a fair bit as he attempted to weave his way through the field. There were a lot of similar complaints on the Facebook page after the race.

It was a shame because the course would have been very fast with a clear run. There were six different pens but that meant that over 2,000 runners would be in each pen. The pens perhaps needed to be divided up further to reflect the differing abilities of the runners that were mixed together. 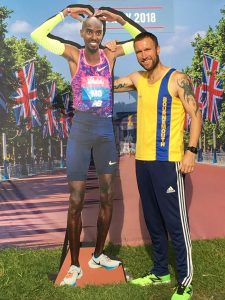 It didn’t say which pen number he was meant to be but Adrian started in the first one. He reckons that some of those right at the front of the first pen probably finished in about 45 minutes, so they should have been nowhere near the front at the start of the race. It was a bit of a shambles really.

Despite the tricky start, Adrian rallied well though, crossing the line in a time of 40:13, which put him in 834th place overall and 30th in the 50-54 age group. 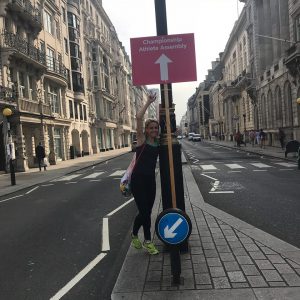 Making the most of her opportunity to mingle with the elite runners, Harriet Slade got to meet some of her athletic heroes before the race started, including Mo Farah and Jessica Ennis-Hill. Naturally of course, they were both star struck to meet Harriet and couldn’t wait to get a selfie with her.

When it came to the more serious business of the run itself though, Harriet wasn’t especially pleased with her performance. Being put in with the elites had meant she’d had to start a bit further forward that she perhaps should have been. 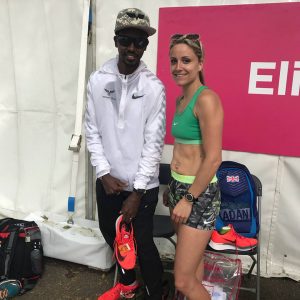 Friends in high places: Harriet shared a tent with a true idol of hers in Sir Mo Farah, who went on to win the race

In an effort to stay ahead of the chasers, Harriet ended up setting off a bit too quickly and she went through the 5k point in 20:19. This was perhaps a little too quick and she paid the price for that in the second half of the race as she’d effectively burnt herself out. Finishing in a time of 42:21, Harriet came in 1,187th overall and was 175th lady over the line.

Another BAC member who felt she had a poor run was Joy Wright. Recently injury and illness have hampered Joy’s training quite significantly. She’d also competed in the Westminster Mile the day before so that had taken quite a bit out of her.

Again, the Westminster Mile hadn’t gone as well as she would’ve hoped. Although she got to the 800m point in 2:37, she blew up before the finish and ended up coming in at 6:04. This was a little disappointing when you consider that Joy is a 61 to 62 minute 400m runner. 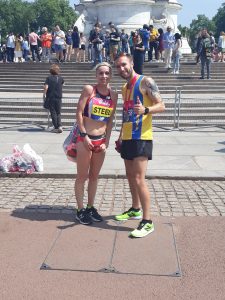 In the Vitality 10,000 though, despite not being in the best of form, Joy stayed determined and got the job done in the end. Crossing the line in a time of 46:28, Joy finished in 2,272nd place overall and 369th woman.

It was still good for Joy to get the mileage in the bag though and it will hopefully kick-start her journey toward improving her endurance, in particular speed endurance, which is imperative in the track season. 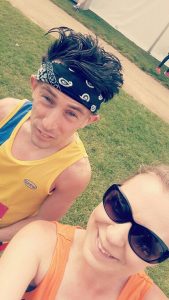 Despite perhaps not quite getting the times they were hoping for, all the BAC members enjoyed their morning in London and certainly had fun mixing it with some of the all-time greats of the sport. The Vitality 10,000 always delivers on atmosphere and the support you get out on the course is second to none. 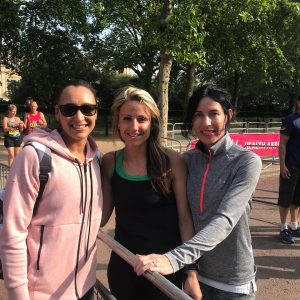