Simon Hearn heads up north for Chester Half Marathon 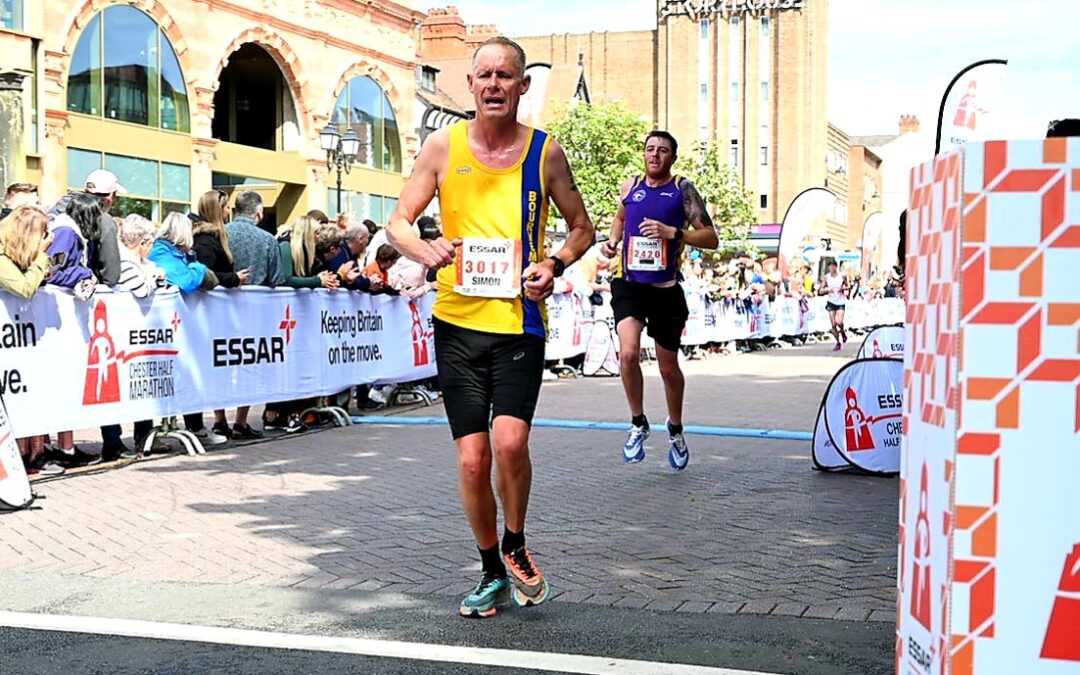 Always on the lookout for a flat, fast half marathon that he can train for and work towards, Simon Hearn‘s latest quest took him all the way up to Chester for one the UK’s longest established races of that distance.

The Essar Chester Half Marathon was in its 40th year and is thought to be one of the top domestic races out there, being based in a Roman and Medieval city steeped in history.

Starting out at Chester Racecourse, the route heads through the city centre before heading out into countryside. Then it heads through the picturesque villages of Mollington and Lea by Backford before looping round at Saughall. It then heads back towards the finish via the Garden Quarter before ending just outside the Town Hall and Cathedal, soaking up the rapturous applause of the hoards of spectators.

When he does these half marathon races, with a full block of training behind him, Simon usually attempts to throw down a new PB. After setting a brilliant new benchmark of 1:27:12 at the Cambridge Half Marathon in March, he  had left himself a tall order to be able to repeat or eclipse those heroics. But he’d worked hard in training and done everything he could to put himself in the best possible shape.

He had actually done the race before, back in 2016, but he’d forgotten that the course wasn’t fully flat and there were some inclines that would take it out of him, especially on the last mile where there was a fairly steep upward curve.

The last time he ran it Simon just managed to dip in under 1:30, completing the course in 1:29:56. At the time that was his quickest half marathon yet but he’d certainly progressed since then. 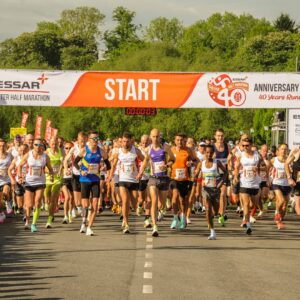 The 2022 Essar Chester Half Marathon gets underway

The weather was okay on the day of the race though and Simon was raring to go. There were quite a lot of runners compact into a right space at the start so it was tricky but he soon settled into his intended pace.

Although his fitness was pretty good, Simon’s legs felt a bit heavy. On the whole though, it was a very good run from Simon and he managed to get round in exactly 1 hour and 28 minutes. 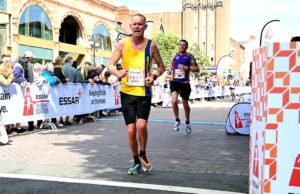 The race was won by Omar Ahmed who was, as usual, far too quick for any of his adversaries, completing the course in a blistering 1 hour 3 minutes and 52 seconds. That was almost four minutes quicker than his nearest rival which was Tom Merson of Exmouth Harriers. He got round in a still mightily quick time of 1:07:45.

There were 25 men finishing in under 1 hour 15 minutes, showing it was a pretty good standard race at the sharp end and 66 runners in total came in in under 1 hour 20 minutes.

Alice Braham of Ealing Eagles flew round in 1:18:03 to seal the first female spot and 49th place overall. Sophie Birtles was 2nd female in 1:18:21, putting her in 52nd place overall and Sarah Delderfield of Vale of Aylesbury took 3rd female in 1:18:50. That gave her in 55th position overall and was just enough to edge out Dacorum & Tring’s Kate Rennie who got round in 1:19:10 to take 59th place. 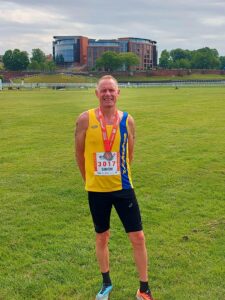 Even though it wasn’t a PB, Simon was still pleased with the result and it was another very quick half marathon to his name, proving that despite his age, he can still perform at a high level.

The weekend after Simon was back in action at the May 5 and after really enjoying that, he’s planning on doing some more league races going forward and perhaps some other small races over the summer.

For four days in August, he’ll be covering most of the South Downs Way on foot in an activity they call fastpacking. That means running and walking for most of the day, then pitching up a tent to sleep in over night. Then he’s hoping next year he’ll be able to fastpack all of Hadrian’s Wall.

For his next big running race target, Simon will be taking on the Bath Half Marathon in October and he’ll be switching his focus to that closer to the time and embarking on another solid block of training.