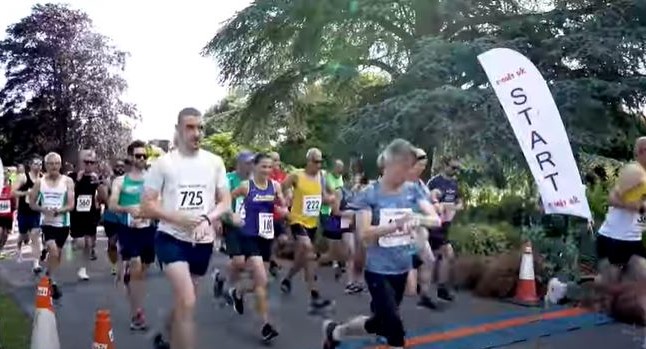 Providing a nice juxtaposition of scenic countryside and coastal lookouts, the Exbury Gardens 10k enticed 862 runners over to its New Forest location. One of them was Bournemouth AC veteran Simon Hunt and he was joined in the race by both his wife Marilyn and his daughter.

It was Simon’s first 10k since Boscombe at the end of November. On that freezing cold morning he got round in 47:21. Since then he’d been doing Moors Valley parkrun most weekends and his last race was the May 5 in Canford Heath.

It was the first time since 2016 that the Exbury Gardens 10k had been held and the race was first introduced in March 2008. The 2022 participants were met with sunny but windy conditions as they took to the start line ready to give it their all.

Entry to the gardens was included in the price, as was a t-shirt for all finishers so it was very good value. The start of the race was delayed by 15 minutes though, due to parking problems.

Once they got going though, the runners embarked upon scenic loop through the gardens before heading out through Exbury village and downhill toward Lepe Country Park. When going in that direction they had the wind behind them which was handy.

Then at Lepe they made a U-turn meaning they were running uphill for a short section into the wind before being sheltered by the trees. From there it was a fairly flat run back into the gardens.

Starting off with a 7 minute mile, Simon then followed it up with a 7:33 and then a 7:08 to bring him through the first 5k. The second half of the race was tougher though as it contained more uphill.

Simon managed to stay fairly strong though, producing a 7:35 for the fourth mile and a 7:36 for the fifth mile. Ending the race with a 7:41 for the final mile, he was then almost at the finish.

Completing the course in 46:41, Simon was placed 93rd in the overall standings and he was 4th in the Male Vet 60-69 category. That a decent result for Simon and he was happy with the outcome. His wife and daughter were also pleased with their times as well so all-in-all it was a good day for the Hunt household.

Timothy Annets of Hardley Runners was the winner of the race, crossing the line in 34:15, which was enough to give him a 10 second advantage over Thomas Stevens who was 2nd in 34:25. Dave Hunt of Ryde Harriers was 3rd in a still very good time of 35:08.