Steve Way, Simon Hunt and Matt du Cros take the plunge at the Bath Half Marathon 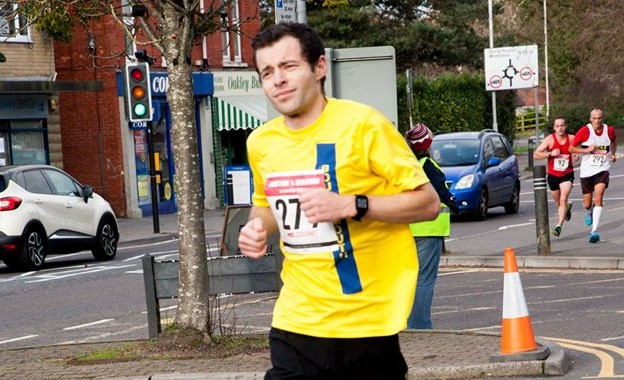 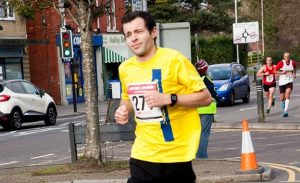 Taking on his first half marathon in two years, Matt du Cros was one of three Bournemouth AC members giving the Bath Half Marathon a whirl, along with Steve Way and Simon Hunt

Hoping for a good clean race, there were three Bournemouth AC members present at the 2019 edition of the Bath Half Marathon and they were Steve Way, Matt du Cros and Simon Hunt.

The prospect of a fast, flat course and nigh on perfect running conditions had them foaming at the mouth as they took to the start line for one of the longest established and most iconic city centre road races in the country.

There were almost 15,000 runners taking to the tarmac and an estimated 40,000 spectators lining the streets of Bath to witness the 38th edition of the popular and much-loved event. It truly was quite a sight to behold. 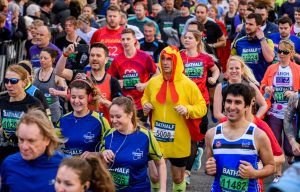 The Bournemouth AC trio were among over 14,900 people who did not chicken out of tackling the Bath Half Marathon

After some indifferent performances of late, Steve Way was hoping to make a splash and get the result he needed to give him a boost for the continuation of his training for the Comrades.

Two weeks prior to the Bath Half Marathon, Steve had been in action at the Wimborne 20, where he finished in 3rd place with a time of 2:02:08. Most people would have been over the moon with that of course but Steve sets such high standards for himself that he wasn’t really happy with the run.

At the Bournemouth 10 he finished 4th in an event that he won convincingly last year and at the Lytchett 10 two weeks earlier he ran the course two times before the race even began, completing his third lap in the actual race.

He did record a victory in the Blackmore Vale Half Marathon in early February, but again, wasn’t wholly happy with how he felt during the run. 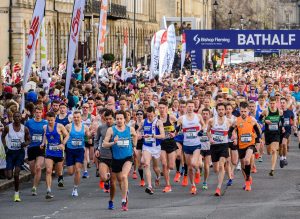 The race gets underway, with Chris Thompson (number 3), the hot favourite, already out in front

Taking on his first ever 10 mile races at the Lytchett 10 and Bournemouth 10, Matt Du Cros did well in both events and was hoping he had all his ducks lined up for a successful half marathon.

The last time he’d run a half marathon though was back in 2017 and he wasn’t quite at the level he is now back then so he knew the chances are he’d be recording a new PB at least, whatever happened.

As for Simon Hunt, he hasn’t managed to make it to training much recently but he was hoping he would be able to tap into his experience to see him through to a decent time. 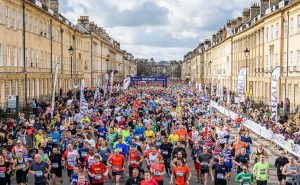 The masses go over line to get their half marathon race underway, providing quite a spectacle

Although he hadn’t quite make the waves he wanted, it was still a good solid performance from Steve finishing the race in a time of 1:12:09. That was enough to give him 31st position and 4th in the M40-44 category.

With an average pace of 5:29 for the run, although it wasn’t quite what he was looking for, it was still an impressive display and one that most runners would look at in awe. 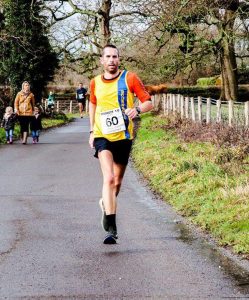 Steve went over the line in 31st place, clocking an excellent time of 1:12:09

Completing the first 5k in 20:21, Matt passed through the 10k stage at 40:23. That was a really good first half of the race. The challenge would be to keep it going throughout the second half.

Crossing the line in a time of 1 hour 26 minutes exactly, Matt took 373rd position, which wasn’t bad at all out of nearly 15,000 participants. It was also a PB that he could most certainly be proud of and will surely be the springboard for greater things to come for Matt. 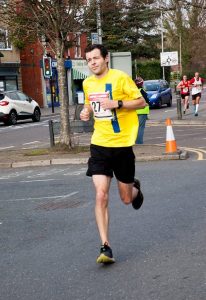 Matt had a very good run, reaching the finish in a chip time of exactly 1 hour 26 minutes

Unfortunately, Simon Hunt’s race didn’t quite go so well. It started off quite smoothly for Simon though and he went through 5k in 22:33. He then reached the 10k point in 45:43, only really losing a bit of ground in the fourth mile.

Before he could get to the 15k point though, his calf muscle went and from that point on, it was a long painful limp home. In fact, he was forced to stop on the 10th mile, which took him over 24 minutes to complete.

Although he considered pulling the plug on it, to his credit, Simon didn’t throw the baby out of the bath water and give up. He pushed through the pain over the last three miles to make it to the end in a time of 2:02:01. That landed him in 4,842nd place overall and 72nd out of 209 in the M60-64 category. 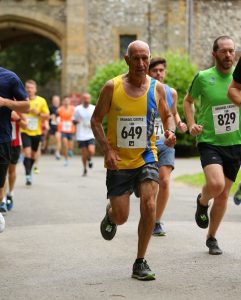 It was gutting for the race to end that way for Simon, especially since it was going so well up till that point. As soon as he felt his calf go though, he had that sinking feeling, knowing that that was it. That’s running for you though. There is always that risk that an injury can strike at the wrong time and scupper your race. 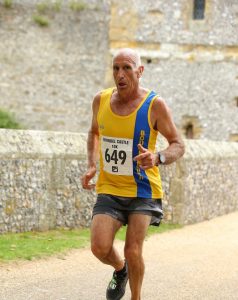 After stopping for a bit to nurse his injury, Simon refused to give up and battled on to complete the race

As for the ladies race, it was Kate Reed who swooped in for the win, finishing in a time of 1:12:44, which put her in 34th place overall, only three places behind Steve.

2nd place in the women’s race went to Rachel Felton of Shaftesbury Barnet who finished in a time of 1:15:53, putting her in 73rd place overall. Then it was Phillipa Williams of Bristol University who completed the course in a time of 1:18:10 to put her in 103rd overall.

Steve will be in racing action again pretty soon as he is set to take on the Manchester Marathon. That will really be just another training run for Steve though, as opposed to one he’s specifically targeted for a fast time. He’ll still be hoping for a good performance though to confirm that his training is on track to get him to where he wants to be.

As for Matt, he’s looking to run the North Dorset Village Marathon in early May and that will be his first marathon since 2016 so he will soon be stepping up his training in a bid to get into peak shape for that race. 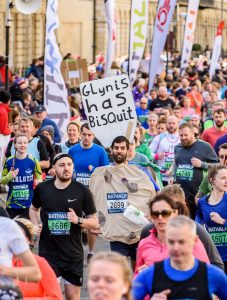 This outfit really takes the biscuit