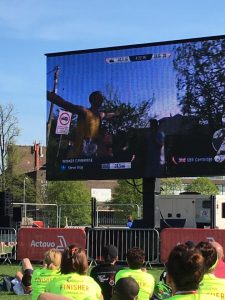 Well, Steve Way certainly had an interesting day on Sunday 8 May! Steve took part in the Wings For Life World Run, a global event in which all the competitors in all the 34 participating countries start at exactly the same time, and 30 minutes later a car sets off in pursuit. As each competitor is caught, he or she is eliminated, and the last to be caught is the winner. The UK race took place in the Cambridge area, and the car driver was none other than David Coulthard. Steve set off in fine style, and by 10 miles had the lead. He passed marathon distance in 2 hours 37 minutes, by which time the heat was making the going rather difficult, by 38 miles (yes, 38 miles!) Steve learnt he was the last man standing, the excuse to slow down and wait for the car which duly arrived and, as Steve says, he has “never been so happy to see David Coulthard in my life”. The underlying purpose of the event is to raise money for spinal cord injury research, so, quite apart from the amazing achievement of being the UK winner, Steve‘s exertions, about which you can read more at www.steveway.co.uk, were well worthwhile! 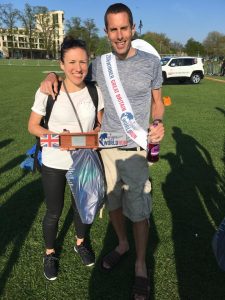 More photographs of the Wings for Life below…………………

The second Invictus Games are taking place this week in Orlando, Florida.  Prince Harry is the driving force behind the conception of the games, which are for physically and mentally injured service men and women from around the world to compete for their countries.  Luke Sinnott, who is a member of Bournemouth Athletic Club, lost both his legs and almost lost one of his arms to an IED whilst serving with the British Army in Afghanistan just over five years ago.  Luke was our special guest at the Presentation Evening in November, and the story of his recovery and his determination not to be defeated by what had happened, and to make the most of his new situation, was truly inspiring.  Luke literally ‘launched’ himself into sailing, but also became involved in athletics, and is often at the Kings Park track where he is being coached by Brian Camp.  Against very strong competition, Luke gained selection for the GB team at the Invictus Games, and is, as this is being written, in Orlando, and was to be seen on the BBC on Monday being interviewed by Gabby Logan and Ade Adepitan along with Prince Harry!  We wish Luke and the team every success at the games, and it seems likely that Luke will be in Rio for the Paralympic Games this summer.

The British Athletics League season opened on Saturday 7 May, with the BAC team competing in Cornwall.  BAC is in National Division 3, which consists of eight teams (there are four National Divisions).  The results for the Cornwall fixture have not yet been published, so PLEASE COME BACK as this report will be updated when this has been done.  At present, it appears that BAC finished 4th or 5th, not bad,  but Team Manager Tim Hughes will be looking for the strongest possible team to compete at the next fixture at Chelmsford on 4 June. 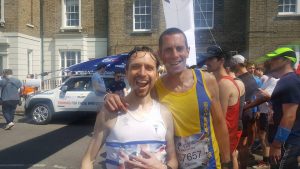 At the start with the 3rd overall UK Charlie Wartnaby 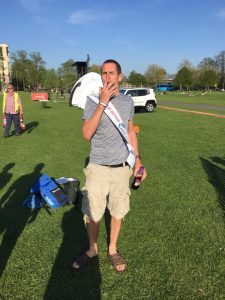