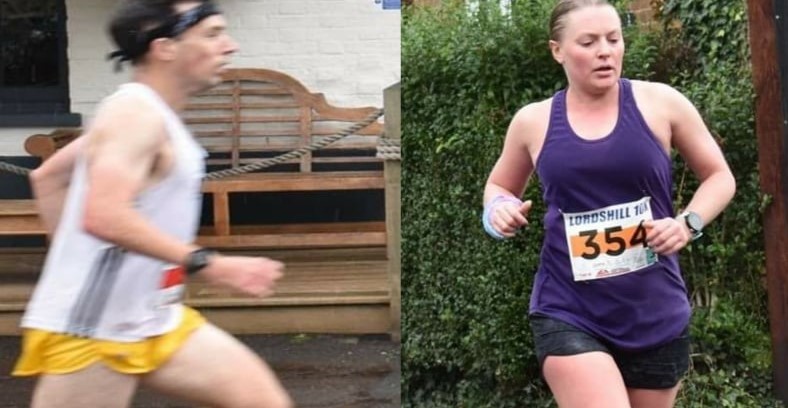 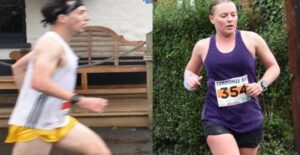 Just a few days after a fabulous 5k at Battersea, Rob McTaggart made the short journey to Southampton with Nikki Whittaker to compete in the Lordshill 10k

Located on the outskirts of Southampton, the Oasis Academy was actually quite a quite  a convenient venue to get to for a Bournemouth AC runner, as Rob McTaggart and Nikki Whittaker found when they checked in for the Lordshill 10k.

Having not raced on the road since November 2019, it had been a while for Nikki so it would be a good opportunity for her to gage where her fitness is right now. It was a year-and-a-half since she’d raced a 10k as well it was going to be interesting to see what kind of performance she could produce.

After suffering a dip in form which saw him clock a disappointing 36 minute 10k at Eastleigh and get taken to task by Matt Brown in the Upton Summer Series, Tag had managed to find his fast feet again.

On the Thursday before the Lordshill 10k, he competed in the Friday Night Under the Lights 5k at Battersea Park. It was an event purely aimed at very fast club runners, giving them a chance to go hammer and tong over a very quick course.

Opening with a very quick first mile of 4:49, Tag wasn’t quite able to maintain such ferocious speeds over the remainder of the run but he was still very strong. Recording a 5:01 for the second mile and a 5:08 for the third mile, he made it to the finish line in a superb time of 15:33, giving him an average pace of 4:59.

It was the fastest time he’d run for a 5k off the track so it was cracking result for Tag and firmly announced his arrival back into top form. Incredibly, the standard of the field was so high though that only saw him finish in 55th place out of the 150 runners who took part.

The winning time on the night went to Sayed Taha Ghafari of Highgate who got round in an astoundingly quick 14:18. In fact, 26 of the athletes there got under 15 minutes, proving that the talent on display was spectacular.

It didn’t really leave Tag much time to recover though before competing at Lordshill three days later. The course for the Lordshill 10k was an out and back some slight downhill over the first 2.5 miles and a couple of inclines over the last 2.5 miles. 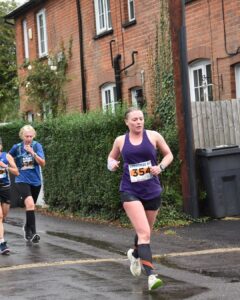 The conditions were quite cool on the day which suited Nikki well, although there was a bit of drizzle. Getting through the first 5k in 26:40, Nikki then followed that up with a 26:31 for the second 5k, so she’d managed a negative split despite the inclines towards the end. 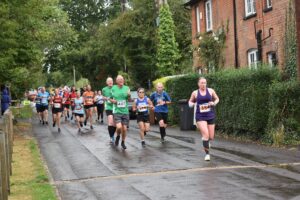 That gave her a finishing time of 53:11 which put her in 295th place overall out of a 450 strong field. She was 85th fastest female out of 183 so all-in-all it was a pretty decent run from her and she was happy with the time. 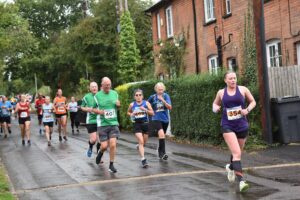 Nikki was pleased with her finishing time of 53:11

It was Richard Waldron of Southampton who had taken control of the race and Tag was with Sebastian Hoenig of Lordshill Road Runners and Ben Saunby of City of Salisbury up until the 7km point. 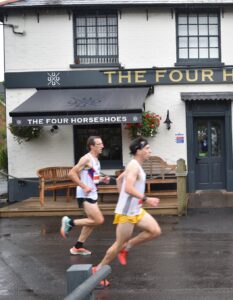 He then lost a few metres to them and was unable to get it back over the remainder of the race. The incline over the last mile didn’t really play to his strengths and the fact that he hadn’t fully recovered from his 5k exploits didn’t help. 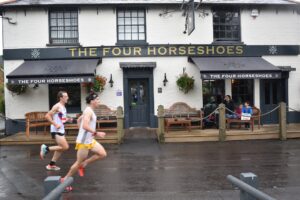 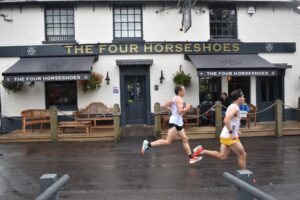 Sarah Sheddon of Winchester & District was first female, taking 54th place overall with her time of 39:16. Bernadette Versey of Lordshill was 2nd woman and 68th overall in 40:02, just edging out Alice Burch of Totton who was next over the line in 40:08.

A face some Bournemouth AC runners will recognise from the Tuesday training nights, Christy Murphy also ran the race. Representing New Forest Runners, he completed the course in a time of 40:14. 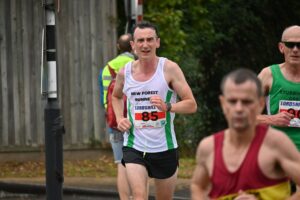 Christy Murphy, who sometimes trains with BAC, was also in action at the Lordshill 10k

Tag will now turn his attentions to the Great South Run which is just around the corner. He’ll be hoping to record a quick time there over the fast, flat, 10 mile route around Southsea and if his run at Battersea is anything to go by, he could well produce something special.