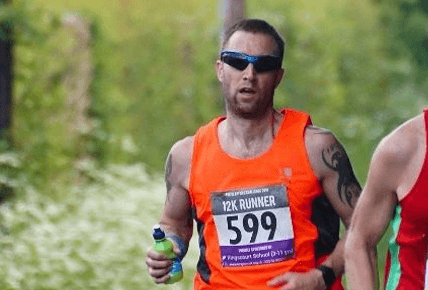 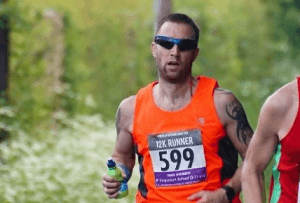 In the midst of several weeks of back-to-back races, Trevor Elkins was again in action, this time taking on the Clanfield Challenge 12k. It followed two consecutive victories for Trevor, after he claimed 1st place in the Race The Tide Beach Race in Bournemouth and the Run the River 15k in Bristol. He was now going for a hat-trick of wins but, with a very competitive field, it was always going to be a tough ask at the Clanfield Challenge.

The course begins on North Lane and climbs steadily up onto the South Downs Way toward the old HMS Mercury site. It then loops round towards North Wood and back into Clanfield for the finish in front of the crowds that congregate at the meadow. The terrain is primarily trail, providing some testing surfaces under foot.

When the race got going, Trevor started off in the pack whilst many others bolted to the front. He kept the leaders within catching distance of 100 to 200 metres. The first two miles were uphill so he felt sure the leaders were going to run out of steam.

Once he’d got to the top of the hill he began to pick people off, one by one. His legs felt good after a couple of days rest. The was a guy from Hatch Warren who kept putting in little surges. He seemed quite powerful but Trevor managed to get passed him whilst going up another hill. 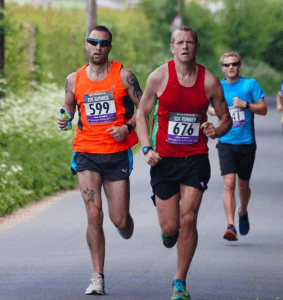 He then caught up with Lee Mawson of Denmead who was in 4th. He tracked him until they got to a water station where Lee stopped and downed a cup of water. He then bolted past Trevor and Trev thought surely he was going to get cramp going at that speed with a a belly full of water.

Managing to latch onto the back of him, Trev tucked in behind and waited to pounce. However, Lee seemed to just keep on speeding up, kilometre after kilometre, as attempted to shake Trevor off.

The pair fought hard as the race went on and they were going so quickly that they caught up James Tueten of all the names and blitzed past him on a downhill section.

It didn’t seem that Lee was going to let up so with a mile to go, Trevor decided to let him go and settle for 4th place. That meant that Lee got the final podium position and trophy. Trevor arrived at the finish line in a time of 49:36, just 26 seconds behind Lee.

There were around 12 to 15 good club runners in the 12k race so Trevor was proud to finish 4th in such a competitive line up, finishing in front of some 16 minute parkrunners. He even threw a sub-6 minute mile in on mile four, so there certainly a lot of positives to take from the race. That teed Trevor up nicely for an assault on his next big race, which was the Vitality 10,000.

Trev was happy to take 4th place in the end, crossing the line in a time of 49:36