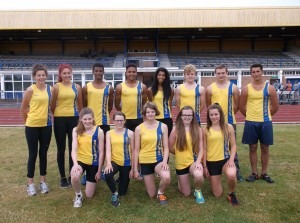 The club would like to offer its congratulations to 11 of its athletes selected to compete for their counties at the English Schools Athletics Championships to be held on 11th and 12th July 2014 in Birmingham.

Although thirteen athletes from BAC attained the qualification standard for their discipline, the number of athletes Dorset Schools can take is capped at 25. Therefore only ten were selected from BAC, along with one for Hampshire Schools.

The ten BAC athletes selected for Dorset are:

Iona Sheerin has also been selected to represent Hampshire Schools for the junior girls 75m hurdles.

Two other BAC athletes gained the qualification standard, and although not in the Dorset team, deserve recognition for their achievements. They are Izzy Wedderburn (Junior Girls – Long Jump) and Samantha Cash (Inter Girls – Triple Jump).

The English Schools competition has been running since the 1920s, and for BAC to have had so many of its athletes selected to compete is considered by many to be a record in living memory. For those unfamiliar with it, the two-day competition is the largest of its kind, with many athletes from all over the country representing their county.

The club wishes its athletes the very best of luck, and with such a strong team going, we are hopeful of some great results!