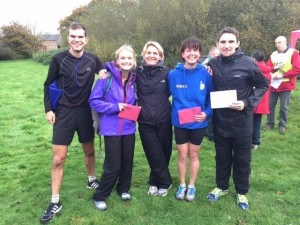 This might be the appropriate time to round up the BAC positions in the Dorset Road Race League for 2014.  This has been an incredibly successful year for the club, with team and individual awards due to be presented at The Junction Leisure Centre after the Broadstone Quarter on 1 January 2015 – make sure you’re there!!  We all expected the men to do well, and would have been disappointed otherwise, but what has been remarkable this year has been the renascence of our ladies’ team, who, from seemingly nowhere, in 2013 appeared in strength to top Division 2 and earn promotion to Division 1.  Then, not only do they consolidate their position in the top division, they go on to win it!  The foundation of the team, racing regularly, has been Nikki Sandell, Gemma Bragg and Caroline Rowley, backed up by (as they say on ‘Strictly’ – in no particular order) Emma Dews, Helen Ambrosen, Janie Chapman and Cherry Sheffrin, with recently joined Heidi Tregenza showing her ability in cross-country, but yet to race on the road in a BAC vest.  In addition, Caroline is the only BAC athlete to win the Fidelity Award for competing in all 12 League races, which is quite an achievement considering the commitment involved.  For the men, Jon Sharkey and Simon Munro having been competing for the first individual spot, just taken by Jon with Simon close behind in second. Another award worthy of note is Paul Hill‘s win in the 21/24 age category, considering nearly all Paul‘s League races have been just after Parkruns or just before or after a marathon, etc.!  So, in addition to Division 1 wins for both BAC Mens‘ and Ladies‘ teams, the individual DRRL awards are as follows:

The recent Parkruns have produced some BAC winners and PBs.  On 15 November, at Bournemouth, Paul Hill won (for the second time!) with a PB, but then reverted to his customary (!) 2nd position on 29 November, having been 3rd on 22 November.  Also running PBs on 15 November were Brandon Meredith, Sebastian Hearn and Alison Humphrey (Alison‘s PB was, of course, for this event; in earlier years, as Alison Barnes, Alison ran quicker than most people over this and other distances!).  At Poole on 29 November, Jez Bragg ran his first Parkrun to finish 3rd, closely followed in 4th by Simon Way, and the week before, 22 November, the Poole Parkrun was won by Jon Sharkey. 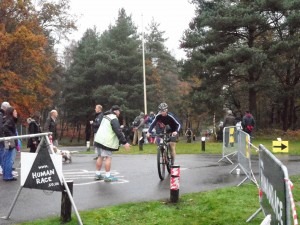 Maybe not actually road running, but it’s worth mentioning Ross Smith‘s exploits in off-road duathlons.  On 16 November Ross was 8th of 152 finishers in an extremely muddy Cirencester Duathlon, which consisted of a 2 mile run, 10 mile bike and 2 mile run.  Even more impressive was Ross‘ 4th position of 233 at Ashvale Ranges the following Saturday, 22 November, consisting of a 10k run, 18k bike and 5k run which Ross completed in 2.05.38.  Ross describes the event as extremely hilly and tough but he says it was a great race and he felt good (BAC training?!), and Ross‘ excellent position is more remarkable considering he had a tumble at 3 miles into the first run, tearing a small muscle, which resulted in slight swelling to his leg by the finish.  So most of the race must have been undertaken with some pain – well done!