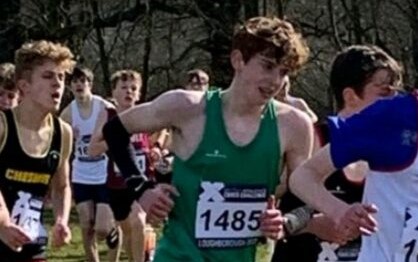 A dozen BAC athletes made the long journey to Prestwold Hall, near Loughborough, to compete for Dorset (and Hampshire) on Saturday 12 March at the UK Inter Counties Cross Country Challenge, a prestigious event which at one time attracted live television.  Many comments about the course refer to mud and hills – quite right for cross country!  Dorset County was well represented, fielding full teams and more in almost every age category, male and female, quite an achievement for such a small county, with many BAC athletes scoring for their county team (the first four to count), and others providing the essential back up should anything go wrong.

As is only to be expected considering the competition encompassed all the counties of England, Scotland and Wales, the larger counties, with many more athletes, tended to lead the results tables, with the smaller counties much further down. Despite that though, the county of Dorset, and the BAC members representing them were there, so congratulations to everyone who travelled all the way to Loughborough. It is worth noting that many, many counties did not have sufficient athletes to make up a team in a lot of the races. 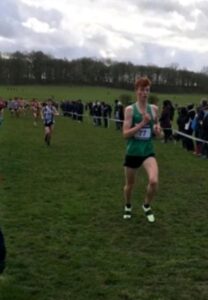 Ollie James leading the way for the Dorset team

Josh Cole was the first Dorset athlete in the senior men’s race.  It was a bit surprising to see Josh‘s position (122nd of 289) as we all know what a quality athlete Josh is, but Josh said of the race “Felt good. Bit shocked at the position but quick research on who was around me shows I was mixing it up with some quality athletes.  Can’t wait to come back next year”.

Ollie James was also the first Dorset athlete in his race, U20 men.  Ollie was a remarkable 29th of a field of 176 and said “Felt really very happy with that”.  And rightly so!  Dorset did have an U20 men’s team and although the team was last of 22 teams many counties did not have a team at all. Also part of Dorset‘s team was Theo Weaver and he was the third scorer for the county.

Hugo Richardson also counted for his county in the U15 boys’ race.  Hugo said about his race “Bit of a shambles, fell over at the start and got spiked.  2nd for Dorset.  More work over the next few weeks will be back stronger”.  Falling over and getting spiked is all part of cross country running!  Also running in this race (for Hampshire) was Oscar Newbery, whose comments were “Had to run 2.5k with only one shoe!  Pretty annoying but felt a lot stronger than the Nationals.  Happy knowing there’s room for improvement”.

Harry Butcher was another BAC athlete who was first for his county.  In a field of 290 Harry’s position of 149, about halfway, was an excellent result in a competition of this standard (as Josh‘s comment above confirms!).  Other BAC athletes who scored for Dorset were Emily Coltman, 4th Dorset U15 girl (with Imogen Gent 7th Dorset, providing the essential back up), Martha Preece, 3rd Dorset U17 woman, Massimo Lawson, 2nd Dorset U17 man and Elissa Clark, 4th Dorset senior woman.  In the U15 boys’ race, Nathan Mearns was 6th Dorset athlete, indispensably there should anything have gone wrong. 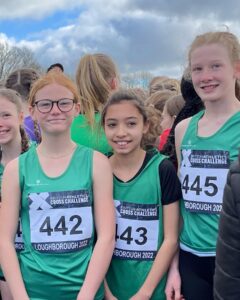 Esmee Hurst Atkins, Alba O’Brien and Seni Purnell line up in the Under 13 Girls race

The U13 girls’ race featured three BAC members with Seni Purnell taking 50th place out of 301 runners to finish as Dorset‘s 2nd scorer. Alba O’Brien was 4th scorer for the county and Esmee Hurst Atkins was 6th Dorset runner over the line. 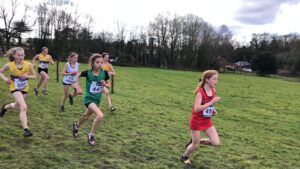 This report has been compiled after going through all the results of the competition, so sincere apologies to anyone who may have been inadvertently missed. 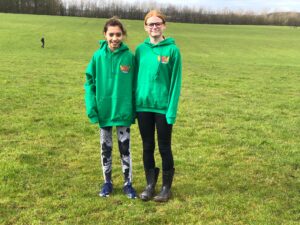 Alba and Esmee did themselves, their county and their club proud