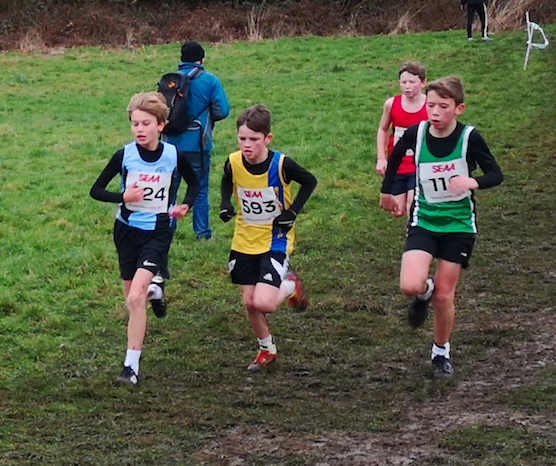 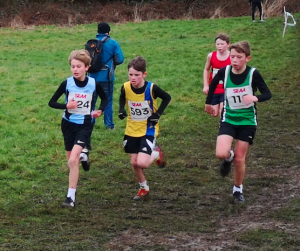 Louie Todd was one of six Bournemouth AC members competing at the South of England AA Cross Country Championships at Parliament Hill, five of whom were from the youth development squad

On what is perhaps the toughest and most brutal cross country course in the country, no fewer than five Bournemouth AC members from the youth development squads were bold enough to make the daunting trip over to Parliament Hill and lace up their spikes for the South of England AA Cross Country Championships.

In the Under 13 Girls race, both Martha Preece and Neve East were in action for the yellow and blues, whilst Lauren East went in the Under 17 Girls category. Louie Todd competed in the Under 13 Boys division, with his brother Jasper Todd flying the flag in the Under 15 Boys race.

There was also room for one big kid amongst the line up, with Rob McTaggart pitting his wits against the region’s finest  in the Senior Men‘s race.

Under the expert stewardship of Tom Cochrane and Simon Hearn, the BAC junior athletes have really been flourishing of late and the hard work they have been putting in in training is clearly paying dividends.

The juniors participate in track sessions on Tuesday and Thursday evenings and as a bonus session, Simon has been running a training group over at Hengistbury Head on Sunday mornings where they practice hills.

Those additional hill sessions would have certainly helped in the South of England AA Championships as Parliament Hill is renowned for its extreme inclines and undulating profile throughout.

As is always the case at Parliament Hill, the mud was thick and it must have felt like wading through treacle at times for the athletes as they trudged round their respective routes, jostling for position in much larger fields than they would ordinarily be used to.

Continuing her fantastic recent run of results, Neve East had another outstanding performance to finish in 24th place out of 316 in the Under 13 Girls race. Recording a time of 13:03 for the 3k course, Neve finished less than a minute behind the race winner Ruby Vinton of Ipswich Harriers. 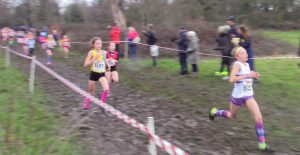 Neve East, in her trademark pink socks, glides across the mud with an eloquent ease as she races toward a lofty 34th place finish

Considering she was up against the best young girls in the South of England, it was a remarkable achievement from Neve in what has been a truly magnificent season.

She also won the Dorset County Championships for the Under 13 Girls at Bryanston School a couple of weeks before Christmas.

Also running an excellent race in the Under 13 Girls category was Martha Preece, who crossed the line in 90th place in a time of 13:52, so again, well up the field despite the high standard of the opposition. 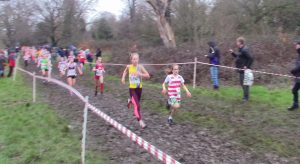 Martha has also had a cracking season on the cross country circuit and was part of the same Dorset team as Neve that took 3rd place at the South West Inter Counties, finishing in a highly impressive 19th place that day.

Taking 5th position in the Under 13 Girls category in the Wessex League Cross Country this season, it`s clear to see that Martha has a bright future ahead of her.

On top of that, she was also 4th in the Dorset County Championships and regularly finished high up the pecking order in the Hampshire Cross Country League fixtures.

Meanwhile, back at the South of England AA Champs, the Under 17 Girls had a 5k route to contend with and Neve’s sister Lauren East featured in that race for Bournemouth AC.

She came in in a very creditable 97th place in a field of 176, which was a decent result for Lauren, especially considering that she was up against the best that the South of England has to offer. Lauren`s time was a very solid 22:51. 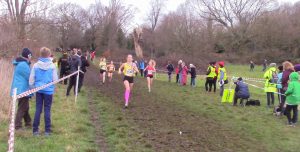 There have been many positive results for Lauren over the numerous cross country fixtures she’s taken part in this season and finishing 26th in the South West Inter Counties could well be one of the highlights. She also finished 10th in the last Hampshire League Cross Country fixture at Prospect Park in Reading.

As for the boys, it was Louie Todd wearing the famous yellow and blue in the Under 13 race, which was also 3 kilometres in length. He gave it everything he’s got, securing 257th place out of the 330 who took part and clocking a superb time of 14:06.

Having also competed in a number of the Hampshire League and Wessex League Cross Country fixtures over the course of the season, Louie has shown great enthusiasm to get involved, as has his brother Jasper, who featured in the Under 15 Boys race at the South of England AA Champs.

Demonstrating the terrific talent he has in his armory, Jasper Todd was 34th over the line, completing the 4.5k course in a staggeringly quick time of 16:18. That was out of a field of 296.

Jasper’s achievements for the season so far include a 10th place finish in the South West Inter Counties where he was part of a Dorset team that took 3rd place in the Under 15 Boys category.

Also winning a gold medal in the Dorset County Championships at Bryanston School, this would have to go down as an extremely successful season from Jasper’s perspective.

Finishing just outside the top ten in a couple of the Hampshire League Cross Country fixtures, Jasper also took 2nd place in the Wessex League race at Lytchett School back in October. 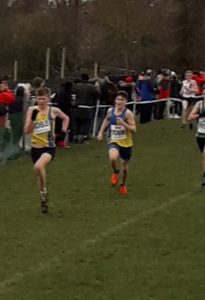 Jasper Todd, to the left of the picture, had a terrific run, putting the hill training he`d been given to great effect in the Under 15 Boys race

Going along to support the juniors that he coaches, Simon Hearn was extremely proud of their efforts at the South of England AA Championships and was thrilled to see them all performing so well.

In fact the junior athletes deserve a lot of recognition for all the hard work they’ve put in over the season and there’s certainly no doubt that these bright prospects are putting Bournemouth AC on the map when it comes to the youth athletics scene.

Also in action for Bournemouth AC in the Senior Men`s race was Rob McTaggart, who has been involved in some pretty raucous races at Parliament Hill over the years. 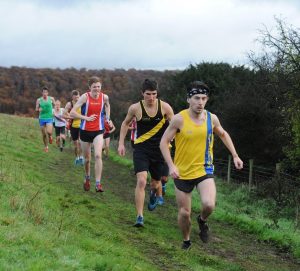 Very few of those races have gone by without incident though and this one was no different. Tag found himself face down in the mud on a couple of occasions, once just 600m into the race and the second time at around 4km.

He rallied well though did his best to move through the field and make up for any lost ground. Although he had a couple of bad patches on the muddier sections, he was very satisfied with his performance and even managed a decent sprint finish at the end to take 87th place.

That was a mightily impressive result in a huge field of 1,154 men and of course, being the South of England Championships, the standard of the competitors he was up against was extremely high.

Completing the brutal 15 kilometre course in a time of 51 minutes and 15 seconds, it was certainly one of his best cross country performances to date and demonstrates how he often manages to raise his game in the most challenging of races, and in particular, those where the stakes are notably high.