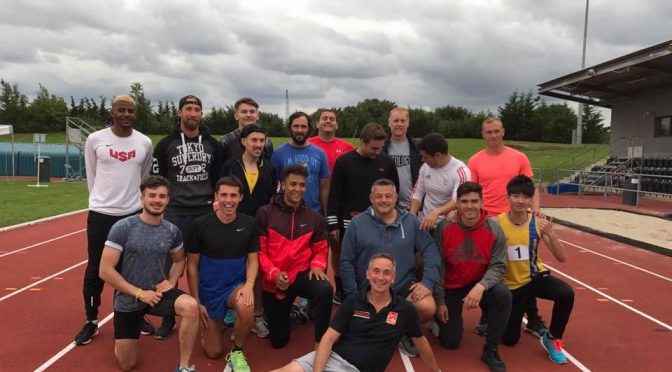 The men’s BAL Team set another all time high position as they finished second in the final BAL match of the season at Lee Valley, London.  This places the club third in the Division 2 table, yet again achieving a highest ever finishing position.  In achieving this the club also narrowly missed out on promotion having gone to the match ready to fight against relegation. This now places BAC well above some well established BAL teams and with a strong aspiration for promotion next season.

Stunning double wins in the field events from Patrick Sylla and James Lelliott in the Long Jump,  Alex Cox and Cameron Hale in the High Jump plus Dan Brunsden and James Lelliott in the Discus.  Other field wins were for Patrick Sylla (Triple Jump B), with Lelliott just missing out on winning the A string,  and also a win for Andrew Brown (Javelin B).  High scoring too were the pairing of Dan Brunsden and Andrew Sheerin, both finishing 3rd in their Hammer A and B events.

On the track, the athletes battled hard in some very competitive races.  Notable performances from David Long and Rob McTaggart finishing 2nd and 3rd in their 5000m races.  Lelliott finished 2nd in a fast 100m B race.  A welcome return to the track for Yiu Man Wong and Josh Nevin who both gained valuable points for BAC in the 400m Hurdles.  Nevin then later joined Roy Long in the Steeplechase.  An extremely tight 800m A race saw Lewis Sainval lunge for the line and narrowly miss out on a new PB.  Jamie Grose and Rob McTaggart, both doubling up, scored well in the 1500m, McTaggart 3rd in the B race.  Kev Hodgson and Muiris Egan went out hard in their 400m races which proved very tough.  Ryan Markam made a BAL debut in the 200m and 4×100 relay, the latter joined by Egan, Hale and Sylla.

A strong quartet of Egan, Hodgson, Lelliott and Sainval hit out a hard 4x400m at the end of the afternoon, finishing a decent 4th and in a time of 3:24.56, the fastest by BAC for some years.

Team Manager Tim Hughes was once again delighted with the team’s performance.  “We had a good motivational warm-up on the coach just before we went into the arena.  Every athlete knew that they had to do their utmost to get every point they could in what started off to be an anti-relegation battle.  I have never seen such enthusiasm both by our athletes competing and also the remainder of the team cheering them on.  This is what makes our team rather unique in the BAL – we certainly have an enthusiastic presence at these events with lots of camaraderie!  The guys have been fantastic this year and were a joy to manage”.

Looking forward to next season Hughes commented “We narrowly missed out on promotion this year, in fact pretty much by only one league point in the end.  Coming so close, and seeing some tight matches in rounds 2 and 3 where we just missed out on higher placed finishes, we have to believe that we can gain promotion next year.  We can see the events we need to improve in and I shall be on a recruitment drive in the coming weeks to give our team a boost for next season.  I wish the lads well for any end of season competitions and in their winter preparation for next BAL season”.