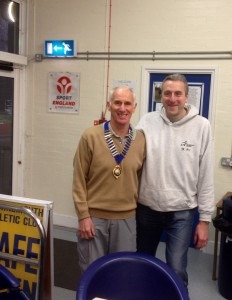 (Ian Graham writes………………….)
“I was honoured to receive the Chain of Office of President of Bournemouth Athletic Club from Brian Johnson at the club’s AGM on Thursday 19 March 2015. I will do my best to serve the club, of which I am very proud, having been a member for 29 years, as its President. Brian has been a member for much, much longer, competing very effectively in earlier years as a hurdler, following which he obtained high level Coaching and Officials qualifications which have been put to good use for the club’s benefit for many years now, and Brian is to be congratulated on combining his Presidential duties with regular coaching, and acting as an official (usually Chief Time-Keeper) at numerous Track, and also Cross Country, fixtures. Brian leaves the club in sound condition, both from the athletic point of view, and financially, and he will be a hard act to follow.

“The Executive Committee, which manages the club, was also elected at the AGM. Why not have a look on this website (‘Club Information’ – ‘About The Club’) at who is looking after the affairs of the club, and the roles they undertake? There is likely to be one further co-opted member of the committee, to represent the Junior Development Group, who run the Wednesday Development Evenings, which are attracting 80/100 youngsters to the track every week, even in the depths of winter!  Perhaps the most significant change to the committee is that Robin James takes over from David Rees as Chairman. David came to the club from a non-athletic background when his sons, Dylan and Gil, joined, and bravely volunteered to take the chair when the vacancy arose. David‘s chairmanship brought a refreshing ‘outside’ view to the management of the club, from which it has benefited greatly, and we are grateful to him for taking on this task. Fortunately, David and Mandy, David‘s wife, intend to continue their involvement with the club, for instance assisting at fixtures we organise, as they have so willingly done in the past, and their sons are continuing as active members of the club. We remain in very safe hands with Robin, who has long been actively involved with the management of the club, such as on the Executive Committee, carrying out a number of roles, including preparing us for our Club Mark accreditation, and also away from the club, as a fully qualified Field Official, and as Chair of Dorset AA, so Robin brings unrivalled experience to the committee’s chairmanship.  An unusual situation occurred at the AGM, in that there were two candidates for one post, namely Marketing Manager.  Fortunately, an election wasn’t necessary, as both candidates propose to work together.  Lisa Shepherd is James Lelliott‘s mother, so has had a close involvement with athletics for many years, and Lisa‘s work background provides ideal experience to carry out this role.  Zak Kerin is well known to us, as an athlete and a coach, and is well placed to understand the marketing needs of the club.  I wish Robin, Lisa and Zak, and all other members of the Executive Committee, every good fortune in continuing with the club’s successful management.

“We are now approaching the Track & Field Season, and the Quadkids, starting with the club’s Spring Open Meeting at Kings Park on Sunday April 12.  I look forward to reporting on team and individual successes, both in these and on the Road, where both our Mens’ and our Ladies’ teams won the Dorset Road Race League last year, at the club’s Presentation Evening in November.

“Finally, not quite athletics, Brian‘s first task after his election as President was to write to Eddie Howe congratulating him on AFC Bournemouth‘s promotion to the Championship League.  The way things are going on the other side of the park, who knows………………..no, I won’t say any more – we don’t want to tempt providence!!”