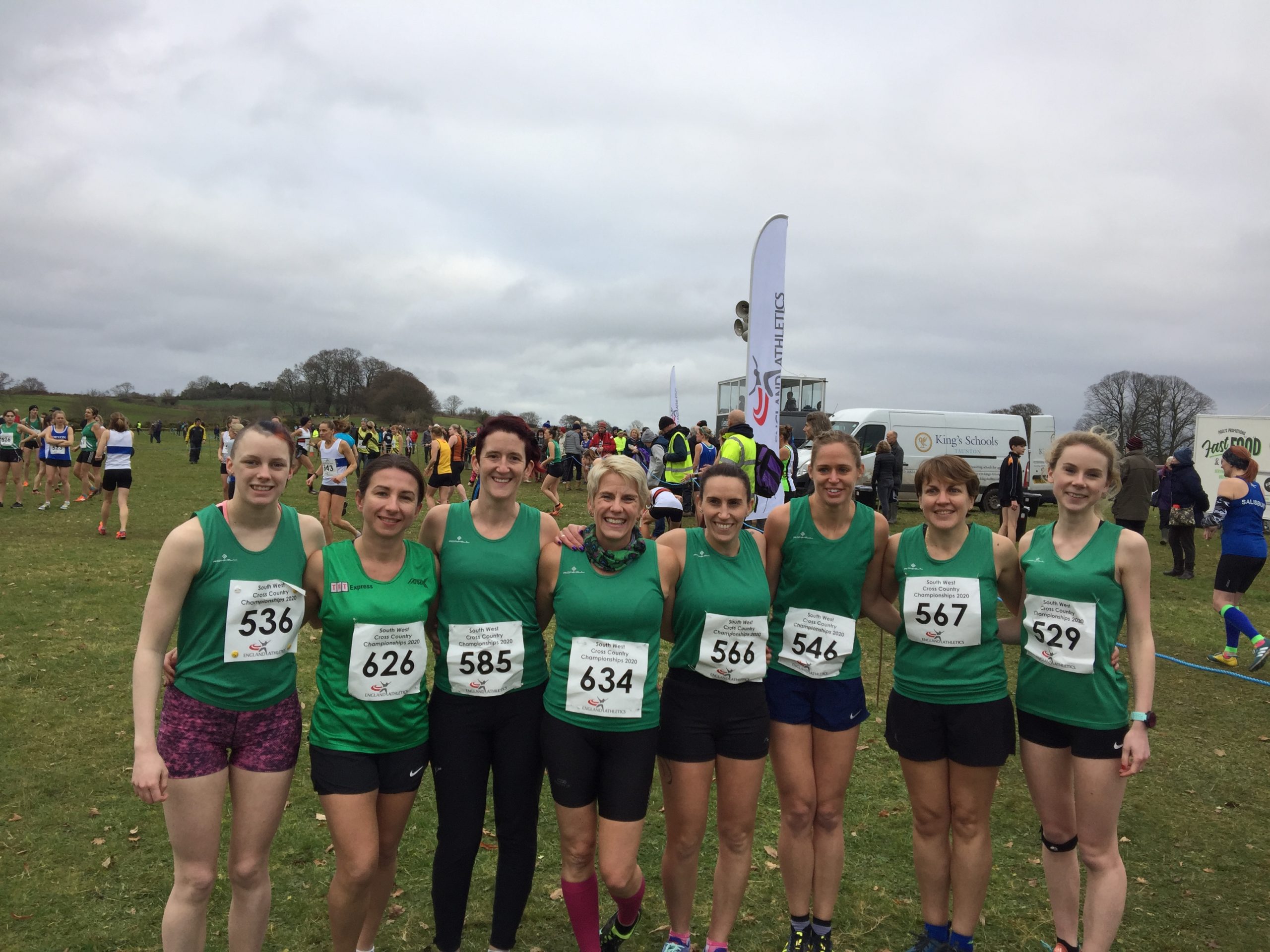 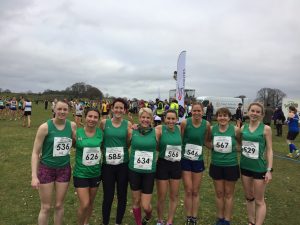 The Dorset senior women’s team line up for their race in the South West Inter Counties match at Aldon Hill, Yeovil 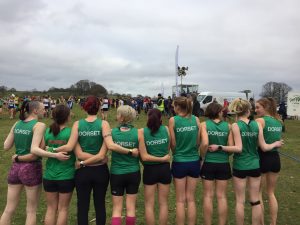 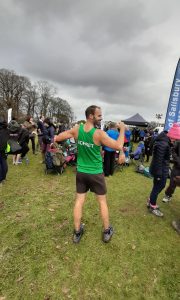 After competing in the same event last year, Rich Brawn was proud to be back in back in Dorset green 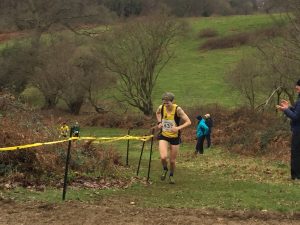 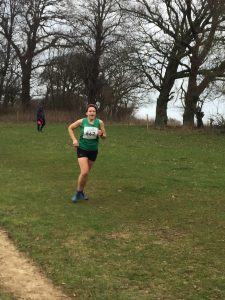 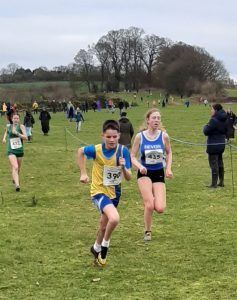 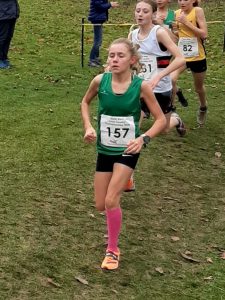 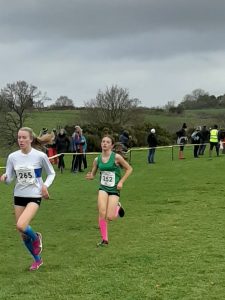 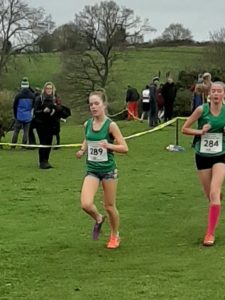 As already mentioned, the fixture on 15 December 2019 was, as well as the County Championships, the third fixture of the Wessex Cross Country League. More than 30 BAC athletes (including 10 U13 Boys) competed, and there were some excellent performances. Particularly noteworthy runs came from William Launder (4th U11 Boy) Esmee Hurst Atkins, Katie Kilburn and Isabel Cherrett (1st, 2nd and 5th U11 Girls respectively) Oscar Ewen Matthews (2nd U13 Boy) Richard Brawn and Brandon Meredith (9th and 11th Senior Men respectively) Erin Wells (2nd U13 Girl) Neve East and Martha Preece (2nd and 4th U15 Girls respectively) and Jasper Todd and Oliver James (2nd and 9th U17 Men) with Tom Farwell completing the U17 Men’s BAC team not far behind Oliver.

For the second consecutive time in the Wessex League, Holly Collier won the Senior Women’s race. She hadn’t entered the County Championships though so the honor of becoming Dorset County Champion went to her BAC teammate Harriet Slade who finished 2nd in the race. 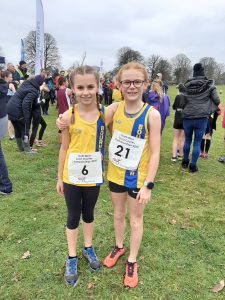 At the conclusion of this fixture, the third in the Wessex Cross Country League season, BAC athletes occupied some of the top aggregate positions for the season – William Launder 3rd U11 Boy, Esmee Hurst Atkins 1st U11 Girl, Isabel Cherrett 2nd U11 Girl, Oscar Ewen Matthews 2nd U13 Boy BAC‘s U13 Boys’ team was 2nd on the day), Richard Brawn 1st Senior Man, Erin Wells 2nd U13 Girl (BAC’s U13 Girls’ team was 3rd on the day), Neve East 1st U15 Girl and Martha Preece 3rd U15 Girl. 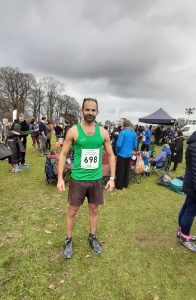 The Inter-Counties fixture at Yeovil on 5 January 2020 was also the final fixture of the Wessex Cross Country League. However, as yet, no specific league results have been posted so at the moment it is difficult to determine individual and team places. However there were some excellent runs at Yeovil and it is likely that, for instance, Richard Brawn, Erin Wells, Oscar Ewen Matthews, Neve East, Martha Preece and Oliver James will feature amongst the top athletes. Jasper Todd was going well at Yeovil but unfortunately had to withdraw during the race. Jasper, one of BAC‘s most promising youngsters, went on to win his age category race at the Dorset Schools’ AA Cross Country Championships at Kings Park on Thursday 16 January, so it would appear he has made a speedy recovery! 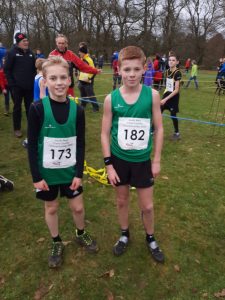 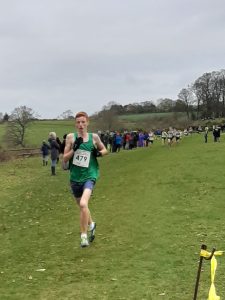 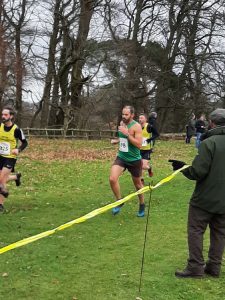 As well as the high scoring BAC teams referred to above BAC‘s senior mens’ team was 2nd aggregate for the season after the 15 December 2019 fixture. However, BAC‘s top scoring man was wearing neither a club nor a county vest and may therefore not count for the team which will dramatically impact the club’s placing at Yeovil. The athlete in question also did not count as part of the Dorset team which meant the Dorset Senior Mens’ team was 5th in the Inter-Counties instead of 4th. There will be a further report, should the final detailed Wessex Cross Country League results be published. 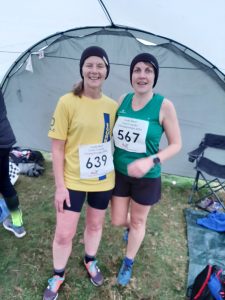 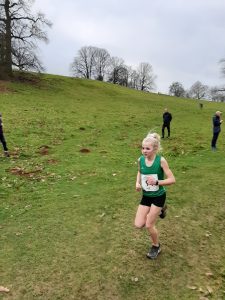 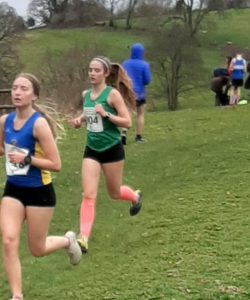 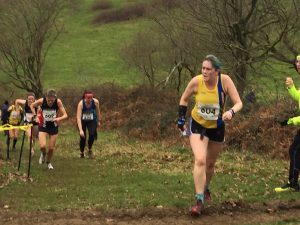 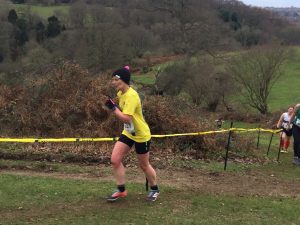 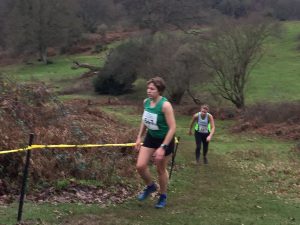 The penultimate fixture of the Hampshire Cross Country League took place at Prospect Park, Reading on Saturday 11 January. There were BAC teams in the Senior and Veteran Mens’, Senior and Veteran Womens’ and U13 Boys’ races, and individual BAC athletes in the U17 Mens’, U17 Womens’ and U15 and U13 Girls’ races. The Senior Mens’ team of Jacek Cieluszecki, Rob McTaggart, Alex Goulding, Stuart Nicholas and Richard Brawn (with Steve Ross providing the vital backup should anything go wrong) were 7th team of 10 on the day, and are also 7th aggregate for the season.

A strong team performance at the final fixture at Popham on 8 February should secure BAC‘s position in Division 1. At this stage of the season Jacek is the leading Veteran Man of the league. One feature of the race at Reading was that, for the first time, Poole AC‘s Senior Mens’ team finished above BAC‘s (they were 5th) and as they lie in 8th aggregate position there is a risk that Poole AC could finish above BAC at the end of the season. Jacek and Alex were joined by Jud Kirk to form BAC‘s Veteran Mens’ team, doing well to finish 7th of 20 teams and are a highly creditable 5th aggregate for the season so far. 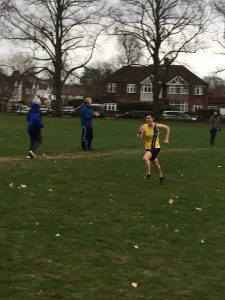 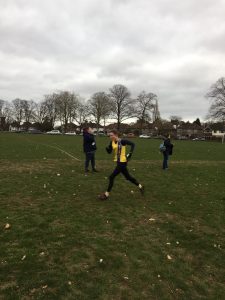 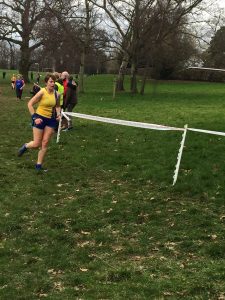 Amongst the younger age categories, there were particularly noteworthy runs from Oliver James, Oscar Ewen Matthews, Neve East and Erin Wells. Oscar, who led an U13 Boys’ team consisting of himself, Sam Brewer and Isaac Sandell, is 5th U13 Boy of the league, and his team were 7th of 9 on the day, 9th of 11 aggregate. Erin is 6th U15 Girl of the league. Lauren East and Anya Sandell made up 2/3 of an U17 Women’s team, and Martha Preece supported Neve to make up 2/3 of an U15 Girls’ team. Hopefully at the next and final fixture these two teams can be complete. 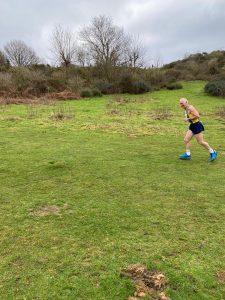 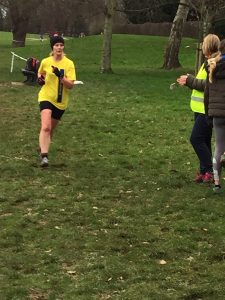 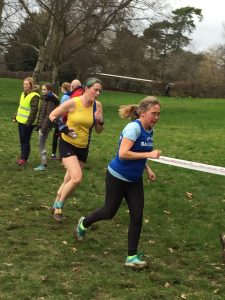