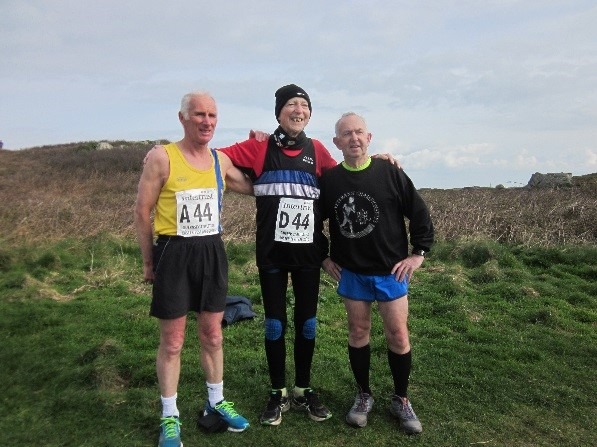 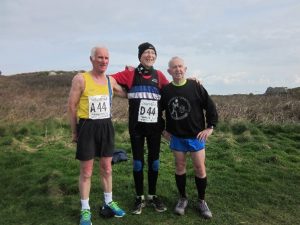 BAC ‘supervets’ (explanation later) Ian Graham and Dave Parsons made the trip to Guernsey this Easter for the Running Festival which comprises four races in four days. It is fair to say that they are stalwarts of this event with Dave competing for his 20th successive year and Ian for his eleventh time in the last 12 years.

With Easter being so early this year, they were a little concerned about the likely weather (the forecast was pretty awful) and both were travelling with no great expectations as Ian had only just returned from a walking holiday in Yorkshire which had hampered his preparation and Dave had done very little training following a recurring calf injury which restricted his ambitions to merely getting through all four events without injury.

Good Friday dawned cool and wet although, for once, there was very little wind so the conditions were a lot better than expected. For the first race (5k road), the rain was quite light and Ian ran strongly to finish in 138th place (238 finishers) in 23:35. Dave found himself running quicker than expected and was going quite well until he was sick just before the 4k mark! Nevertheless, after a brief stop, he continued and was satisfied with his 174th place finish in 25:46.

Both were competing in the ‘super vet’ category which comprises all those over 60 and is based on ‘Age Graded’ performance. Ian was 3rd male with 74.06% and Dave 6th with 66.36%. 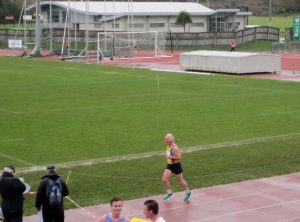 Ian striding towards the finish of the 5k 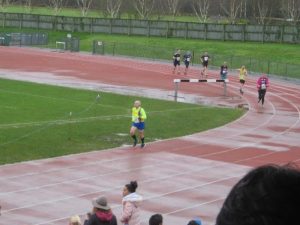 Dave finishing a little while later

The second race of the series was held on Easter Saturday over the ‘full course’ cross country course on L’Ancresse Common and is the only race which has remained the same every year of the Festival. Although very windy, the rain held off for the majority of the time.

Ian, knowing that he was now in with a chance in the ‘super vet’ category went off very purposefully and with the underfoot conditions much better than anticipated, ran a highly respectable time of 38:32 and finished in 69th place (125 finishers).

Guernsey Island Athletic Club have produced their very own ‘age graded’ table for this event (no idea how they have done this) and Ian was a clear winner of the Mens Super Vet category with 74.35%. Dave’s plan for the race was to start off steadily and see what happened. Unsurprisingly this resulted in an extremely steady time of 45:54 for 108th place and 7th male ‘super vet’. 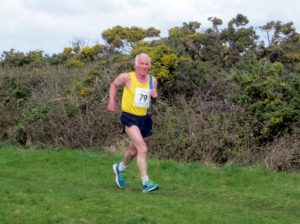 Ian looking far too cheerful at the finish 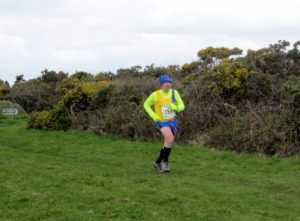 Dave making sure he didn’t get too cold!

Easter Sunday’s event was the 4 x 1 mile cross country relay race on the far part of L’Ancresse Common and is part of the ‘Stonecrusher’ course. The good news is that this is not part of the overall series and so is really just an opportunity to mix with the younger (and unfortunately much quicker) athletes who seem to skip around the quite tough course with two short but steep hills.

Ian and Dave submitted a team sheet with just the two of them on it and the organisers of the festival found them two other athletes who were not part of any full team either. The second good bit of news was that the first of these runners was another Easter Festival regular, Richard Batchelor from AFD. Our final runner was to be a newcomer (an 80 plus year old) who had come last in the first two races and by some considerable distance at that!

This was fine in that there was absolutely no pressure on Ian and Dave. Ian ran the first leg in 7:14 (very similar to last year) and came in 35th of the record entry of 50 teams. Dave set off as hard as he dared on the very uneven rabbit hole ridden course and ran 8:23 and we had dropped to 41st team. Richard flew round in 5:22 and we were now up to 30th! As expected, Peter was by far the slowest of the day, however, he did manage to hold on to 49th place so we weren’t last!! 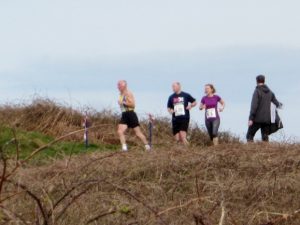 Ian at the top of the first steep ascent 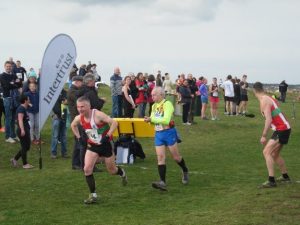 Dave handing over to Richard Batchelor 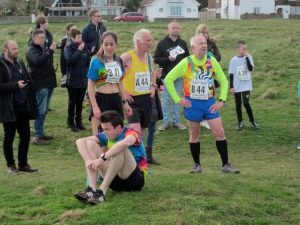 Ian and Dave ’relaxing’ after their legs!

So now for the last race, the 10k road race on Easter Monday on the point to point course from Grand Rocks to St Sampsons. The early morning weather was atrocious with torrential rain and strong winds. Dave took the hire car to the finish and caught the second of the runners’ busses thankfully provided by the organisers. However, he arrived at the start with over an hour to go.

Meanwhile, Ian had opted to jog to the start from the nearby hotel. There was a baggage vehicle provided which left five minutes before the start. Dave managed to take off numerous layers of clothing that were needed to keep warm and dry and made the decision to keep wearing his leggings for the race to keep his legs warm and protect his calf. (He later confirmed that he just couldn’t be bothered to try to take off the leggings). Ian with the overall super vet title at stake, went off in very determined fashion.

For most of the race, the wind was favourable until turning towards the finish with 2k left when it became a strong headwind. Ian seemed to take this in his stride and finished in a time of 47:29 and 97th place (212 finishers) and was a very deserving winner of his category with 76.13% and thus the overall winner.

Dave was very happy to get round with his calf intact and although it was his slowest ever 10k race by some considerable margin, he was happy with 54:30 and 153rd place (64.95%) and with Brian Holden about one minute behind, Dave was 5th male in the category overall. 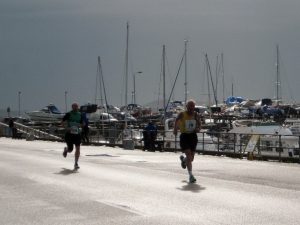 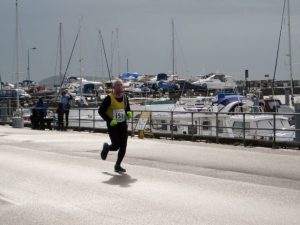 Dave looking splendid in his leggings!

It was back to the hotel to shower and change for the Presentation in the afternoon where there was the usual opportunity to relive the weekend and chat to old friends. There was even the chance to reflect on a much better performance in the Quiz which was held on the Saturday night, swapping last year’s rather inglorious wooden spoon success with a mid-table performance finishing 9th of 17 teams. 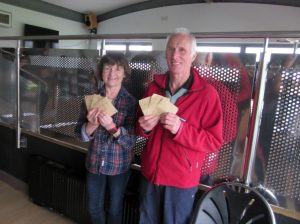 After another terrific year they now have the 2019 festival to look forward to. And just 12 months to get fit for it!