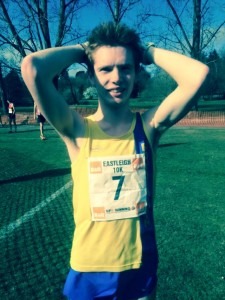 David Long continued to demonstrate the benefits of Kenyan training by running a PB of 31.12 in the Eastleigh 10k on 22 March, finishing 7th of a field of 2171. The remaining four BAC athletes competing in the race also ran well, with Jacek Cieluszecki 14th, and 1st V 35-39, in 31.54 (taking him to the top of the 10k Championship Table), Josh King 26th in 32.57, Jamie Grose 36th in 33.20 and Anthony Clark 38th in 33.35.  The quality of this event is clear from the fact that, despite all these impressive performances, BAC was the 4th Mens’ team!

The day before, the Parkruns took place as usual, but an unusual feature was that Paul Hill won at the Bournemouth Parkrun in Kings Park, instead of his traditional second position.  Paul‘s time was a PB, the previous PB having been set the week before.  Thankfully, the second position was occupied by a BAC athlete, namely Phil Mosley, making a welcome recovery from injury.  Also amongst the 326 finishers at Bournemouth were Jud Kirk, Steve Cox and Will Price.  Meanwhile, over at Poole Park, two BAC athletes, Graeme Miller and Helen Ambrosen, finished amongst the 622 who completed he Poole Parkrun, with  Graeme Miller running a PB to finish 5th.