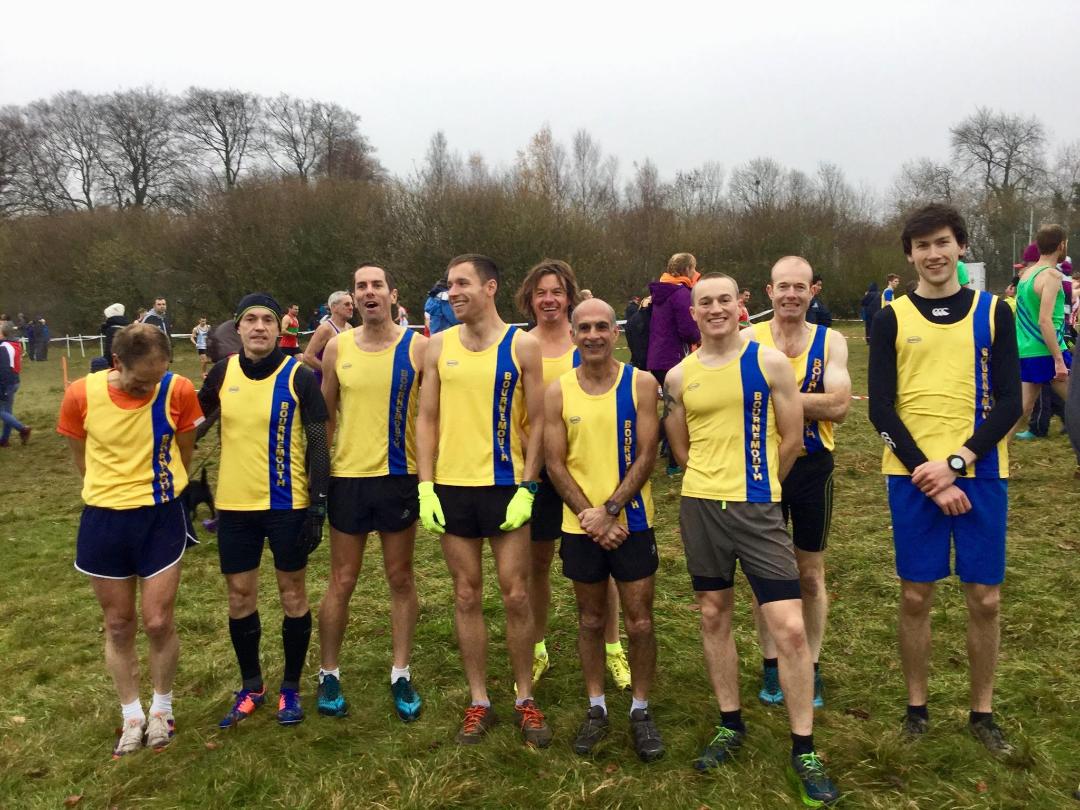 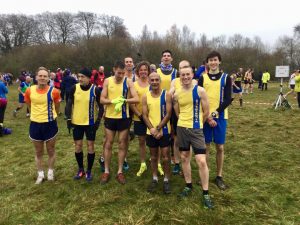 The third fixture of the 2017/18 season of the Hampshire Cross Country League took place at Popham Airfield, Basingstoke on Saturday 2 December, and, although BAC‘s teams weren’t quite as strong as at the previous fixture at Queen Elizabeth Country Park, the Senior and Veteran Men and Senior and Veteran Women are all ranked towards the top of their respective tables leading, hopefully, to a satisfactory, at least, conclusion to the season. We welcomed Laszlo Toth and Theo Irvine, competing for the first time in the yellow and blue vest, and Craig Palmer, who competes for BAC as his second claim club in order to run in this League, continues to make a very valuable contribution.

However returning to the good news, Dave Long, who led the Mens’ race for much of the way, was first of the BAC athletes to finish, followed very closely by Craig Palmer – Dave and Craig were 8th and 9th respectively so an excellent foundation!  Rob McTaggart, Josh Cole and Steve Way completed the BAC Senior Mens’ team, with Steve leading the BAC Veteran Men, the team being completed by Pat Robbins and Sanjai Sharma.  On the day, BAC‘s Senior Men were 5th of 10 complete teams in Division 1, and are 3= aggregate for the season so far.  Aldershot, Farnham and District will never be caught (as ever!), but Southampton, in second place, are within sight, but the real battle is amongst BAC, Reading and Basingstoke and Mid Hants, all of whom are so close that one stutter, or one brilliant performance, could make all the difference.  It isn’t just about the leaders, though.  It was a real pleasure to see 13 BAC men competing with the BAC vest everywhere. 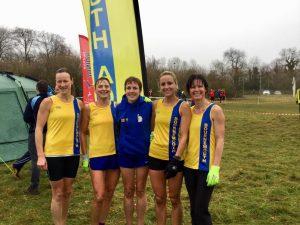 The ladies, too, had a very successful day with Harriet Slade, Nikki Sandell and Joy Wright making up the Senior Womens’ team which finished a highly creditable 6th of 19 complete teams, the aggregate position being 7th of 21 teams.  Yvonne Tibble completed the Veteran Womens’ team (with Nikki and Joy), which finished an excellent 3rd of 12 complete teams on the day, and remain 3rd aggregate for the season of 14 teams.  Kirsty Drewett was on hand to provide the vital back up should this have been needed.

With the best two performances so far counting, BAC athletes are beginning to appear in the top 10 individual aggregate positions.  Of the Senior Men Dave Long is 6th and Craig Palmer 10th.  Steve Way is 6= Veteran Man, and in the Veteran Women table Emma Dews is 4th and Nikki Sandell 9th.

So, with three fixtures gone and two remaining it’s all to go for.  Your club needs you at Reading on 13 January and Aldershot on 10 February! 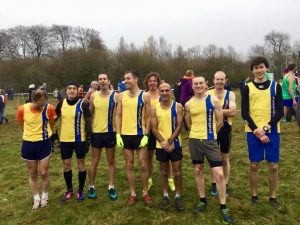 The yellow and blue army were out in full force