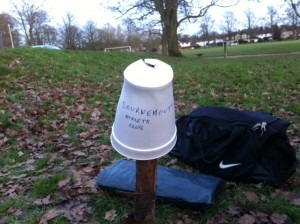 BAC‘s Senior Men may just have done enough at the penultimate fixture of the 2014/15 Hampshire Cross Country League, at Prospect Park, Reading, on Saturday 10 January, to avoid relegation to Division 2, whereas BAC‘s Senior Ladies enjoyed another excellent team result. In addition, we welcomed Anthony Clark, running in a BAC vest for the first time, and, although Anthony was unable to count as part of BAC‘s team, as he has already competed in the League for another club this season, his finishing position amongst the leaders shows what a valuable acquisition Anthony will be for us. 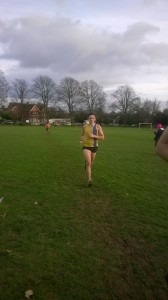 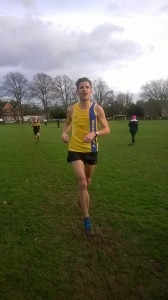 Anthony Clark races in a BAC vest for the first time

Josh Cole led our Senior Men, Simon Munro not far behind (followed closely by Anthony), and third for BAC was Robin Copestick, showing good form after a lengthy break through injury. Ross Smith was next, clearly benefitting from his frequent and successful gruelling off-road duathlons, and, completing the BAC team was Nick Kenchington, a regular Hampshire League competitor. The outcome of the day was that BAC‘s Senior Men were 6th of teams on the day, and our aggregate position for the season is 8th, one position above relegation. There is a considerable gap between BAC and the 9th team (and, at Reading, the team scored fewer points than the top team of Division 2), so relegation may have been avoided, but it could still occur without a good result at the final fixture at Kings Park, Bournemouth on 7 February.  Perhaps it’s also worth mentioning that, at the Reading fixture, with Nick supported by Steve Cox and Ian Graham, BAC actually produced a Veteran Mens‘ team, which, on the day, was 5th of 8 completed Veteran Mens‘ teams. 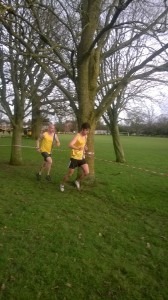 Robin Copestick and Ross Smith battle it out 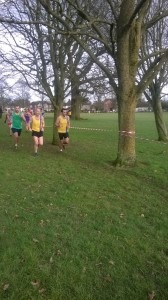 Mike Cowham and Steve Cox with another lap to go

As already noted, BAC‘s ladies had an excellent day at Prospect Park, with the team of Nikki Sandell, Heidi Tregenza and Cherry Sheffrin, with the ever-present Louise Price as back-up, finishing 6th of 19 (yes, 19!) Ladies’ Teams.  Unfortunately, having missed an earlier fixture, our ladies don’t count towards the aggregate positions, but Nikki Sandell at present lies 6th (of 62!) in the Veteran Ladies‘ aggregate table for the season, the table being compiled from the best 3 performances to date. 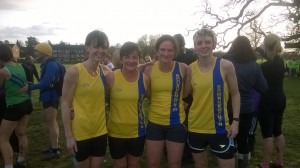 Another noteworthy performance at Reading was from Tom Farwell, who was 21st of 62 in the U13B race.  Tom, with Jim Dence and Conor Charlwood, made up BAC‘s fourth team of the day, finishing 8th of 10 U13B race.

Although Bridget Dence wasn’t competing at Reading, it’s worth noting that in the aggregate positions for the season so far, Bridget is 2nd U17W of a total of 33.

So, well done and thank you to everyone who turned up at Reading, not just those noted above, and we look forward to some good results at the Kings Park fixture, which is being hosted and organised by BAC.