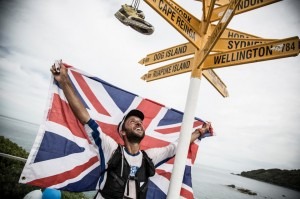 Those of us who were privileged to attend Jez Bragg‘s presentation entitled ‘Exploring New Zealand the Hard Way: The Te Araroa Expedition’ at the Allendale Centre, Wimborne on Friday evening 2 May will certainly recommend anyone to go should there be a repeat. It is no exaggeration to say that Jez held a large audience spellbound for well over two hours. We had, of course, followed Jez‘s progress at the time through social media, but the presentation really brought home the difficulties, the pleasures, the emotions and the challenges faced in the expedition. This was a journey – mostly running – using only human power on foot, in kayak, and a small amount of cycling from the Northern tip of the North Island to the Southern tip of the South Island of New Zealand, and, yes, the Cook Straight between the two, normally a lengthy ferry crossing, was achieved in a kayak. We learnt about the potential danger this presented, and other dangers such as crossing wide fast-flowing rivers and how measures were taken to ensure safety. We learnt about the contrasts between a non-existent trail through impenetrable forest and running through cities and, occasionally, on well-established almost tourist trails with the novelty of actually seeing other people. At a time when we are celebrating, quite rightly, Steve Way‘s British 100k record it is worth remembering that Jez‘s 53 day traverse of the Te Araroa Trail is itself a record, and the 50 day target would have been reached had it not been for a stomach illness which laid Jez low for 3 days, and would have caused anyone else to give up altogether. We also learnt something about New Zealand itself and its wild and remote terrain which truly turned Jez‘s run into an epic adventure. This was a breath-taking presentation – not to be missed if given the chance!
Of course Jez recently ran his way to County Marathon Silver Medallist, as is reported elsewhere, but just a week before his marathon run, both Jez and Gemma Bragg (who also ran the marathon and won the Ladies’ County Silver Medal) had competed in the Fellsman 100k, a fell race across the Yorkshire moors, starting in Ingleton, and immediately crossing Ingleborough and Whernside, two of the Yorkshire ‘Three Peaks’, and continuing over other summits to finish at Threshfield, near Grassington. Jez was third -yes third – in a time of 11 hr 28 min, with Gemma a little longer in just over 17 hours, an incredible run considering the last runner took over 29 hours. Of the 383 who started, 93 retired and 5 were disqualified, leaving 285 who finished (Gemma was 94th). The race goes over tough terrain, with about 5% road, 15% trail and the rest moorland and bog, with 11,000 ft of climb. The weather was wet and windy to start, with dense fog on the climbs, but after a few hours things cleared up, which was a great help as competitors have to navigate themselves around the course! So congratulations to Jez and Gemma on simply completing the race, let alone on their impressive times. And a week later they were both marathon silver medallists! 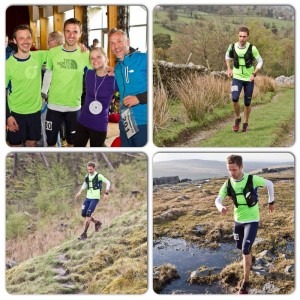 Jez and Gemma Bragg and the Fellsman 100k 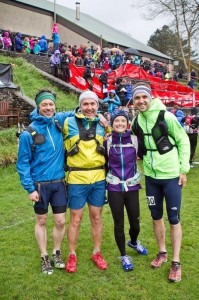 Jez and Gemma Bragg at the Fellsman 100k