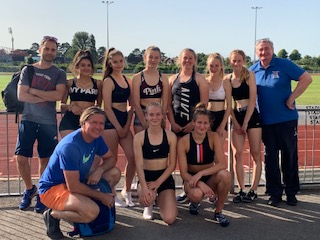 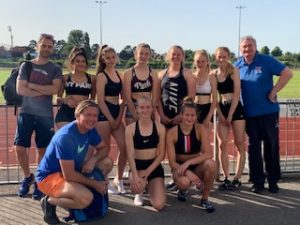 The athletes with their coaches Zac Kerin, Tim Ward and Paul Rees.

Congratulations To BAC Athletes Selected To Represent Their County At The 2019 English Schools’ Athletic Association Track And Field Finals.

Nine BAC athletes have been selected to represent Dorset or Hampshire Schools at Birmingham on Friday 12th July and Saturday 13th July at The ESAA Track and Field Finals.

The following eight athletes have been selected to represent Dorset Schools:- 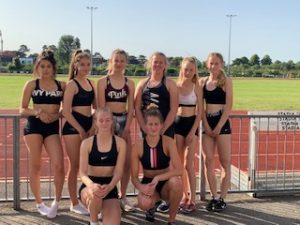 The English Schools Athletics Track & Field Competition and Finals first took place in 1925 and has continued every year since except during the Second World War. It is the fourth biggest sports completion in the world and the biggest held over two days.

There are three categories of counties in the competition. The biggest counties, including Hampshire, (Category A) with a secondary school population of over 100,000 are allowed to select up to sixty athletes. Those with a population of between 60,000 and 100,000 (Category B) are allocated a lower number. Dorset, with a population below 60,000 (Category C) are now allowed to select up to 32 athletes.  To be selected an athlete normally has to reach at least a specific “English Standard” time or distance based on their age group, gender and event.

BAC hope the athletes, parents, relatives and coaches enjoy the trip to Birmingham. Hopefully the athletes can stay injury free and rise to the challenge of the size and intensity of the event. Judging is of the highest order. Any minor error, normally going un-noticed, is sure to be picked up at this event, so please check all the rules and regulations for whatever event you are participating in.