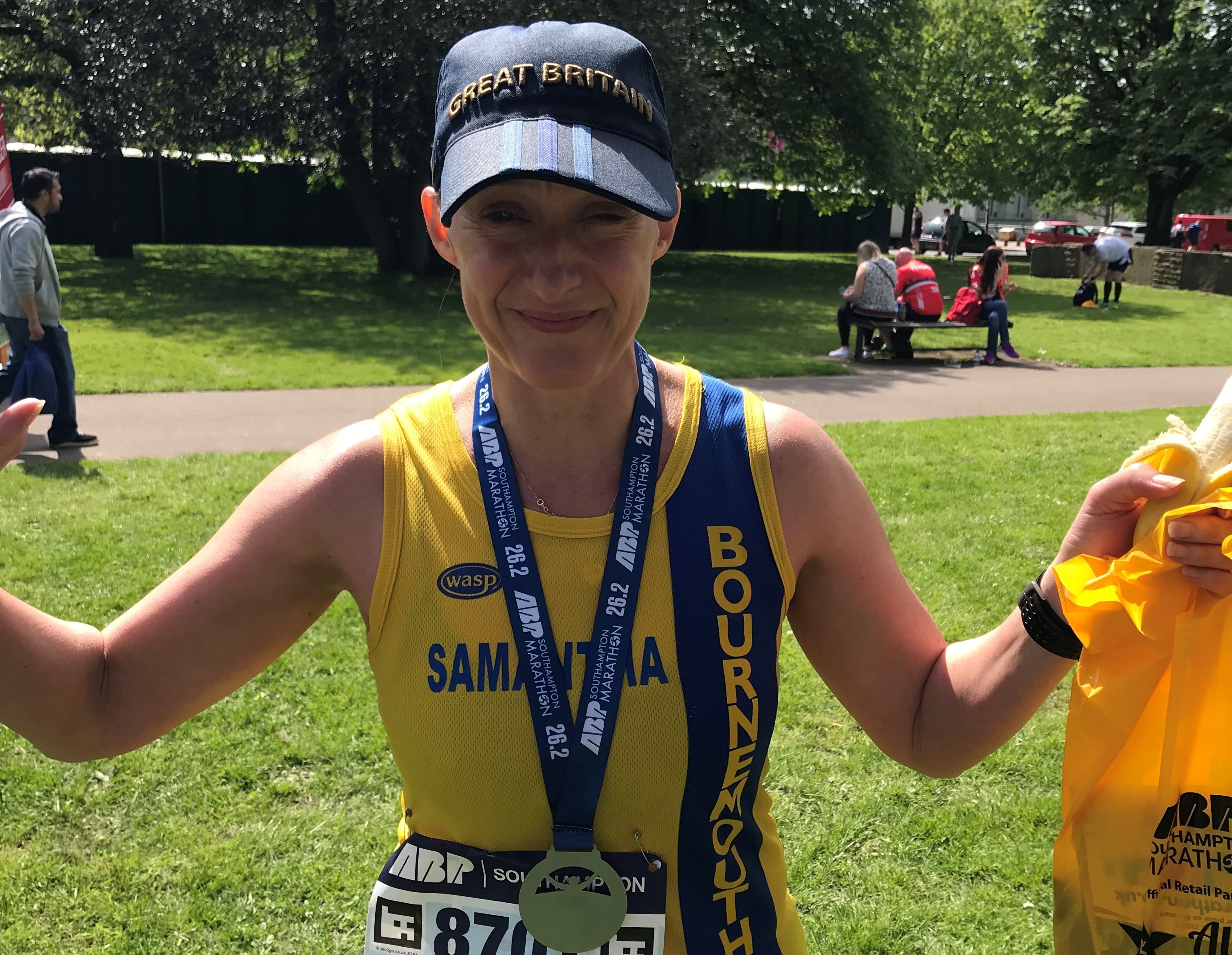 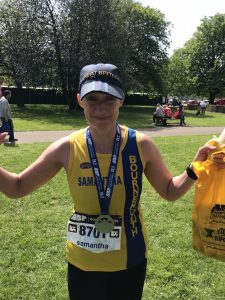 Your first marathon is always going to be a nerve wracking experience. It is the culmination of three months of hard graft. All those long, draining weekend runs and then back out there again the next day before the body has fully recovered. It’s always an arduous task to get fully prepared and get into the best possible shape before taking to the start line for the 26.2-mile adventure. Then, after all that training, the pressure is really on to perform on the big day to make all the blood, sweat and tears worthwhile.

Choosing the ABP Southampton Marathon for her first attempt at the distance, Sam Laws was going on a journey into the unknown. She’d certainly done her due diligence though, putting the high mileage in in training and getting out on those long training runs every Sunday.

Sam had undertaken most of her training with her friend Julia, who is a member for Christchurch Runners, and it was a big day for both of them, with Julia competing in the London Marathon on that very same day. 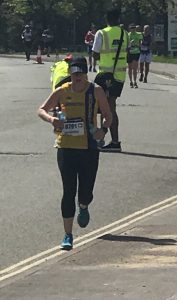 Also representing Bournemouth AC in the ABP Southampton Marathon that day was Billy McGreevy. After forgetting to register in time for the London Marathon, Billy turned to Southampton as a backup option.

Having trained for a sub 2:50 marathon, Billy was optimistic about performing well. There was always the weather to take into consideration though. In the days leading up to the race a mini heatwave and swept the nation, resulting in sky high temperatures for the time of year.

Under normal circumstances, that would be fantastic, but if you’re running a marathon, it could potentially be disastrous. Given the weather conditions, Billy decided to adapt his race plan accordingly, with the intention to go off a bit slower.

Once the race started though, the adrenaline kicked in and, enthused by the many onlookers and the buzzing atmosphere, Billy set off pretty quickly. Despite the heat, he reached the half way stage in 1 hour 26 minutes, which was actually ahead of schedule. He felt good though at that point so he wasn’t worried.

The course was two loops around Southampton, incorporating four trips over the Itchen Bridge and twice through St Mary’s football stadium, home to the mighty, or perhaps this season no so mighty, Southampton FC. 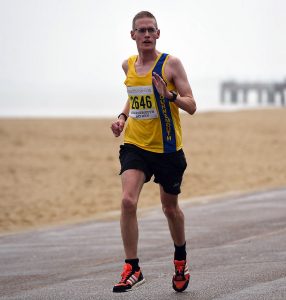 Reaching the half way stage of the race in 1:26, Billy was going well at that point despite the heat

By the time he’d climbed the Itchen Bridge for the third time though, at around 16 miles, he knew a sub 2:50 wasn’t on the cards. Then at 22 miles, he blew up. His legs began to cramp up and he was really struggling with the heat.

He soldiered on though and managed to make it to the finish, crossing the line a time of 3 hours 4 minutes and 41 seconds. Although it wasn’t the time he had targeted and trained for, given the outrageously hot weather, it was still a very good effort.

That put Billy in 23rd place overall in a field of 1,103 people. That’s not a bad return by any stretch. It’s always disappointing as a runner when you don’t hit your targets of course but sometimes the conditions just don’t allow you to reach your full potential. That was certainly the case for Billy. It was still a decent effort though and one he should be fairly proud of when he looks back on it. 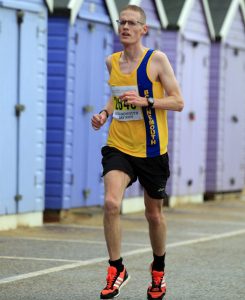 Billy encountered some issues around mile 22 when his legs began to cramp up but he persevered and made it to the line in 3:04:41

As for Sam, given that it was her first marathon, she was understandably feeling very nervous and emotional on the morning of the race. She kept to a steady pace in the early stages, fully aware of the enormity of the task that lay ahead.

Clutching her bottle of Lucozade, she carefully negotiated her way through the course, eating jelly beans every 45 minutes to keep her energy levels up and regularly dousing herself with bottles of water to try to keep cool. This was much needed on such an unusually hot day for the time of year. 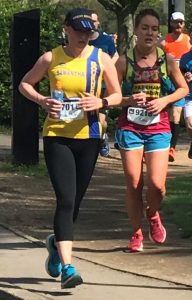 Although she was nervous to being in with, Sam soon settled down and found her rhythm once the race had started

The crowds were fantastic and buoyed her on with their cheers of encouragement. Sam was particularly pleased to see the familiar face of her friend Claire as she crossed the Itchen Bridge for the third and fourth times which gave her a much-needed boost.

After crossing the bridge for the fourth and final time, Sam was now 19 miles. She’d kept in mind the pre-event advice of making sure she fuels herself well in the first half of the race and don’t go too hard until after mile 18 as that will feel like the half way point. It’s always so much tougher in the latter stages of a marathon. 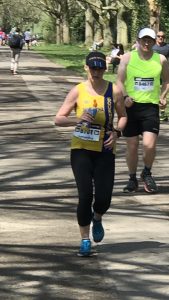 Following the advice she was given beforehand, Sam took it quite steady for the first 18 miles

After passing the 22-mile marker, Sam was now into completely new territory. She’d been up to 22 miles in training but never any further. By this point her legs had started to burn and ache. She was hurting and her legs were beginning to stiffen up.

She changed her running gait to extend the legs a little further in an attempt to try and free them up. This seemed to help a little so she kept it up. Soon she found herself passing through Riverside Park toward the 25-mile point where she spotted her partner and fellow BAC compatriot Ian White.

Ian gave her a bottle of water, which she primarily used to throw over herself. In return she hurled a half empty bottle of Lucozade at him. Just in case he needed a refreshment as well. This gave her the final push and she knew she was nearing the end. With less than a parkrun left to go, she knew she could do it.

Managing to keep her pace, she passed the 26-mile mark and the finish was almost in sight. As she turned around the last corner, the very welcome sight of the finish flags came into view. The noise began to build as she approached the finish line. The clock showed a time of 4:24:39, which meant she had achieved her goal of a sub 4-hour 30-minute finish. 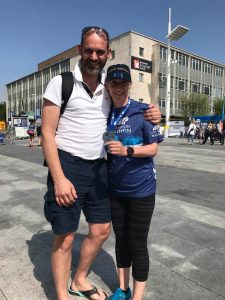 In tears as she crossed the line, Sam stopped her watch and made her way through the finish tunnel. She received her medal, bag and t-shirt and went to meet up with Ian, at which point more tears arrived. She felt amazed that she had completed the distance and very proud to have achieved her target.

Sam’s official time was even more impressive at 4:21:20. That put her in 500th placed overall and made her 70th lady. She was also placed 25th in the V40 category. All-in-all, a very pleasing result for Sam and thoroughly well deserved after all the hard work she’d put in.

Later on, she discovered that Ian had more blisters than her, having covered over 10 miles in flip-flops whilst out supporting her. He was promptly told to man up though as this was Sam’s day. She had done it. She had completed a marathon! 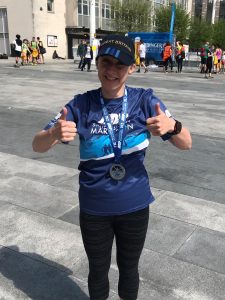